Kubernetes is an enterprise architecture

Kubernetes is an enterprise architecture

Five years ago, in the Pivotal Cloud Foundry days, we had a lot bravado. We almost challenged people, dared them to do something radically different. The mindset of doing daily releases, collapsing together multiple roles into product teams (business analyst-cum-product manager, developer, designer - this second a totally foreign concept to most enterprises) and then automating so much infrastructure that ops people were sort of not needed - it was a lot to process if you were a VP of Infrastructure in 2015, or even a CIO.

We would call this an “opinionated” platform. Brian Gracely was the first I remember to thoroughly describe what was going on here. His distinction between structured (“opinionated”) and unstructured platforms was great. We should have hired that guy! :)

Whatever it was called, opinionated/structured meant that meant that we’d made choices about how you architect your application, packaged it, instrumented it, and run it. To get all the benefits - for it to even work - you’d have to follow these opinions. Early on, these types apps would be described as something like “12 factor apps” using microserves. I think we call them “cloud native” apps now.

I kept making the analogy to J2EE, seemingly like that weird old uncle who can’t stop talking about the Korean war or Regan. J2EE had (has?) a lot of opinions about how apps are architecture, networked together, packaged, instrumented, deployed, and run in production.

In both all these cases, what we have is an application architecture, also an operations one. To be that old guy: just like we had with J2EE. This is incredibly valuable.

Having a standard that vendors and enterprises follow is valuable because:

Overall, all parts of the tech industry should want to standardize on the app architecture and platform approach.

When it comes to kubernetes, we all get so wrapped up in it being, I don’t know, like cool skate board tricks (it’s hard to do, you break your bones a lot, but boy it’s cool when they work) that we forget this architecture standard benefit. I don’t think we even discuss it that much: to find the architecture you have to (as I’m doing here) take out a paint brush and carefully dust away the dirt like you’re extracting a fossil.

Now, there’s a lot left to be done. For example, in one of the podcasts below, Nate and I discussed when you’d put something as simple as circuit breaker in service mesh (like Istio), a container sidecar or containerized pod-buddy, or in-app code. When you don’t standardize that early on, we end up putting that kind of code in every component and layer which is wasteful and confusing. You know: inelegant.

Anyhow. Realizing that there’s an architecture there is, you know, needed. And then after that, we all need to start nailing it down now.

I’m not really a fan of the “making the technology boring” framing (I mean, it’s fine, just not the contrarydiction I’d choose), but it’s making a point that I agree with: once you get kubernetes all up and running, all you have is a blinking cursor and a whole new series of problems to solve. You have to design a whole distributed application architecture and operations methodology, and the tools that go with it. And then you need to get budget, time. and staffing to decide on that, test it out and refine it, implement it, and (like, a year later), you’re still at a blinking cursor. Then you can write your applications. Or, you could skip all that, and just go with the architecture that’s already there.

But, hey, that’s just my opinion.

From The Name of the Wind: 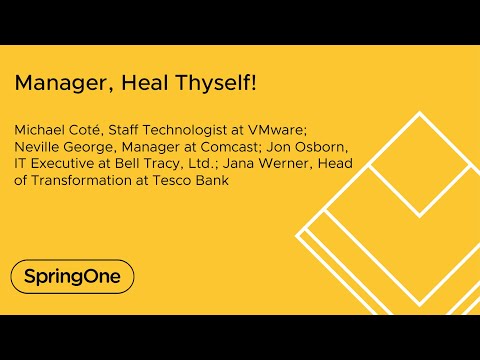 Manager, Heal Thyself! - The panel I put together and moderated for this year’s SpringOne. It turned out really well. Here’s the abstract: When you’re trying to improve how your organization does software, how do you change what managers and executives do? We hear a lot about how developers and operators change, the composition of product teams, and always about Kubernetes. But there’s very little conversation about transforming management. This panel of managers will discuss what managers’ and executives’ roles new and old look like, managing managers, and how individual managers can manage their careers when their role changes.

App modernization at an airline

This is one of the talks I was looking forward to at SpringOne. It’s about the airline I fly, KLM. I’m always hungry for stories of regular companies modernizing regular apps. It didn’t disappoint. 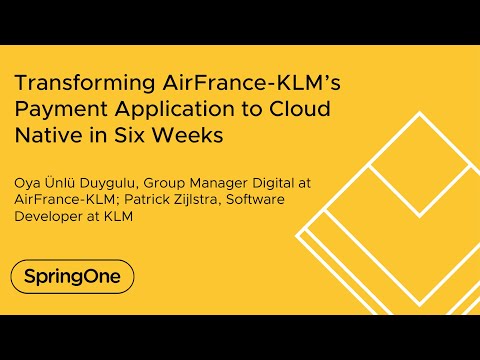 Here’s my notes and highlights on it as well.

I value talks like these tremendously because they’re “real world,” not the alternate reality of tech companies.

I don’t find stories and lessons learned about and from Spotify and Netflix too helpful or convincing or helpful for, you know, regular companies. As one review of Reed Hoffman’s advice put it:

Hastings’ real superpower as a manager — one that he never really admits to in the book — is that, thanks to the gravity-defying Netflix share price, he isn’t cash constrained. In fact, the more cash he burns, the more valuable his company becomes.

If you’re in that situation as an enterprise, you play by a different set of rules, constraints, but also opportunities. Airlines couldn’t be further than “isn’t cash constrained.” So, stories about how they manage to do better at software are incredibly helpful for that ongoing study. Plus, they’re a Pivotal/VMware Tanzu customer!

Lessons learned from modernizing the 12 year old payments system at Air France KLM. There’s a lot about managing stakeholders, planning what to modernize from a monolith, and getting staff to work in a new way.

I spend too much time trying to get my 20+ years of notes, common place books, writing, and shit organized. I’ll be an old man soon and will want sift through all that shit to figure out what the fuck happened to that bright, optimistic version of myself that thought the future was great. That little fucker was so happy and indomitable!

At the moment, I’m trying DevonThink. It’s kind of overwhelming, but I think it will work well.

DevonThink’s syncing approach is stupidly complex. In the sync section in their manual, they start by saying “it’s really quite simple” or the like. Anytime a manual says that, it means it’s actually complex and confusing. There’s a lot of steps and you have to bend your mind around local database files, storing database files on Dropbox, and, I don’t know - it’s confusing. Every other app that syncs across mobile and desktop has one step: login to Dropbox (or iCloud). Then you’re done.

Also, I really, really want an app like Evernote, DevonThink, Ulysses, Drafts, DayOne - whatever - that just uses pure files instead of it’s own database. I want that system to be an overlay for a bunch of sprawling directories. I don’t think such a system exists (“it’s more optimal for searches to be in a database,” blah blah, I’m sure). I really liked Roam Research, but it was all online and with no mobile app. Microsoft OneNote is close (it’s actually very similar to DevonThink with it’s weird file-based databases thing).

Anyhow, we’ll see. DevonThink also has a huge community that answers lots of questions and creates all sorts of extensions

I wish Evernote had just continued to evolve instead of becoming such as weird cul-de-sac of mid-2000s thinking.

With kids, all bets are off

Up to that point in my life, there had been surprisingly few instances in which I could not defeat a problem with hard work”

What the swag-set are up to

From 13 Things Mentally Strong People Don’t Do: Take Back Your Power, Embrace Change, Face Your Fears, and Train Your Brain for Happiness and Success

Cool story, bro, but it left off item 14: the chemicals in their brand aren’t all fucked up.

Still, in so much as I’m always looking for the script and character-mask I can put on when I need to deal with life, it’s a good list of what that movie looks like.

Follow my blog if you want to see these during the week. I often add additional commentary to the links there that doesn’t show up here (e.g., developer landgrabbing).

You just read issue #148 of Coté's Wunderkammer. You can also browse the full archives of this newsletter.