You can never step in the same digital transformation twice

Getting excited about work has become hard. The struggle is doing the same thing over and over. There are two things there.

First. The kubernetes world has won among all us platform competitors from the past five or more years. All of us were fighting a PaaS war, but the industry and buyers turned out to just want IaaS. Kubernetes is low level, the operating system to the stack of software development. This means that the stack above it has to be built, enterprises are now waking up to the need to build a development stack ontop of kubernetes. They’ll discover the need to change how they do software, build out the technologies, and so forth. This what we were doing at Pivotal in the past five years, and our competitors were doing. Once Docker, Inc. fizzled out, Kubernetes stole the focus from the application layer several years ago. You could argue that “events” (Kafka) were happening, and “microservices,” but I don’t know: that seems very early. Anyhow: now we’re back at the beginning of explaining how to do software better.

Second. Part of that is that no matter if it’s PaaSes or kubernetes, so much of the market is immature. You can see this in the recent State of Agile survey: 36% or respondants do continuous delivery, just 30% do test-driven development. Getting people to follow good, long proven software development practices is a never-ending battle. It’s little wonder that software failure rates have remained steady for over 25 years.

So many organizations are using old methods to create and run their software, and, therefore, thier business. IT still hold back the business. They don’t seem to “get it” about innovating their businesses.

You see this in the last 40 - 50 years of business theory and books. The same ideas are put forward each time: explore what people want to buy, experiment with better ways of operating, always be learning, and power it all by treating your employees like smart humans instead of dumb machine parts. Most businesses don’t even have a grasp on what their business is, what their customers want, and how they’re operating.

Narrowed down to software what usually means is that doing any change will improve things, at least in the short and medium term (in a three to six month window). But that’s because how the company was operating previously was so bad - often whatever process the company is current following not “anything,” just a kitchen junk drawer that’s accumulated over time.

It’s like taking up better eating and exercise if you haven’t been doing anything. You’ll get great results simply because you’re doing something.

As they say: you can’t change if you don’t change.

That’s a cynical mindset to have, at least that perspective.

But, it can also be positive. Change isn’t a mystery, you don’t need to understand the bottomless bucket of agile methodologies out there: you have all the tools you need, you just need to do something.

Once you’ve started, learned how to be mindful of how your organization functions, what it’s purpose is, you’ll start to find waste in the system. You’ll finally see all that junk in the kitchen drawer. You start getting rid of the junk (who really needs a boiled egg sliver?), buying more time to pay attention to your customers and how to best help them with software and business changes.

Most people get stuck on cleaning out that kitchen drawer, and us vendors love it! We have new utensils to sell you - we have whole new drawers and if you’re an enterprise whole new kitchens!

Kubernetes is a great kitchen drawer.

But if you don’t change how you cook, how you eat, how you determine what the fuck you actually want to do after using all that new kitchen stuff: who cares? You’re just building the new stack that us vendors will sell replacements for in ten years.

It turns out to be positive and helpful. In that same State of Agile survey, people report good results that are helpful to the business. That’s where the motivation comes from and has to be renewed from: people, organizations, and the software we use from them actually gets better once they decide to. Their software often gets a lot better.

Still, getting there is repetitive.

Download my books that explain it all for free!

I struggle with being a parent. Like many people in their early twenties, at the time, I didn’t anticipate kids. And now I have three. My life is mostly something that happens to me - I’m super fortunate and all that, yes. How I react to that external force is what I do well, but I’m not pro-active.

It’s exhausting. And worse, I have no guide on both deciding what to do and what to be happy about. I don’t really know what I’m supposed to be (like), what the baseline for “normal” is.

There’s some kind of therapeutic response that must work on other people because I always hear it: there is no normal, everyone is different, what ar your values?, and so forth. These all seem well intentioned but are like pissing in the wind to me.

I am aimless and don’t understand my life, my role in it, how to improve and innovate. I don’t really even know what I want - again, who I am or want to be. I just follow and float in the ever changing river.

I am become Junk Enterprise Modernization! (Sadly, no free books for you to download on this topic.)

(3.) The product is the employee’s comp.

One the largest lies by omission in corporate life is that the primary product of a company is the employment of the workers. This gets less true as you trickle down to, like, factory work and other low skill work (which mean, you can hire “anyone” to do the job so it’s low paid and you can, evilly, treat the people doing it as just another component in your machine). But when it comes to white collar work, the primary goal of all staff is to stay employed.

We see this with handsomely paid executives, but even more so with staff. Executives often flight away to new jobs (you know, the whole they only stay 18 months in any job folklore). Each employee is doing their work on that deliverable.

If that work aligns well with “make stuff that customer wants to buy” or even “increase shareholder value,” great! But those are only incidental activities and effect to staff. You only do those things if it improves your pay and the stability of your job.

Boards and executives are clever as they’ve used large equity grants to make executives shareholders, and thus aligned to that principal. Large equity grants happen widely in tech companies as well, but as I understand it, not in many other industries. Little wonder that regular staff don’t always help achieve the “increase shareholder value” goal, then.

But pay close attention to this hidden goal. It comes up as “career development”:

Compensation and job security are incredibly important, and mostly ignored or deliberately made mystic and impolite to talk about.

People do a better job if they feel safe and well paid. That’s everyone’s number one priority.

A new tiny video on how people subvert to word “agile” to do nothing: 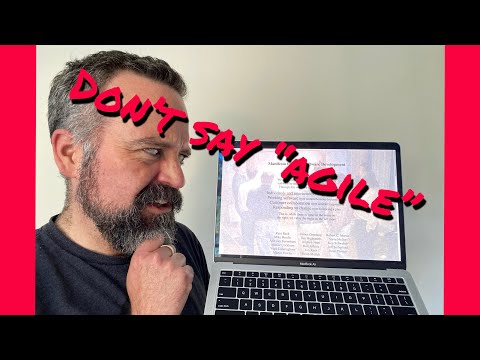 This week: What is a ThousandEyes, Cisco’s acquired businesses and oddly named BUs, nailing your bi-annual performance review. Plus, a review of ChefCon online.

> When the weather is nice, Barksdale-Perry also encourages her team to go outside, go for a run, do yoga on their decks, or really any activity that makes the most sense for them. In doing so, she added that it’s important for managers to lead by example. > > “They are looking to you—and so when I tell people ‘get up and go outside,’ I plan to do the same thing for an hour and I tell them ‘hey, I’m going for a run this morning, you know, you should go out and get up and do it as well.”

Here, we see a daily tactic in place. When culture change is going on, you want people to do new things, follow new norms. Otherwise, you’re not really transforming.

Managers have to not only tell employees that they should – they have permission to – follow new practices and norms. The managers have to do them as well. Either we hang together, or we hang apart.

Original source: Federal Managers Should Model Self-Care for Their Employees.

You just read issue #141 of Coté's Wunderkammer. You can also browse the full archives of this newsletter.