Haven’t you always wondered what Donald Duck’s nephews are called in the various European languages? Follow this link to get the equivalent data about Donald himself, Mickey Mouse, the Smurfs, the Flintstones, and Donald’s very rich uncle – who, as we learned in The Last Days of Disco, is also very sexy. “To lean over the side of the hanging bridge across the Yang Sang Chu and peer through the prayer flags toward the forests beyond is to allow hundreds of years of faith and history and old-growth Nature wash over you. The little “secret river,” ever in a hurry, rushes around Devakota en route to its meeting with the Siang. Mist, like the very breath of the gods, rises from thickly knitted canopies. Rocks are swaddled in moss mats an inch thick and dripping with moisture. I cup my hands beneath one and drink the water that drips into my palms. It is sweet, and cold, and life-giving.” – Arati Kumar-Rao, in a fascinating essay. 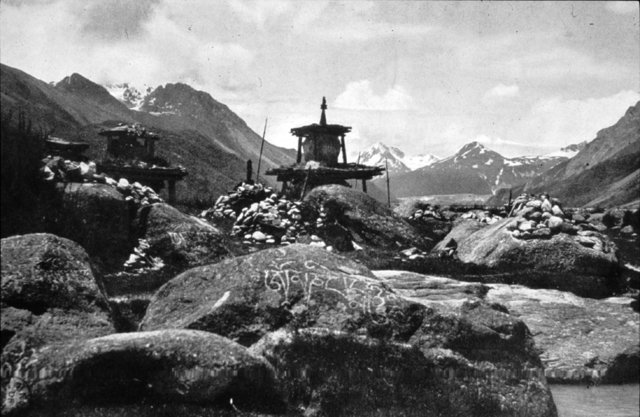 That’s a photograph taken in 1911 by Frank Kingdon-Ward, an English botanist and explorer who wrote a book about the region Kumar-Rao describes. You may read a long and fascinating, if rather academic, essay by Erik Mueggler about Kingdon-Ward here. The essay deals in the critique of imperialism and the reading of material practices, as any self-respecting academic essay in our time must do, but I keep thinking that Kingdon-Ward ought to be the subject of a Terrence Malick movie. Here’s a moving tribute by Nick Cornwell (who writes fiction as Nick Harkaway), to the decades-long collaboration between his parents David and Jane Cornwell – David being better-known as John le Carré:

As they both became ill in their later years, it only revealed the extent of the mutual support and mutual dependency. They might struggle, as everyone does after 80, to remember things in casual conversation, but in work each could rely on the other to make the connection, to pick up the slack when a brilliant but ageing mind suddenly stuttered. As a team – more, as a single process functioning between two people, defining them both – they were immune to the halting state.

It was a wonderful thing, but the more painful, when he died rather abruptly in December, to see her deprived of the other half of her way of thinking across five decades. She was casting around for who might be holding the part of herself that she had vested in him, looking for the rest of the process that was trying to continue in her – hence the search for the missing material, the determination to keep going, because to stop working was to die again.

I have begun work on what I expect will be a long, chaotic, fissiparous, recursive meditation on the theology of culture on my blog. All posts with the relevant tag are here. If more than a dozen people are interested in this I will be shocked. You just read issue #122 of Snakes & Ladders. You can also browse the full archives of this newsletter.