Something a little different this time: a meditation on a single subject. 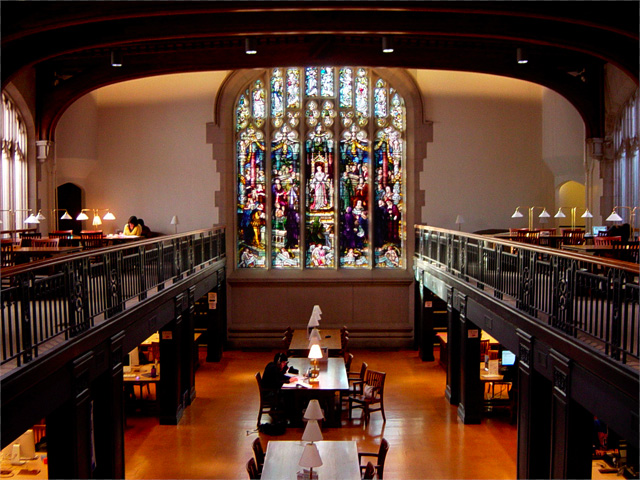 A few years ago I gave a talk at Vassar College and got to spend some time in Thompson Memorial Library, and I thought: I could live here.

Fewer people (faculty as well as students) are checking out books from university libraries. A fascinating look by Dan Cohen at the phenomenon: “What’s happening here is much more complicated than an imagined zero-sum game between the defenders of books and library futurists. The decline in the use of print books at universities relates to the kinds of books we read for scholarly pursuits rather than pure pleasure, the rise of ebooks and digital articles, and the changing environment of research. And it runs contrary to the experience of public libraries and bookstores, where print continues to thrive.”

Dan concludes with a thought that I endorse: “As beautiful as those libraries appear—and I, too, find myself unconsciously responding to such surroundings, having grown up studying in them—we should beware the peril of books as glorified wallpaper. The value of books, after all, is what lies beneath their covers, as lovely as those covers may be.” It’s understandable that with the rise of e-reading people would wax nostalgic and enthusiastic about what was missing: cover design, binding, typography, aroma. But if you pick up a book, admire its cover design and typography, note the well-sewn binding, stick your nose into the pages and inhale deeply, and then reverently replace the book on the shelf, you are rather colossally missing the point of a book.

The library is having a moment right now. The Library: A Catalogue of Wonders by Stuart Kells (2017), Palaces for the People by Eric Klinenberg and, The Library Book by Susan Orlean (both 2018), have appeared recently, to join a handful of existing works on the subject, the best of them, I think, being Library: An Unquiet History by Matthew Battles (2004).

Admittedly, many of us don’t use libraries any more, but for those who do, it’s impossible to overstate how indispensable the service is. Particularly in communities characterised by poor education, low opportunity and high levels of stress, the library is an engine room of social mobility where people go to complete college and job applications, get help filling out forms to access benefits and bursaries as well as accessing the internet and books to learn new skills or find information. People who enter a library are actively trying to better themselves in some way and often lack the basic resources or skills to reach their goals. When you are in a public library, you are in the presence of people who are attempting to take a massive stride forward in their often chaotic and stressful lives.

When I was in graduate school at the University of Virginia in the early 1980s, I spent a lot of time in Alderman Library — for obvious grad-student reasons but also because my wife worked there — and more often than not, as I crossed the curving street that ran alongside the library, I noticed the same car parked in the same spot. The four-door sedan was noticeable because it was filled with papers: newspapers, magazines, and thousands of photocopies, scattered randomly across the back seat and on all the floor space. (The papers that surrounded the accelerator and brake pedals were filthy, ground into a kind of pulp.) The trunk of the car sagged over the rear wheels: presumably it was filled with papers also.

The car belonged to a man named Jack Manahan, who taught history at the University, but was best known as the husband of a notorious woman. Her birth name was Franziska Schanzkowska, and she was later known as Anna Anderson, but she claimed to be Anastasia, the youngest daughter of the last Tsar and Tsarina of Russia, Nicholas and Alexandra. She said that she had survived the massacre that killed every other member of the family. This was not true, but she and Manahan spent years and years trying to convice the world that she was who she said she was.

The Manahans, though they had plenty of money, lived in absolute squalor and often ran afoul of Charlottesville’s Health Department: they were pathological hoarders. (A local nickname for them was “the Bizarre and the Bizarrina.”) But an acquaintance of mine who spoke to Manahan occasionally at the library said that Manahan had told him that the papers in the car were all devoted to Anastasia’s case. The Manahans treasured the belief that the information that would prove her claim once and for all was located somewhere in Alderman Library — in a book hidden in some dusty and ignored corner of the stacks, in documents filed in some dutifully catalogued but infrequently consulted archive. The knowledge that proves, the knowledge that saves, the knowledge that settles debates and determines the course of law — it’s all there. In the library.

You just read issue #29 of Snakes & Ladders. You can also browse the full archives of this newsletter.