Two weeks ago, I failed in my duty to my readers: I forgot to remind you all of the coming of an Ember Week. I am sorry. But you may remember them in the future this way:

Fasting days and Emberings be
Lent, Whitsun, Holyrood, and Lucie.

Obituaries of the odd:

Take the mathematical prodigy Simon Norton (1952-2019). He was unteachable at school level and had to take maths lessons at the University of London. He soon wound up in Cambridge, doing rather less than had been expected of him – latterly alone in the bottom of his own house, where one of his tenants, Alexander Masters, made him the subject of a book (The Genius in My Basement*, 2011). His abiding interest was in British public transport. Though it says that he only took to the bus timetables in the 1980s, men who were at school with Norton remember how something to do then was to stop him in the corridors and sling him the names of random pairs of towns: “Oi, Norton! Llandudno to Eltham! Frome to Blairgowrie!” Without missing a beat he would cough up the recommended bus itinerary, with all times and changes in place. Norton’s was a lonely life; and no sentient person can remain unmoved to think he never met another inhabitant of Farndale’s book, Raymond Butt (1941-2018). A physics teacher in, alas, Canterbury, Butt had memorized the entire British Rail timetable, and collected train tickets to the extent of having to move himself, and them, to larger premises. He could do the itinerary trick and would perform it on demand. What larks he and Norton might have had together. What a double act they could have made.

I did meet an undeniably grade-one thinker in my first year at Oxford. I was looking over a small bridge in Magdalen Deer Park, and a tiny mustached and hatted figure came and stood by my side. He was a German who had just fled from the Nazis to Oxford as a temporary refuge. His name was Einstein.

But Professor Einstein knew no English at that time and I knew only two words of German. I beamed at him, trying wordlessly to convey by my bearing all the affection and respect that the English felt for him. It is possible – and I have to make the admission – that I felt here were two grade-one thinkers standing side by side; yet I doubt if my face conveyed more than a formless awe. I would have given my Greek and Latin and French and a good slice of my English for enough German to communicate. But we were divided.... For perhaps five minutes we stood together on the bridge, undeniable grade-one thinker and breathless aspirant. With true greatness, Professor Einstein realized that any contact was better than none. He pointed to a trout wavering in midstream.

My brain reeled. Here was, mingling with the great, and yet helpless as the veriest grade-three thinker. Desperately I sought for some sign by which I might convey that I, too, revered pure reason. I nodded vehemently. In a brilliant flash I used up half of my German vocabulary.

For perhaps another five minutes we stood side by side. Then Professor Einstein, his whole figure still conveying good will and amiability, drifted away out of sight. 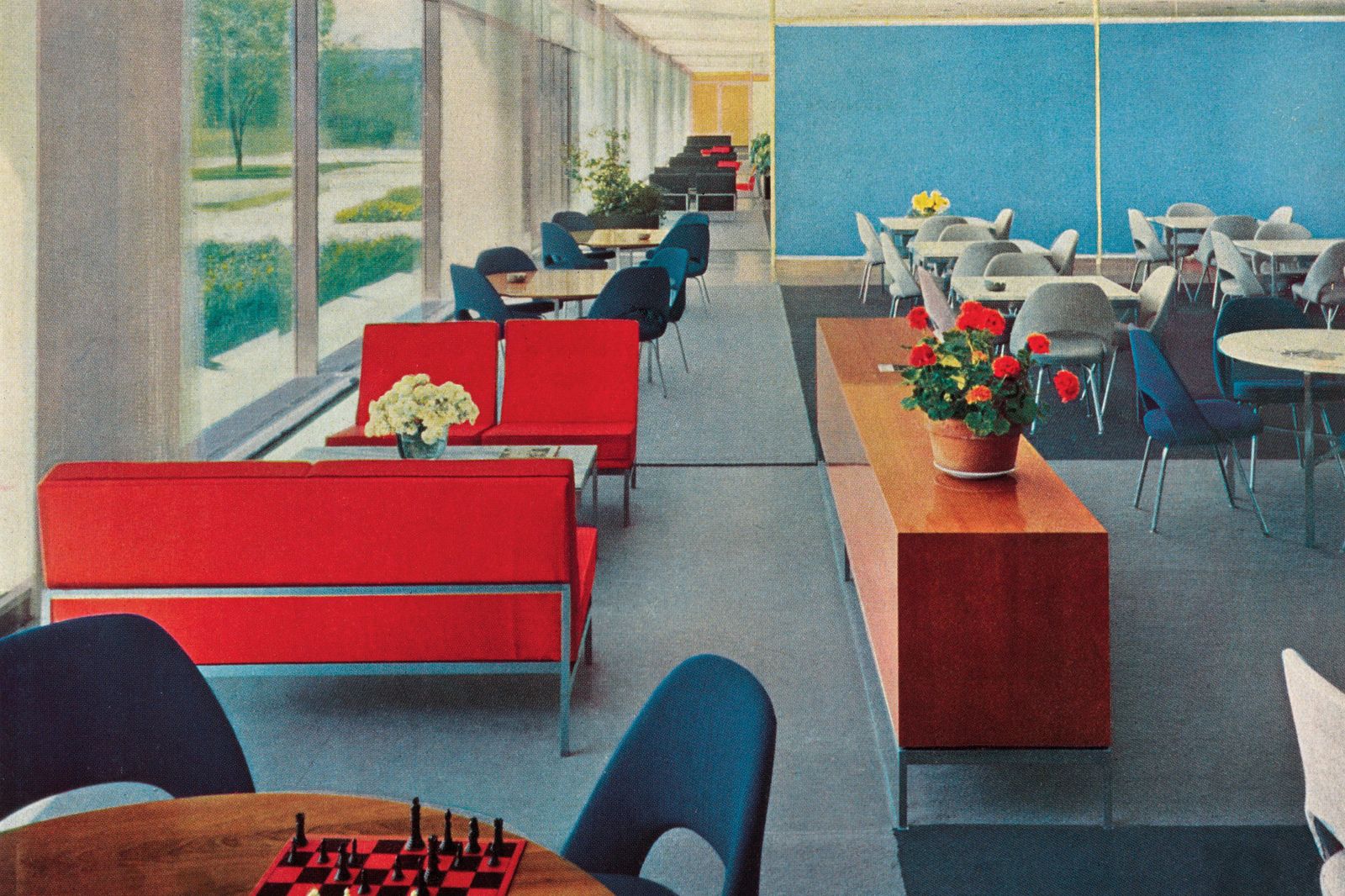 WSJ: “With her human-centered approach to corporate interiors, Florence Knoll (née Schust) nearly single-handedly reinvented the postwar American workplace. From communal lounges to art-covered walls, Knoll deserves credit for the more residential comforts that are hallmarks of desirable offices today. As architect, interior designer and entrepreneur, perhaps no other person did more to popularize modern design than Knoll. The eponymous company that she co-owned with her first husband, Knoll, manufactured some of the most iconic modern furniture pieces of the midcentury era — many of which are in production today.”

I find it delightful that there’s a website called Film and Furniture, where you can buy furniture and furnishings from your favorite films and TV shows. I mean, who doesn’t want a little piece of the Overlook Hotel in their living room?

Steve Albini is a music producer/engineer whose legendary studio in Chicago I walked past many times before noticing that it was there.... Anyway, here’s a terrific video of Steve explaining the particular challenges and opportunities involved in recording acoustic instruments. Maybe too geeky for some people, but I ate this up.

While I’m on the subject, way back in 1993 Albini wrote an epic rant about what’s wrong with the music industry. It contains passages like this:

Then vintage microphones were all the rage (but only Neumanns, the most annoyingly whiny microphone line ever made). The current trendy thing is compression. Compression by the ton, especially if it comes from a tube limiter. Wow. It doesn’t matter how awful the recording is, as long as it goes through a tube limiter, somebody will claim it sounds “warm,” or maybe even “punchy.” They might even compare it to the Beatles. I want to find the guy that invented compression and tear his liver out. I hate it. It makes everything sound like a beer commercial.

And said industry is about ten times worse now. But at least most engineers have rolled off the compression a bit. See the details on the excellent Wikipedia page about the Loudness War.

The blog has been busy.

You just read issue #182 of Snakes & Ladders. You can also browse the full archives of this newsletter.