Today I just want to talk about dogs.

1) Some people roll their eyes at the praise we dog-lovers tend to sing. These skeptics think we celebrate dogs too extravagantly, offering them the kind of attention that should be given only to other human beings. They think our affection for dogs marks a kind of decadence. These people are wrong. Indeed, if the anthropologist Pat Shipman is right, homo sapiens may have survived when Neanderthals didn’t because of dogs. If dogs are a large contributor to our very existence, then we owe them more, not less, praise than we give them.

2) The same people I just refuted are also likely to say that we anthropomorphize dogs, attributing to them human traits – loyalty, affection, etc. – that they don’t really possess. When I hear this claim I am reminded of the book that established the reputation of the philosopher Alvin Plantinga, God and Other Minds, which contends that the many of the same arguments used against the existence of God could be equally well used against the existence of other minds. Similarly, when people say, “Dogs aren’t really affectionate, they merely exhibit evolutionarily adaptive behaviors that resemble affection in order to manipulate us,” that’s an argument that could be equally well applied to our human loved ones. I choose not to be that cynical about love, whether of other humans or of our canine friends.

In short, dogs are wonderful and I won’t hear anything spoken against them, or against humans’ love for them. 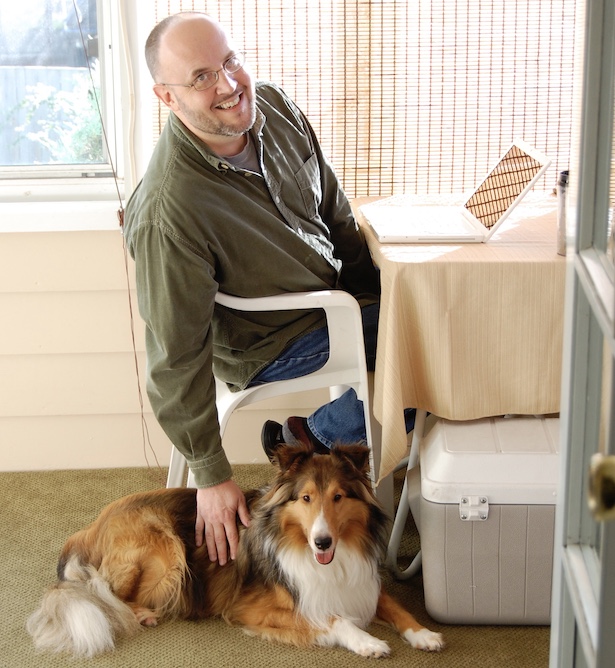 That’s me with our dog Malcolm in 2008, on the sun porch of our much-loved house in Wheaton, Illinois. Malcolm was a rather self-contained sort of character. He never sought to be petted or embraced, though he would accept, with a certain patient dignity, affection when it was offered to him. But he very much wanted to be wherever his people were. Maybe it was the herd dog in him, but he liked having us in his sights. He was most content when we were all in a room together.

Over the last couple of years my movements in our current home in Texas have been somewhat limited because of Malcolm. He began, as many older dogs do, to have difficulty navigating wooden floors. So that led to my more or less abandoning my preference for working at our dining room table, because you can’t get to that table without crossing wooden floors. When I sat at the table Malcolm would sometimes stand at the edge of the nearest rug and try to work up his courage to cross the expanse, but eventually he gave that up. Here’s what turned out to be the last photograph I took of him (in which you’ll see how much his coloring darkened over the years): He sat there peacefully enough, but wanted to be closer. So I moved to where he was, and then he lay down and took a nap.

My friend James Davison Hunter has argued that the essential task for Christians in society is to exhibit “faithful presence,” and that strikes me as exactly the right phrase to describe Malcolm’s role in our family life. He was always faithfully present. He didn’t ask a lot from us; he didn’t demand attention; but he was comfortingly, reassuringly there. And when he became too frail to follow me wherever I happened to be in the house, then it was my turn to be faithfully present to him, in the places where he could be at ease.

Since Malcolm died, last week, I am able to go anywhere in my house at any time. And that makes me sad. Being faithfully present to one another is a discipline, but it’s a discipline that grows into a habit, and a habit that grows into a comfort. The freedom I’m experiencing right now seems to me to have been bought at too great a price. I preferred my limits, the limits set upon me by my affection for Malcolm and my desire to repay him, as best I could, for what he had so constantly offered me for nearly fourteen wonderful years.

God bless you, little guy. I miss you more than I can say.

You just read issue #120 of Snakes & Ladders. You can also browse the full archives of this newsletter.