Cavaliere Wild Scull and Other Adventurers Romare Bearden, Odysseus Leaves Circe, 1977, collage of various papers with foil, paint, and graphite on fiberboard. The Museum of Fine Arts, Houston, which has a new building.

Here’s the first computer to sing, in 1961 – giving Arthur C. Clarke and Stanley Kubrick an idea that they would work creepy wonders with.

I wrote a long reflective post on impermanence in online writing, print writing, and, well, life.

Austn Kleon wants to go back to the canyon. Me too, buddy. Me too. The Suite of the Most Notable Things Seen by Cavaliere Wild Scull, and by Signore de la Hire on Their Famous Voyage from the Earth to the Moon 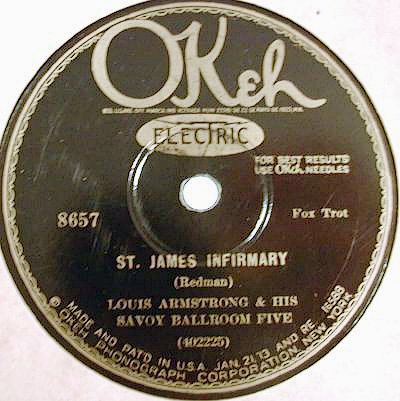 One of the greatest of American songs is “St. James Infirmary,” and it is also one of the most mysterious, with a cloudy and complicated history. Despite the credit on the record pictured above to Don Redman, no one knows who wrote the song, and its lyrics are endlessly variable. Here’s how Louis Armstrong sang it:

I went down to St. James Infirmary,
Saw my baby there,
Stretched out on a long white table,
So cold, so sweet, so fair.

Let her go, let her go, God bless her,
Wherever she may be,
She can look this wide world over,
But she’ll never find a sweet man like me.

When I die, want you to dress me, straight-lace shoes,
Box-back coat and a Stetson hat.
Put a twenty-dollar gold piece on my watch chain,
So the boys’ll know that I died standin’ pat.

He first recorded the song in 1928, and then re-recorded it in 1959. (That second link says that it’s the 1928 version, but it isn’t: it’s from Armstrong’s outstanding 1959 album Satchmo Plays King Oliver.) The funeral-march pace of the later recording fits the lyrics’ mood better, I think, that the speedier early version. And Armstrong’s vocal on that later version is one of his very finest.

Wynton Marsalis’s staggering song “The Death of Jazz,” from his 1989 album The Majesty of the Blues, is musically so close to Armstrong’s 1959 recording of “St. James Infirmary” that it’s almost a cover. Listening to the two songs back-to-back is an education in the resources of the blues tradition – and of certain folk traditions that pre-date the blues.

The Wikipedia page for “St. James Infirmary” traces its history quite effectively, following the various dim paths back to England and Ireland. I’d give a lot to know where this unsettling masterpiece of American music really came from – if such a question can be answered at all.

You just read issue #119 of Snakes & Ladders. You can also browse the full archives of this newsletter.