Autumn is just beginning to hint at us here in central Texas, but whenever it comes I find myself thinking about this passage from C. S. Lewis’s Surprised by Joy in which he describes how in childhood he received certain “glimpses” of something beyond his experience, and yet connected somehow to his experience:

The second glimpse came through Squirrel Nutkin; through it only, though I loved all the Beatrix Potter books. But the rest of them were merely entertaining; it administered the shock, it was a trouble. It troubled me with what I can only describe as the Idea of Autumn. It sounds fantastic to say that one can be enamored of a season, but that is something like what happened; and, as before, the experience was one of intense desire. And one went back to the book, not to gratify the desire (that was impossible — how can one possess Autumn?) but to reawake it. And in this experience also there was the same surprise and the same sense of incalculable importance. It was something quite different from ordinary life and even from ordinary pleasure; something, as they would now say, “in another dimension.”

The phrase “reawake” I think hints at something George Macdonald once wrote:

A genuine work of art must mean many things; the truer its art, the more things it will mean. If my drawing, on the other hand, is so far from being a work of art that it needs THIS IS A HORSE written under it, what can it matter that neither you nor your child should know what it means? It is there not so much to convey a meaning as to wake a meaning.

From the sublime to the mundane: I own a Tom Bihn backpack, and I would love to buy another one someday ... except that this one is so well made that after a decade of everyday use it looks almost new. I genuinely expect that it will be my daily bag for the rest of my life. I’m always fascinated by the thinking of people who do what they do exceptionally well, so I really enjoyed this blog post by Tom about how he designs things. It’s so weird to me to think of “iterative design” not in software terms, or writing terms, but rather as something a guy does with fabric, scissors, and a sewing machine.

I have been reading Julian Jackson’s biography of Charles de Gaulle -- it’s exceptional, so far -- and I find myself meditating on a story Jackson tells near the beginning of the book. In June of 1940, which Marshal Petain announced that France had fallen, de Gaulle started making broadcasts from London insisting that France had not been defeated and there was still hope. Quickly he became the focus of hope for the French resistance ... but nobody knew who he was. They weren’t sure what his name was or how he spelled it. One resister, an art historian named Agnès Humbert, wrote:

How bizarre it all is! Here we are, most of us on the wrong side of forty, careering along like students all fired up with passion and fervour, in the wake of a leader of whom we know absolutely nothing, of whom none of us has even seen a photograph. In the whole course of human history, has there ever been anything quite like it?

These resisters of the Nazi conquest didn’t know the first thing about de Gaulle, but he became the focus of their determination, the embodiment of their hopes. In light of this I’m inclined to reassess a famous statement of Churchill’s, which I had always thought false modesty: “It was a nation and race dwelling all around the globe that had the lion heart. I had the luck to be called upon to give the roar.” Which of course probably was false modesty; but it also may well have been a true statement. 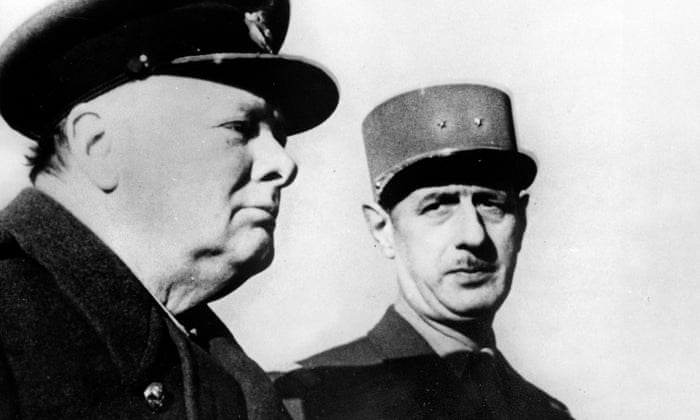 I recently watched The Cameraman, the last great Buster Keaton movie. It’s hard to believe that anyone could steal a scene from Buster, but someone could, and her name was Josephine. Here are Josephine and her co-star taking a break between shots: You just read issue #136 of Snakes & Ladders. You can also browse the full archives of this newsletter.