Frank Goldberg was born in Toronto and lived in Canada until he was 18, at which point his family moved to Los Angeles in search of a better climate for his chronically ill father. Eventually Frank would change his name to Frank Gehry and become the most famous/notorious/infamous architect in the world, but at that time he was a shy, diffident kid from a poor Jewish family, unsure of what to do with his life. He had cousins in Los Angeles, though, and one of them ran a business specializing in breakfast nooks for suburban homes. Frank was hired as an installer, a job he did very well. One couple whose breakfast nook he installed admired the precision of his work and liked his personality and so befriended him, even inviting him to Christmas dinner at their house. Their names were Roy Rogers and Dale Evans. One day, after he had known Roy and Dale for a few months, Frank joined his parents for a walk through Hollywood to indulge his father’s favorite pastime: celebrity spotting. They were walking along a sidewalk when Frank saw hands waving at him from a nearby car. Those hands belonged to Roy and Dale, who wanted to see how he was doing – and also wanted to introduce him to a friend who was in the car with them: Bob Hope. Frank’s parents were awestruck. 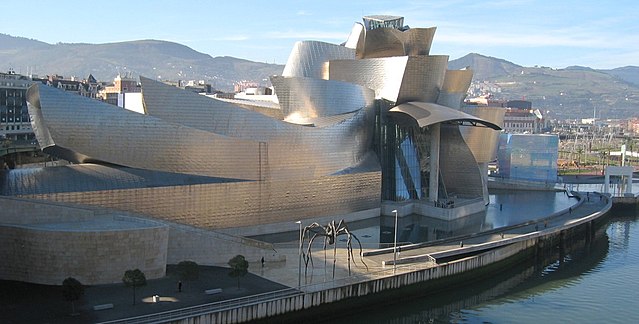 Gehry is by any measure an architect of great ambition and imagination, working often on a very large scale – see the Guggenheim Bilbao above, the most celebrated building of our time – which makes this passage from a long-ago interview so delightful:

One story that Mr. Gehry told me and which made him chuckle was that of a friend who is a chiropractor and who asked him to help her lay out her office. “I love doing that kind of stuff,” Mr. Gehry said. The friend came over and brought her floor plans and Mr. Gehry spent several hours noodling over them. “I’ve always had the fantasy of having a little kiosk in the mall where I could do that. Where people would line up and you would charge them 25 bucks and you would look at their plans. I love doing that kind of stuff. They think you are a genius when you move one little wall and get an efficiency and nobody had thought of that before. Small pleasures.”

Rome is a city of surprises – you never know what you’re going to see when you round a corner. Once, as I was trying to make my way back to my hotel, which was very far away, a little lane opened out into a small plaza and I found myself seeing, for the first time in my life, the Pantheon. It quite literally stopped me in my tracks.

On another day, I was wandering aimlessly – which is the best way to explore any city – and happened to notice a modest entry to what I thought would be a modest church. Then I walked in: I had stumbled into a very famous church, San Lorenzo in Lucina, and as I explored it I discovered that it is, among other things, the burial-place of the great French painter Nicholas Poussin.

Surprise is the great enabler of seeing. There’s a wonderful passage in Walker Percy’s essay “The Loss of the Creature” in which he talks about the enormous difficulty of seeing the Grand Canyon:

Garcia Lopez de Cárdenas discovered the Grand Canyon and was amazed at the sight. It can be imagined: One crosses miles of desert, breaks through the mesquite, and there it is at one’s feet. Later the government set the place aside as a national park, hoping to pass along to millions the experience of Cárdenas. Does not one see the same sight from the Bright Angel Lodge that Cárdenas saw? …

A man in Boston decides to spend his vacation at the Grand Canyon. He visits his travel bureau, looks at the folder, signs up for a two-week tour. He and his family take the tour, see the Grand Canyon, and return to Boston. May we say that this man has seen the Grand Canyon? Possibly he has. But it is more likely that what he has done is the one sure way not to see the canyon.

Why is it almost impossible to gaze directly at the Grand Canyon under these circumstances and see it for what it is — as one picks up a strange object from one’s back yard and gazes directly at it? It is almost impossible because the Grand Canyon, the thing as it is, has been appropriated by the symbolic complex which has already been formed in the sightseer’s mind. Seeing the canyon under approved circumstances is seeing the symbolic complex head on. The thing is no longer the thing as it confronted the Spaniard; it is rather that which has already been formulated—by picture postcard, geography book, tourist folders, and the words Grand Canyon.

The man from Boston is insulated from surprise and therefore from seeing. By contrast, I think I saw the Pantheon and San Lorenzo in Lucina because I wasn’t expecting to see them. I was in Rome as a tourist, yes, but I was tired, a little distracted – and therefore susceptible to surprise.

I’ll leave you with a painting by Poussin that I especially like, one of St. John on Patmos – and it may be that I like it so much because I was rather surprised the first time I saw it, not in Rome or anywhere else in Europe but at the Art Institute of Chicago:

You just read issue #131 of Snakes & Ladders. You can also browse the full archives of this newsletter.