A Stone Rolled from the Mind 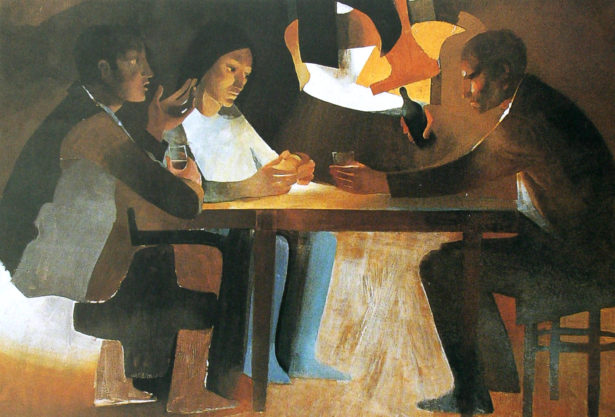 Last year I gave you Easter with Arcabas. So let’s do that again, shall we?

Laurance Wieder, from After Adam, “Eighth”:

And so, a toast:
O God, the cup
You pass to us
Is crazed, is cracked.
We drink it up.

Norman Malcolm was an American philosopher who became close friends with Ludwig Wittgenstein. In 1958, seven years after Wittgenstein’s death, Malcolm published a memoir in which he said that Wittgenstein was interested in religious matters but of course held no religious belief whatsoever. But later on, when he saw more of Wittgenstein’s journals and letters, he realized that he had been too confident, and had misinterpreted many of Wittgenstein’s statements about religion. For instance, when Wittgenstein said that he could never bring himself to believe in the Catholicism of his friend (and, later, literary executor) Elizabeth Anscombe, Malcolm assumed that he meant something like “I would never believe such nonsense.” But eventually he came to see that Wittgenstein had been making a far less critical statement, had been essentially saying that he was not formed in such a way that he could believe in what Anscombe believed – but that that incapacity might well have been some kind of flaw in his formation.

In one of his journals, later published in the book Culture and Value, Wittgenstein wrote,

What inclines even me to believe in Christ’s Resurrection? It is as though I play with the thought. — If he did not rise from the dead, then he decomposed in the grave like any other man. He is dead and decomposed. In that case he is a teacher like any other and can no longer help; and once more we are orphaned and alone. So we have to content ourselves with wisdom and speculation. We are in a sort of hell where we can do nothing but dream, roofed in, as it were, and cut off from heaven. But if I am to be REALLY saved, — what I need is certainty — not wisdom, dreams of speculation — and this certainty is faith. And faith is faith in what is needed by my heart, my soul, not my speculative intelligence. For it is my soul with its passions, as it were with its flesh and blood, that has to be saved, not my abstract mind. Perhaps we can say: Only love can believe the Resurrection. Or: It is love that believes the Resurrection. We might say: Redeeming love believes even in the Resurrection; holds fast even to the Resurrection. What combats doubt is, as it were, redemption.

Easter. The grave clothes of winter
are still here, but the sepulchre
is empty. A messenger
from the tomb tells us
how a stone has been rolled
from the mind, and a tree lightens
the darkness with its blossom.
There are travellers upon the road
who have heard music blown
from a bare bough, and a child
tells us how the accident
of last year, a machine stranded
beside the way for lack
of petrol, is crowned with flowers. You just read issue #124 of Snakes & Ladders. You can also browse the full archives of this newsletter.