This newsletter thing is really blowing up, isn’t it? I don’t mean my specific newsletter – but newsletters in general. As a lot of people have been saying for a while, there’s something soothing about receiving something in your email inbox that you can read and think about without there being several prior and next actions involved. A unit of thought, not part of a stream.

It does make me miss having a blog, and the way one could drop posts that varied from fifty words to a thousand, and you never knew which one the audience was getting. Newsletters, on the other hand, since they go directly into your inbox, seem to contain an obligation to be a little more substantial.

Anyway, I’m still halfway through my next Technical Handbook post, as I haven’t really had time to work on it since we last spoke, but a few people gave me ideas for how I could continue to make these interesting for people.

James Tynion IV announced his Substack Pro deal, that’ll see him making comics and other stuff for the platform. I’ll be working with him on OPERATION SKYLIGHT, a.k.a. Blue Book, a non-fiction(-ish) serialised comic written by James and drawn and coloured by the estimable Michael Avon Oeming. I might or might not be contributing to some of the other codenames on that page, so stay tuned. 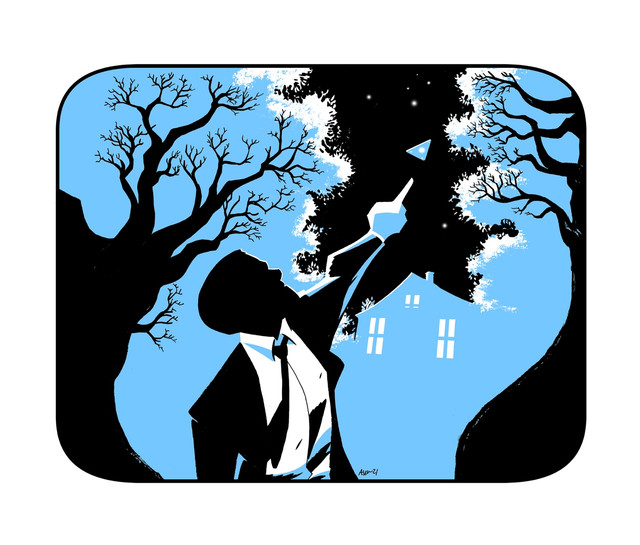 Secondly, Detective Comics #1046 will be my last issue of the book, at least for a while. It’s been a blast working with Mariko Tamaki, Dan Mora, Jordie Bellaire, and, behind the scenes, with David Wielgosz and Paul Kaminski, but with my recent burnout and subsequent recontextualisation of how work fits into my life, I realised that this is not the right time for me to be working on 15-issues-a-year books.

Five years ago, if you’d told me I’d be walking away from this high-profile a book for my health, I wouldn’t have believed you, and, you know, it might still be a stupid move, but you gotta do what works for you.

Other than that, The All-Nighter was announced, both as a digital-first comic and as an upcoming tv show, by the same team that did the Eisner-winning Afterlift. Here’s the first issue blurb:

Welcome to The All-Nighter, the only diner in town where you can get coffee and a meal from sunset to sunrise! The staff are friendly (kind of) and happy to serve you (sometimes), and it would never cross their minds to drink their customers’ blood … Alex is bored – flipping burgers for strangers all night is no way for a vampire to live. But he and his fellow vampires Joy, Cynthia, and Ian have agreed to blend into human society. Inspired by superhero movies, one of few passions in his un-life, Alex decides to don a cape and start fighting bad guys. But his decision will have bigger consequences than he realizes – for himself and for everyone he wants to protect. From CHIP ZDARSKY and JASON LOO, the Eisner-winning team behind AFTERLIFT, THE ALL-NIGHTER is a story about found family and a new twist on superheroes! 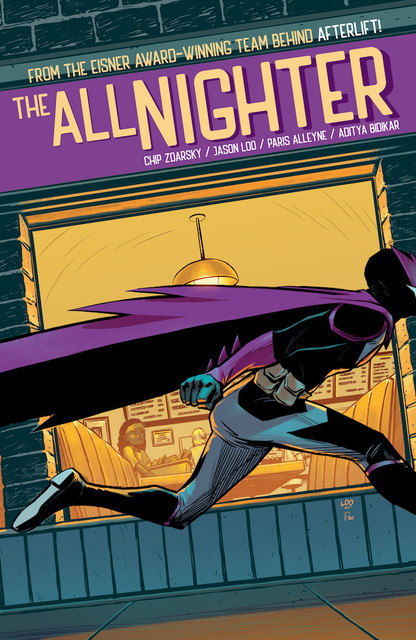 Which reminds me, the winners of this year’s Eisners were announced, and while I didn’t win, James did for Best Writer, and Anand RK/John Pearson won for Best Painter/Multimedia art.

Writing-wise, I’m not sure I mentioned it here, but I decided to take it easy on myself this year. I finished one script, and am in the middle of one more, but I’ve divested myself of any specific writing goals for the year. I need rest, and whatever enables that is a good thing (that’s also what’s been delaying this newsletter, honestly).

But I am pleased to tell you that my first comic as a writer in many years was published in Razorblades #4. My long-standing collaborator Rosh drew and coloured it, and while I can’t vouch for my writing, his art is worth the *cough* price of entry. (You see, the comic is titled “Price of Entry”, so … never mind.)

It’s a whimsical horror story set around Bollywood. Hopefully it’ll surprise and delight you. Here’s the first page as a teaser, and you can buy the magazine here. I will also be contributing a short story for Forgotten Lives II, the sequel to last year’s Doctor Who charity anthology Forgotten Lives, for which I wrote a story about the Graeme Harper incarnation of the Doctor.

This one won’t be a direct sequel to that story, and I’m still toying between two versions of what this could be – one of which would be the “last story” of that particular Doctor. We’ll see.

I’ve also been tinkering with a few pitch documents that I’m not quite sure what to do with. Any comics that come out of it would have to be written next year, but I’m excited to get some of these ideas out. Well, we’ll see. No point daydreaming too much.

The rest of this is personal updates, so if those are not interesting to you, feel free to skip and come back next time.

I’ve wanted to buy a typewriter for a very long time. At least for a decade. Back then, I was obsessed with writing machines, and how a different writing machine or context might help me write better. (I was also very into “distraction-free” writing around that time, as you might expect.) As a friend put it when we were chatting about this – “I’ll get this one machine and I’ll finally be able to write.” (If you recognise yourself in that, there there.)

As I grew older, I realised that all of that stuff was bullshit, and only excuses for not having written. Fact is, what you’re writing on has very little bearing on whether you are able to write or not. It’ll affect the manner of the writing itself, but not the fact of it. Of course, there are ways to improve your attention, but that’s the thing – the device isn’t the issue, your attention is. (And for what it’s worth, Neil Gaiman’s advice for writing works great – put yourself in an environment where it’s just you and the page, and you’re allowed to write, or do nothing, and eventually writing just becomes more interesting than doing nothing.)

And yet, I still love different writing devices – I have a dozen or so different computer keyboards, several of them mechanical (including the one I’m writing this on, the Keychron K8) – and they do affect the pleasure you get from the experience.

Different keyboards feel different – there’s a reason everyone hated those MacBook butterfly keyboards (I have one, and while I find it okay to type on, it does hurt your fingertips to type on it for too long). Writing longhand (i.e. pen-on-paper) encourages a tightness in writing, because handwriting is slower than typing on a computer, but it also lets you go down different paths without necessarily settling on one, because even if you write a few pages and cross them out, they’ll be available and readable, unlike on a computer where you’d just delete that text.

I also have a Freewrite Traveler – I meant to write a review of that one as a newsletter post, but never got around to it. It’s an interesting device. Great to type on, doesn’t let you delete large chunks of text at once, and it discourages going back, so I find it great for writing diary entries, and long ramblers for ideas that I’m trying to explore. Most of what I write on it reads like I’m talking to myself, rather than to anyone else. It’s a device meant for first drafts, and it works very well for that.

So, a couple of months ago, when I saw a typewriter on sale on a vintage website, I didn’t think, this’ll help me write, but I’ve always wondered what it feels like to write on that. Before this, I was never in a position to put down a substantial amount of money on a luxury item just to “feel what it’s like”. Except now, I’ve been stuck inside my house for a year and a half, with not much to spend my money on, so, I figured, fuck it.

I got that one, but it didn’t work properly, so I sent it back. But now I was obsessed. I did a great amount of research, found a far more reliable supplier, and finally ended up with this – the Hermes Baby: 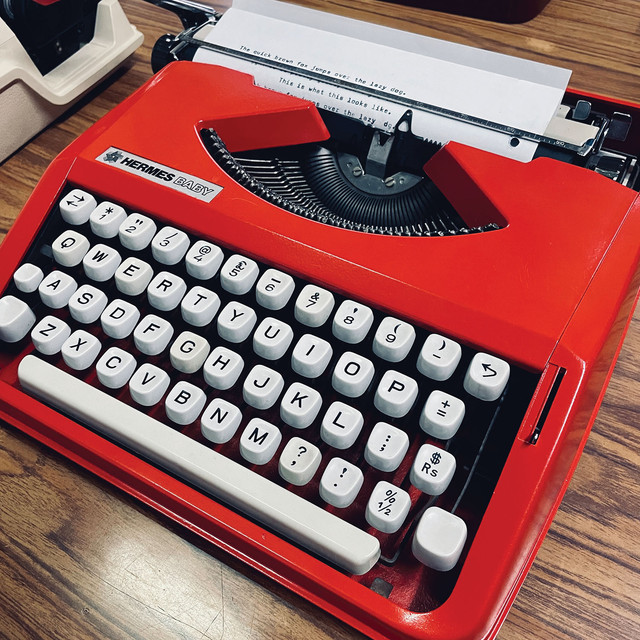 There’s a lot of history here, and it’s fascinating to see where it fits in with the overall history of typewriters. But you don’t want to hear all that unless you’re a typewriter nerd, really.

On the other hand, the typing experience. I haven’t yet written any fiction on it, but I’ve written around ten pages of general thoughts, and it’s been very interesting.

You have to think to the end of a sentence before you start – I last remember trying to think like that back when I was learning German, where there are sentences that you can only begin if you know how you’re ending them (those damn split verbs). It’s not difficult to delete a bunch of text on a typewriter, but you do get reluctant to do so, because it’s such a manual process. On the other hand, it still feels like a rough medium, more pen-and-paper than text editor. You can start without knowing when you’re going, and you can just throw a page away and rewrite it from scratch if needed.

It’s also an interesting piece of equipment for design. A very specific kind of design, of course, but, like letterpress, there is a feel to it that comes from the past, and makes the present feel a little more luxurious. For example, I’d love to receive mail with a manually typed address on the envelope. Or even a typed postcard (though the ultraportable nature of this one means I can’t stuff a postcard into the tiny roller).

In that vein, I decided to type out my favourite coffee pourover recipe to put up on the wall next to my coffee station (previously, it was handwritten on a piece of paper which by now had several coffee stains on it). It looks fun, I think: 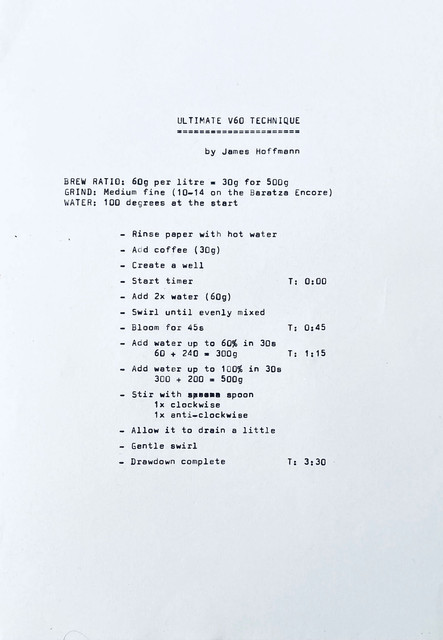 I have a story I want to write soon, based on a rather peculiar anecdote that was told to me, and I’m thinking of writing it on this. I’m agonising a bit – worrying about what words to start with, but more than that, I realise I need to nail the structure before I start writing, because of all the limitations I described here. I’m going to give it a little while before I decide whether the agonising is just preventing me from actually writing, and if it is, I’ll handwrite it like most of my short stories till date. Maybe a typed second draft? Could be interesting.

I wrote this before my cat Rumi died, and the “next issue” was going to be about how I met him. Not sure I’m gonna write about that just yet. I figured I’d send this one out since it was already written, but you’ll have a little wait before the next one, I’m afraid. Have a good week, everyone.

You just read issue #59 of Strange Animals. You can also browse the full archives of this newsletter.