Hello from the past! I am writing this on Thursday, because on Friday I will be undergoing a PRK procedure (Update: It went well!). If you’re not familiar with that (and I wasn’t until recently) it’s very similar to LASIK. Basically, a computer will reshape my eyeballs so that I can see normally.

You already know this, if you’ve ever met me, but I am close to helpless without my glasses, which I have worn since I was 8 years old. It’s strange, come to think of it, that my eyes worked just fine up to that point. Eight years of, from what I can remember, essentially pristine function. Then it all went to hell. When someone says, “he looks at the world with eyes of a child,” maybe it’s not a metaphorical statement about the person’s carefree spirit or their non-judgmental-ness. Maybe they are just saying, “He can make out street signs from a reasonable distance. He doesn’t have to squint at a clock face from five feet away.”

Yes, my vision somehow went from passable at the least to very, very bad, in a span of a year or two. I think my prescription continued to worsen until it finally bottomed out when I got to high school, but most of the damage was done in those earlier years. How does that happen so fast? I don’t believe there are any ophthalmologists reading this, but if anyone is actually a secret eye doctor and can fill me in, I’m curious to know.

Not that I’m bitter or anything. I just walk around the neighborhood searching for bare-eyed six-year-olds so I can give them my best Grandpa Simpson finger-shake. 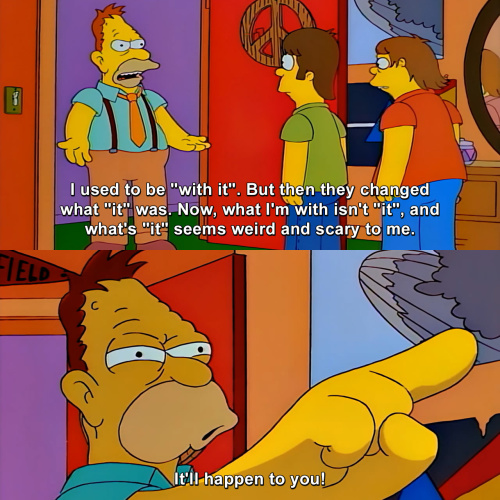 One thing I’m not that curious to know more about is the details of the procedure. I am placing my trust in the science and in the statistics, which say that PRK is extremely safe. It’s a cliche to say, “The car ride to the office is more dangerous,” but it’s true. It seems miraculous that humanity has developed the nearly-foolproof ability to smooth out misshapen corneas with computer-guided lasers. Many aspects of our “modern” medicine will seem crude 50 or 80 years from now, but I wonder if this won’t be one of them.

So I don’t want to know how it works, at least, not until afterward. I’ve always been sensitive about my eyes. Many people are, I think, but many people who need glasses frequently wear contact lenses, which involves holding one’s eyelids open in order to place a tiny piece of plastic inside of them. I tried to learn how to do that once, but the sensitivity was too much to overcome. Maybe I’d be more resilient today, being more seasoned and less anxious about new and unpleasant-seeming experiences. At the time, I found it much simpler to give up on contacts. I never disliked wearing glasses, anyway. They had even become part of my identity.

Back before I first started wearing glasses, I was already becoming a classic nerd. I was curious, I enjoyed learning, and I loved reading from the moment I learned how to do it. At the same time, I was also very outgoing and socially active. I’m not sure if getting glasses had anything to do with it, or if it was in some way a consequence or a manifestation, but by that time, at age 8, I was identifying much more with my good-at-school persona than I was with my social-butterfly persona. Maybe the glasses did change the way I saw myself, and not just the way I saw the world. (Wow, that was deep.)

So it’s strange that this era of my life will be coming to an end. It’s not that I am itching to ditch the glasses, but I can’t come up with a good reason to keep them. It’ll be nice to be able to see when I wake up in the morning, and in the shower; I won’t need to wear prescription sunglasses and prescription goggles, and have to find a place to hide my glasses when I want to swim in the ocean or play basketball. I can afford to pay for the PRK (the concept of credit also belongs on the list of miracles). And in addition to all that, maybe my self-identity could do with another update.

Why Generation Y “Yuppies” Are Unhappy

I’m sharing this article because I think it’s fundamentally true and provides a helpful lens with which to examine contentment for people my age, but it’s in need of several disclaimers first:

My friend Mike shared this great article about the trend of cultivating “digital gardens,” which are personal spaces on the web that are dedicated to pure creativity. They aren’t ordered in a certain way, like blogs, or meant to project a certain image to site visitors, like portfolios, and they aren’t supposed to feel polished, or even finished. They’re a place to experiment and have fun and express oneself.

It’s really not a new trend—my first forays into building web sites in the late ‘90s could have qualified as “gardens,” much more so than anything I’ve done more recently—but it seems to be enjoying a renaissance. One of my pages was devoted to the band Green Day, and another highlighted my performance in various ESPN fantasy sports games. They were really fun to make, and that’s where I learned most of the basic skills that eventually led me to a career in software development.

I have a website now, of course, but it’s just a listing of a few articles I’ve written, and I’d love to start turning it into more of a garden. More to come on that score.

That’s all I’ve got for now. Please take care, write back if you can, and I’ll see you next week (without glasses).

P.S. If you received this email from a friend, you can sign up here. You can also check out the archives.

You just read an issue of Aaron Wolfson's Newsletter. You can also browse the full archives of this newsletter.