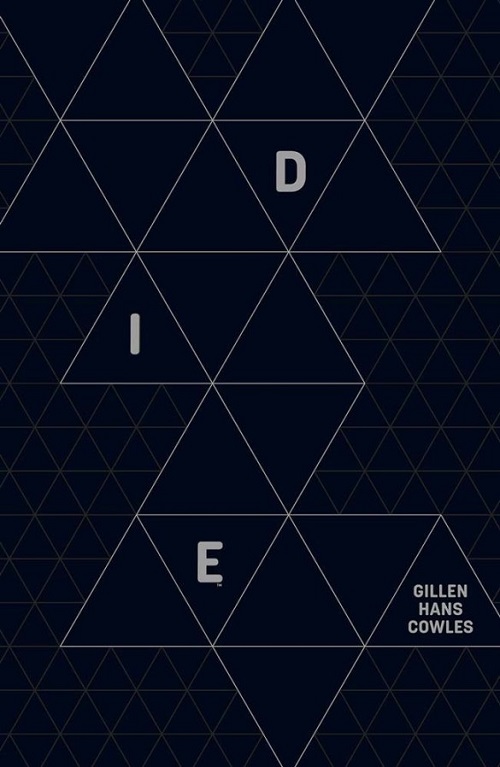 The collected single-volume hard-cover of DIE hits comic shops this week. It should be book shops next week, officially. This collects all 20 issues of Stephanie Hans, Clayton Cowles’ and my own dark fantasy story. It’s been the most personal work of the recent years, and is kind of about everything (again). I though I had that out of my system with WicDiv, but once more it comes and beats me up.

While it clearly has an appeal to anyone who loves Role-playing games, it’s about capital-F Fantasy, in the broadest sense. If you want a mid-life crisis dark fantasy book, this is for you. It’s about comparing teenage fantasies with adult realities, and examining where things have gone astray. It’s about how fantasy isn’t just escapist, but a device for people to find themselves. It’s about 650 pages (trad).

Stephanie makes it enormously beautiful. Clayton makes my scribbles comprehensible. I’m very proud of it, and this is the definitive format.

Admittedly, one I haven’t seen in the flesh – the vagaries of shipping means I haven’t got a copy yet, so you’ll all see Rian’s design work and the fancy cover treatment before I will. RRP is $60, making this an ideal Christmas present, for someone else or yourself, because you’re worth it, you really are. As always, if you want it, best to buy early, as HC rarely reprint. 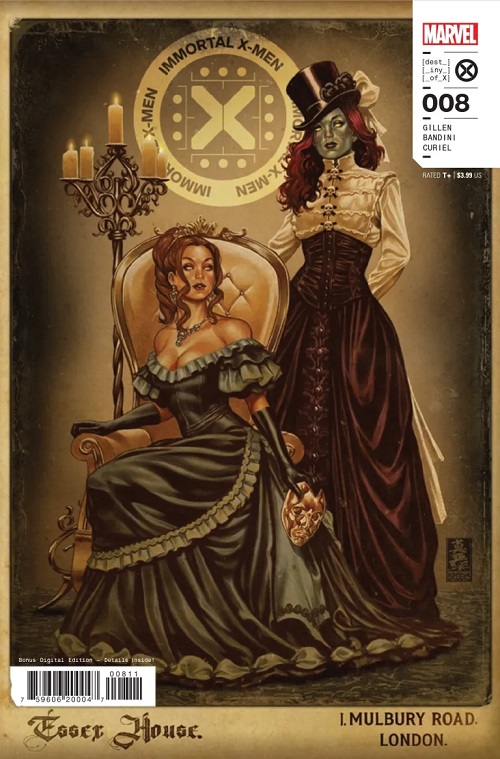 Immortal X-men emerges from Judgment Day and gets back to the whole epic personality battle between Destiny and Sinister thing. When writing this, I didn’t know exactly when it would be released around Judgment Day’s ending, so rather than picking it up directly after and risking spoiling everything, I decided to do a historical piece, taking in two important periods. I also really needed to do a historical piece, which is handy.

This has Mystique as our viewpoint character, our great detective trying to put things together and/or shoot people. Michele Bandini joins us again on guest pencils, and does some really fun stuff. I’m also having fun with the game of this – writing this after writing a brief over-view of DIE, I’m aware there’s some connective elements here, in terms of the exploration of 19th century pulp-and-science culture.

Available from all comic shops, and the preview is here. 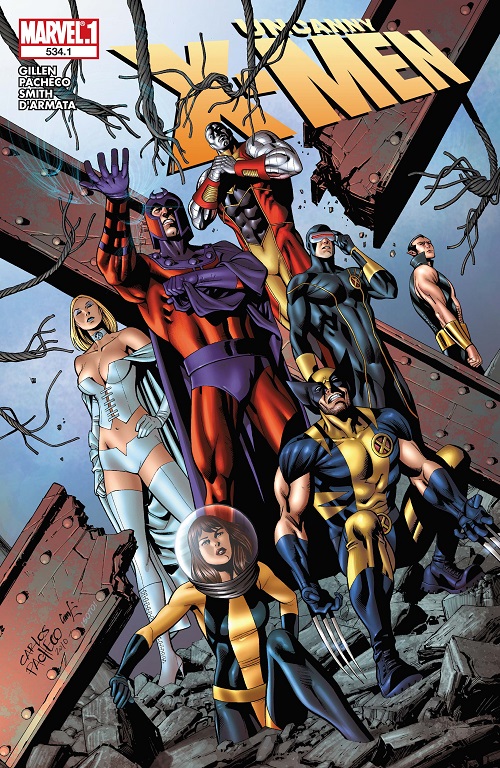 Carlos Pacheco passed just after I sent the last newsletter. Tom Brevoort’s writing on his memories is a great overview of why he was such a huge talent, as well as giving a real personal perspective.

We collaborated my Uncanny X-men run, where he brought real charisma and style to the book, as well as great Superhero comic energy. It sung best when I leaned into the chaos that made Avengers Forever such a striking book, and he also was the artist who delineated the remix of Sinister. The apex of his work was the short Two-Issue UNIT arc, which was just berserk. Sadly, I never really knew him more than to exchange e-mails while working together. I believe we nodded a quick hello at a con once, before the crowds moved us away. That’s a regret.

Gone way too soon. Love to those he loved and loved him. 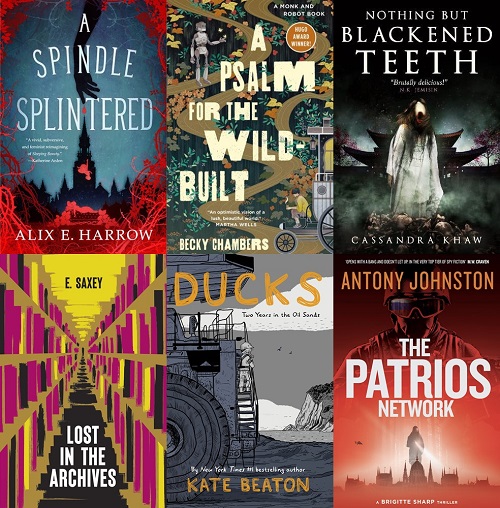 I’ve been putting this off for weeks, but as I have a little time, I’m going to rush through some recent book stuff. I jumped on two remaining novella in the Hugos categories. Spindle Splintered, by Alix E. Harrow is a portal fantasy that explores and deconstructs Sleeping Beauty – which, as the book argues, is heroine no-one really likes… except dying girls. It manages a trick of being light while having the real darkness to it, which his some fairytale magic – if you’re running a DIE game, I suspect you can get some inspiration from this in how a character’s obsessions can be turned into an adventure.

A Psalm for the Wild-Built by Becky Chambers was the Hugo winner, and is a gentle Solarpunk story of low stakes, fascinating worldbuilding and a journey – a monk decides to become a something I’ll paraphrase as a Barista-cum-Therapist, gets really good at it, gets depressed, and then goes on a personal pilgrimage, where they meet a robot. It’s clearly quality stuff, and I can see why its charms won. However… okay, , this is not something I’d normally say about a book, as this isn’t strictly speaking a review. However, as it is the Hugo winner and so hugely beloved by many of my friends, I think I can show more reservations than usual In short: I can’t think of a recent lead character who I’ve had more of an instant dislike than this. So virulent was my eye-roll that it immediately led to a whole bunch of soul-searching. because that kind of powerful response is always more about you than the book. Something bugged me, and that’s worth chewing over – I suspect it’s mainly that my own dissatisfactions would never allow myself the series of self-indulgences that the lead allows themselves, but I’m still thinking about it, which is to the book’s credit. As this was my first Chambers, I want to go and read some more. Also the implicit structural joke of “Character wants to be in a coffee-shop AU and then finds the reality too fucking boring” is extremely funny.

Also on the Novella tip, I read Nothing But Blackened Teeth by Cassandra Khaw, a simple but pointed ghost story with a poet’s gift for a sentence, an eye for the horror, and some canine-sharp character portraits. That’s perhaps what’s most interesting about the book – it is deeply interested in character and personal history and fundamentally uninterested in dramatic scenes that actually demonstrate those characters in the present narrative. The whole story feels like a primal scream of a toxic friend group reaching an inevitable climax - the knives are out before the knives are out. And, as said, Cassandra can really turn a sentence.

I also read E Saxey’s Lost In The Archives, their collection of short stories, which I was absolutely charmed by. A mixture of fantasy, social-sci-fi with a tinge of the weird, the best of these do the trick of summoning a world woith ideas that are just bigger than the frame, while not overcomplicating the purity required for a short story to hit. I really enjoyed this, and am looking forward to their debut novel Unquiet that’s out next year. It’s a period for Short Stories – i’m presently on Alan Moore’s illuminations.

On the comic front, I consumed Kate Beaton’s Ducks, which is a major work by a major creator. Her wit and intelligence is in play here, but rather than the comedy you know her for, it’s applied with striking nuance on some incredibly difficult topics. It’s about capitalism, misogyny, exploitation, complicity and how people’s very nature is altered by context, and if it’s not in the Eisners next year, I’ll be painting extra eyebrows on my face to raise. Expertly titled too.

Oh – not read in this period (I was a beta reader), but released, is Antony Johnston’s Patrois Network, a further of his Brigette Sharpe thrillers, which I think may be the best of the series – high stakes infiltration, with just enough convincing tech grit to the technothriller aspects to convince. I’m now imagining some awful PUA universe where people only get Beta Readers as Alpha Readers weren’t available.

Thanks to everyone who reached out to me about the ADHD essay. It meant a lot. I hope to be able to get back to you soon, but beg your forgiveness if I can’t. There’s probably a reason why I procrastinate on tasks, but I have no idea what it is. 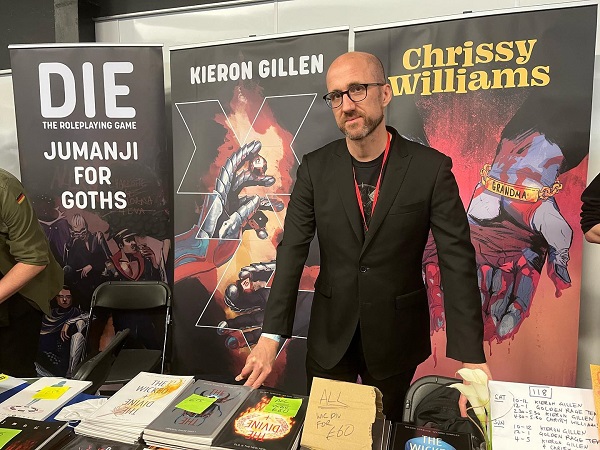 This week was defined by Thought Bubble, my first major con since the whole covid thing, and my first con with Iris and C’s first con post-Golden Rage (i.e. as a guest). As such, a lot of things changed. C and I split the evenings and signing times, with Sophie Golden Rage looking after Iris for a slot to allow us to do one together. I walked the con with Iris. I’ll say this: if you want to feel popular, walking a con with a baby strapped to your chest is a great way to do it. It’s all HEY! GOOD TO SEE YOU, YOU CUTIE! energy.

The con was good, full stop. I think there’s broadly two sorts of creators – those who actively like cons and those who view them as a necessary evil. I’m in the former. I don’t want to be on a table as much as I used to, but the basic low-stage meaningful human content is healing and powerful for me. Whenever I’m feeling cynical about comics, a con will remind me of I find loveable in the form, and why I’m actually doing it. I almost always walk away from a con with an idea or twenty – on the way back I started making notes on something which I fear may end up being another Image book.

In short: great to see you, and your lovely faces.

The social whirl around the con was also a delight. Fine meals, meaningful bar chats and a flirtation with a dancefloor. That said, I have retired from the DJ, and become a kind of toilet tour guide, spending most of my time leading people to the infamous Majestic Toilet. As demonstrated by this one by Liana Kangas.

Some quick relevant links! I was staying in this hotel and Hamish’ startling documentary footage gives an an accurate picture of what it was like to stay here. If you want a glimpse of where my head’s at, Englishman in SDCC grabbed me for a quick con floor chat. I have yet to watch, so I have no idea how delirious I was. I was certainly a bit loopy in the X-men panel with Si, Al and El Sandifer moderating. Bleeding Cool writes it up, which is I suspect loses the fact this is just us trying to avoid telling anything about the crossover before it lands, while also making jokes. It was nice to do a panel which was, primarily, about the people in the room, and that shared human experience. Still – there’s some concept art in there, which gives you a taste of what we have planned.

Work wise, I finished blocking out the OGN, working out what I think is a comfortable length for the whole thing. I now talk to the artist and work out if I want to tighten it, to bring it to a slightly smaller page count, or expand it, to give some stuff more room to breathe. This blocking out actually makes me pretty optimistic – it’s a good length to go either way, and still work. Also, the basic breakdown seems solid enough that I would feel comfortable just starting writing it ASAP.

Will I do that next, or go onto the Omega issue of Sins of Sinister? Find out next time, True Believer, etc.

You just read issue #239 of Kieron Gillen's Wordmail. You can also browse the full archives of this newsletter.