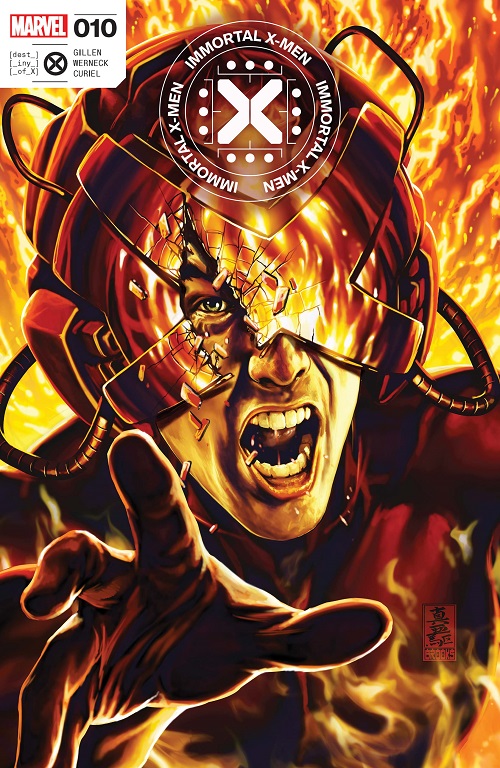 First comic of the year is the end of my first year on Immortal X-men, before we dive directly into Sins of Sinister next week. I’d say read this one quickly, as I’m sure it will be spoiled quickly, by readers or Marvel’s Marketing. Comics!

That said, if it’s spoiled, it’ll be fine. There’s a lot here other than the reveals. There are issues where I want to say – and suspect I have - “I think this one is very good or very bad”. If you unpack my insecurity, that’s just me not wanting to take the egotistical stance of saying what I actually think about it – as in, it’s exactly the work I want to be doing. It also includes an awareness that as these are always issues where I go for a strong stance on something, people may just react equally strongly against it.

Good or bad, this is exactly what I wanted to do with the book. It’s the Xavier PoV issue, and I’ve had most of the monologue (and a lot more) lying around my hard-drive from before issue 1 dropped.

In some ways it’s a shame that the supply chain production delays pushed this into 2023. It was written to be the final issue in the calendar year, with Sins of Sinister starting in the week between Christmas and New Year. Ending a year by showing the final pieces of what we constructed just feels right, right? Alas, the world is against us, and my love of ritual, performance and calendar structure is foiled.

Anyway – hope you like it, and see you next week for Sins of Sinister.

Here’s something I found when clearing out the office. 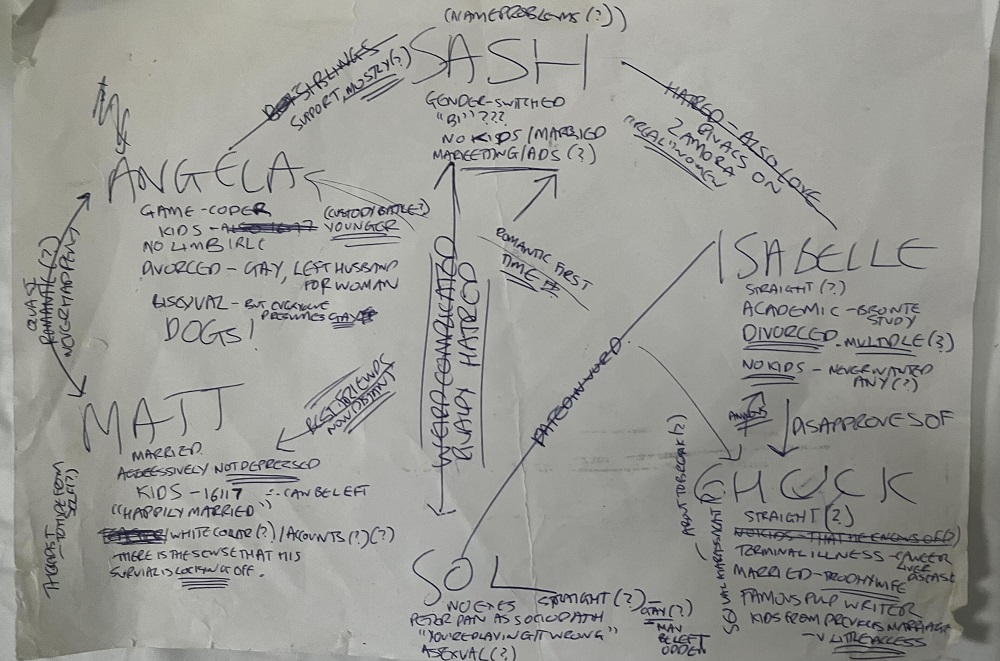 It’s part of my development process in DIE, with me working on a relationship map of the six characters. When people ask me who my fave characters are and I talk about how characters don’t exist out of context, it’s this sort of thing I’m thinking about – though I think this is the first time I explicitly did something this formal as part of my planning.

To stress, this is my first note scribles. As you’ll see, there’s lots of angles in the text which I didn’t pursue, or tweaked in different directions. Matt/Angela’s friendship could have been more quasi-romantic. Isabel’s more general bigotry as a teenager had a much stronger TERF-y notes. There’s a lot of things with (?) after where I’m clearly throwing ideas on the page to see how they feel, especially around sexuality.

Anyway – this stuff is just useful to do, and really powerful. I need to do it for new projects, because the second it starts being a group, they start telling stories.

Give it a shot if you’re a writer. You’ll see which characters are extraneous to your story pretty quickly.

I ran this last time, but I cut off the footnote joke at the bottom. Here’s the whole of my PC Gamer Staff Writer application....

… and I realise it may be useful to give some annotations to this thing, because when I re-read it, I saw pretty clearly that 22 year old me knew what he was trying to do, and it may be useful.

Overall style note: I’m writing in a personal style, but also showing I can be someone who would fit in at PC Gamer. It’s a little nasal – that opening “Whilst!”, right? The excess clauses, baroque sentences and overwriting were certainly what I did back then – but PCG did too. It’s funny, or at least trying to be funny – once more, PCG. It realises the job is being a writer, and I’m going to take every opportunity to do that.

First paragraph: I am showing I actually read the magazine, know the magazine and have read it in detail enough to know I’m going against the express advice of the editor who wrote the a feature explaining how to get a job in the industry. Not doing what you’re told by the person you’re applying to is always a bad idea. However, my handwriting is apocalyptically bad, and my spelling is worse. I had a choice between two bad options, and made one, and apologised for it.

Second paragraph is, yet again, showing I know the magazine, but also that I know PC Games. It also includes a little sucking up to James – he wrote the Grim Fandango review, which was just published. I had no idea if it was good or not. It’s worth noting what I don’t say here – I am absolutely new to the PC at this point. I know games, but I don’t know PC outside of what Edge magazine covered. I actually spend the first year on PCG catching up hard. But I fake it pretty well, right?

Third paragraph… well, I’m amused to see the “So…” opening gambit to a paragraph still being part of my style twenty five years back. This one requires you to scrape away a lot of stuff that clearly should be cut, but it’s me hitting the basic facts about my experience from the PC. It’s the doing the job part of a covering letter. It’s also the last bit of whimsy, before I’m going to do a hard tonal change. I play cute, and then…

Fourth paragraph is where I go for it. There’s some sucking up and showing I know the mag to leaven it with a degree of practicality, but this is idealism and saying things exactly how I see it. I wonder if I’m faking it to some degree too? At this point, I really wanted to be a music journalist, as games journalism was something I’d already done. However, it’s certainly what I believed after I’d been on staff for a year. I read this and feel a little like I was writing myself into existence. Still – so far, there’s mainly been style, and knowledge. This paragraph is about ideas, and showing I can think. I’m a writer, goddamnit. I have things to say and I’m egotistical to believe they’re worth listening to.

The fifth paragraph is a shameful lift from Games Journalism Legend J. Nash.

Now, I have no idea what James made of any of the above. He could have just skimmed it and thrown it away. He could have hated it. I remember him saying my actual review attached was by far the best one anyone had sent in, which is likely all that matters. Knowing the job and being good at the job will take you a long way. In a couple of years I was Features Ed, and I took on the responsibility of going through the hundreds of applicants who wrote in when they advertised. Most reviews were thrown away after I read the opening sentence, as it was clear they didn’t have what it took. Maybe 5% tops were people who one could work with and develop. In my whole 5-year at PCG career, only two people crossed my desk who were good enough to be hired instantly.

So maybe the letter was actually a problem, and reduced the chance I got an interview – I know when I hit my first major assessment after a year or so, I was told “Kieron – you do know you’re not writing for the NME, right?” - but I suspect it was fine. At the least, you want to meet the weirdo, and when it’s a place where they’re explicitly hiring weirdos, that’s probably a plus.

Legend says I turned up with my long hair, in a green suit and a Slayer T-shirt.

I don’t believe this can be true, just because I didn’t own a Slayer T-shirt. Maybe it was a Maiden one?

I’ve had some requests for the review, which I’ll see if it’s on my hard-drive.

It’s been a slow start to the year because I took a week off to visit the inlaws for a late Christmas, which was fun. I’ve handed in my first script of the year Yesterday – Immortal X-men 12, the Colossus PoV. It’s led to me starting to read Dostoevsky for the first time in ages, which is a definite win. The second I finish this, I’ll be back to pulling together a better synopsis for everything I’m writing through Fall of X, and will be chatting about it with Jordan later. I also have a bunch of fun meetings on the card, which I clearly can’t talk about, but I can definitely be the sort of shithead who writes teasy sentences like that.

I also got a new PC! Consructed by Bethany Black – who custom-builds PCs alongside her comedy (She’s too busy for the next few months to take on more work, but she’s touring in April and May. Go see her, she’s great.) The PC is a beautiful beast. I’m still amazed my old one lasted a clear decade. I’m still in the process of moving in properly – with the amount of files I’ve accumulated, it’s something of a battle, especially as my old-PC’s USB ports are unreliable. I’ve turned to Dropbox, which is working great. Bless it.

Oh, I’m being so very boring. I’m going to stop now before I start talking about how I like to arrange my folders. Plus I need to see if I can locate my FTP details so I can upload everything for this newsletter.

You just read issue #244 of Kieron Gillen's Wordmail. You can also browse the full archives of this newsletter.