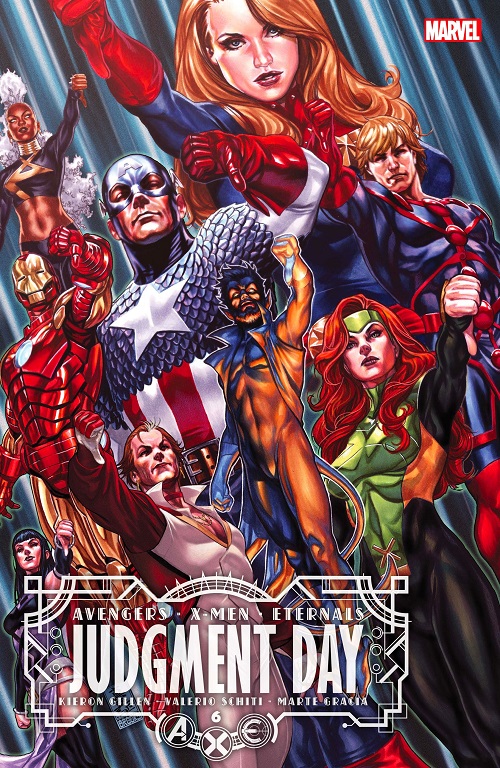 And we end Judgment Day, with an over-sized issue. Valerio wraps up the story, and then we’re joined by Ivan Fiorelli for the epilogue. There’s the Omega issue in a couple of week’s time, but that’s mainly exploring where this issue leaves the Eternals. This is The End.

We end an ending, which is how I like to do it. I hope folks like it.

I think I do. I’m happy with what we achieved, both as a team (Valerio and Marte managed to do some almost impossibly difficult things with style, grace and humanity) as a larger collective (there’s a selection of different sorts of tie-ins, and there’s some amazing stuff in there) and as a (er) me (I wanted to do an event which centred the the existential condition of the Marvel universe – both in the heroes and the world itself – and we did it.) It’s very me, whatever that means.

I suspect I’ll be doing some afterplay interviews (and AIPT are doing a open call for questions for my interview) but I suspect I won’t really know what I think of it all until I’ve got some perspective on it all, and had a chance to look back. For what I was planning to be a relatively quiet year in comics, doing something this scale kind of crept up on me, which is both disturbing and seemingly impossible, much like Rheaka Centaurus being a stealth-killer.

There’s a preview here and you can buy it anywhere. 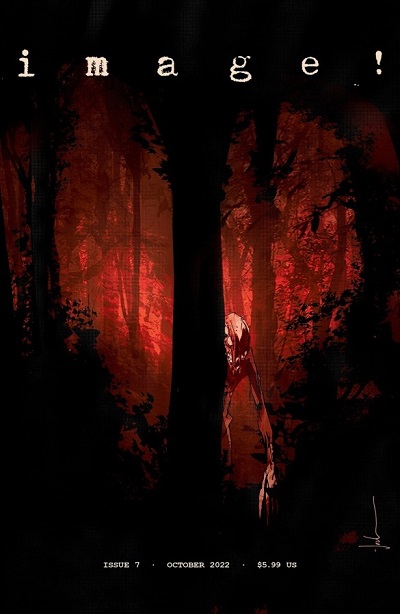 But it’s not all huge Events this week. Steve Lieber, Tamra Bonvillain and Clayton get together to do a story for IMAGE! The 30th Image Anniversary anthology. Our story is called Closer, and consists of three eight page episodes across issues 7 to 10. Much like Judgment Day, it is very me. In fact, now I think about it, it’s a lot like Judgment Day in other ways too. It’s got a lot of Singles-Club-era energy, some apocalypse romance tweaks, a conspiracy vibe and probably a pun. I’m really happy to be part of this, for many reasons – finally doing something with Steve is great, it’s always wonderful to work with Tamra and Clayton but perhaps most of all, I feel weird any year that I don’t release something new via Image. This may be short, but it still counts.

Details of the whole anthology is here. 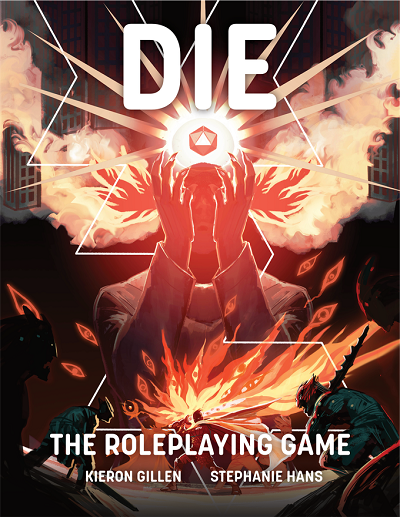 The DIE RPG PDF has been released to backers. We’ll be folding in any immediate typo fixes (report ‘em on the Discord) into the PDF we’ll be sending off to the Printer’s next week (and getting a tweaked PDF back in folk’s hands – there’s certainly a bunch of small but meaningful tweaks to be made). I believe fulfilment is aiming at February, depending on all the things that can go wrong with shipping and distribution.

The final PDF is over 400 pages of stuff I’m immensely proud of. I think everyone has done astounding things, and this is absolutely what I’d hoped it would be. There’s a tight core game, and a whole bunch of weirdness, and some stuff that I think will be useful and interesting to anyone who likes to think about the nature of Fantasy (the Bestiary jumps to mind). Can’t wait to see what folks do with it.

And you can still pre-order here.. I’m told that RRD will be charging the orders every day or so for a week or so, to make sure if anyone orders the PDF now they’ll get it sharpish. So if you order it now, it’ll be in your hands as quickly as possible.

You may have seen there was a zine-y datapage in Immortal X-men #7, which I did on my lonesome. Here’s the original. 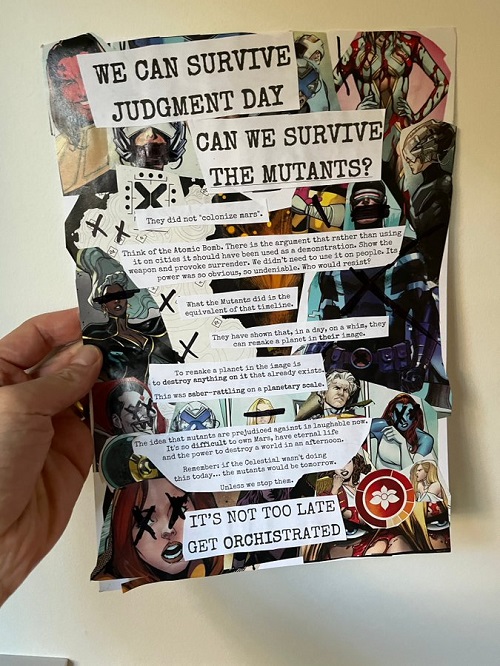 As a friend pointed out, Kirby worked with collage too, so I’m clearly in the Mighty Marvel Tradition.

Next up: get an actual drawing into Immortal. Hmm.

Okay, between the Judgment Day #6 response and the DIE PDF chat in the Discord, my brain is being kicked in all kinds of directions, so I don’t think I can focus sufficiently to write anything too meaningful. My apologies. I feel my brain very clearly fizz and pop.

Work has been steady and filled the space. I’ll have handed in the remainder of the Immoral X-men by Friday, unless something goes terribly amiss. I am particularly pleased with the title I’ve given issue 1, which I’ll see if it gets to print. All the Immoral issues are fun in an absolutely horrific kind of way. It is my idiom, or at least part of it.

After I wrap this up, I have to give Immortal X-men #9 a final look, perhaps do the needed heaviest work on the DIE PDF (it’s generally a pass for typos, but there’s some fairly significant tweaks I’ve got to make to the advancement paths – it’s only half an hour for me and the designer, I suspect, that when you have no time, half an hour is impossible). And then I’m double booked for a Zoom meeting at 6, so I’ll be in one, and then going to the other afterwards, so I’ll be missing tonight’s In The Night Garden.

(I’ve reached the point – around episode 33 or so – where Jacobi has changed how he reads the last line, presumably as someone at the BBC realised that final It’s Time To Go sounds less like Night Everyone! and more like Logan’s Run for pre-schoolers.)

And I’ve just deleted some big news as I realise I haven’t the brain to write about it today. Gahk! Sorry. I’ll definitely download next time, probably. I would give it in a sentence, but it’s the sort of thing if I just write the topline just-the-facts, folks will be mailing me with questions, so I should write about it at length, properly, so that folks can have everything they’d want to know.

Plus it’s also something I’ve been wanting to write about forever, so should carve space to do it properly rather than just dropping the punchline?

Oh, man. The more I write and the more uselessly enigmatic this is appearing. Honestly, don’t worry, it’s not a BIG big deal, but it is something I can have a good ol’ ramble about.

Let me distract you with a photo of the other big news: that I have new glasses. 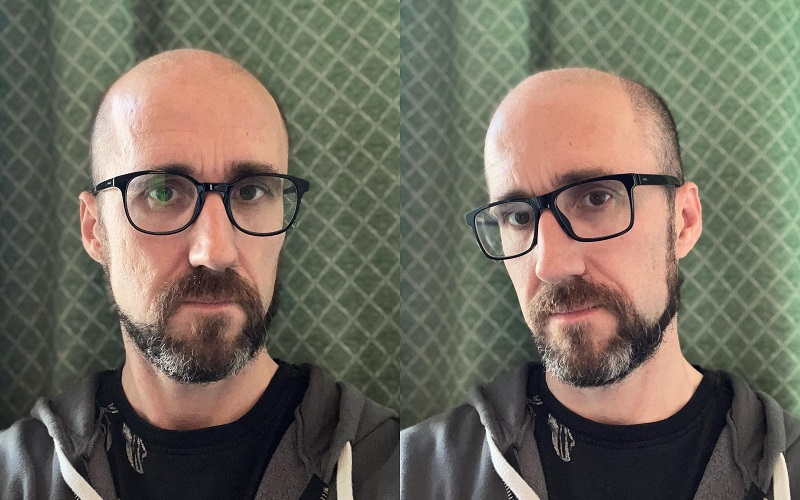 You just read issue #237 of Kieron Gillen's Wordmail. You can also browse the full archives of this newsletter.