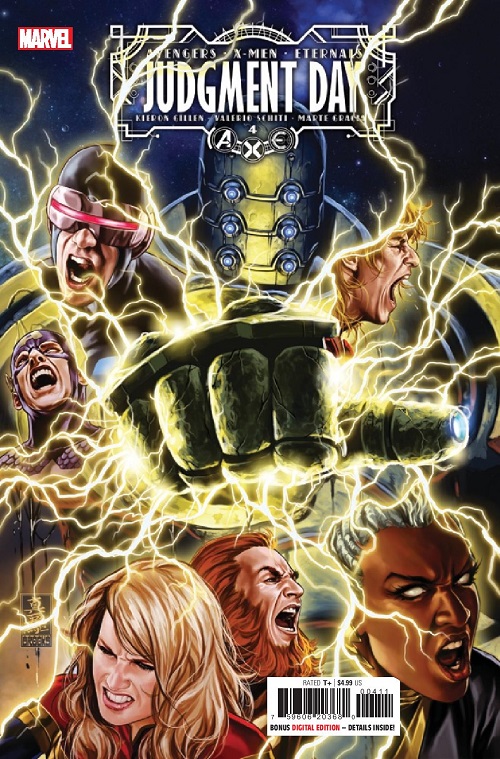 Key thing up front: if you’re reading X-med Red, read it before today’s issue of Judgment Day. I repeat, X-men Red #6 before AXE: Judgment Day #4. Well, I didn’t repeat. I changed the words completely. You know what I mean.

AXE: Judgment Day #4 is out, which is rest of the second act, before careening into the third. Which is a LOT. And this issue is also a lot. Of all the issues, this is the one which I’ll be most interested in the reaction to. All the issues are dense, but this is the densest, and the one where Marvel gave me a couple of extra pages to help with it. There’s certainly some things I’d have loved to have given more space to. On the other hand, it really does have a lot of stuff in it, and there’s panels which could have been whole issues. It hits you over and over again, and it’s really one you can pore over.

(It’s also the one which is most Eternals and X-men-y, though that may depend on how you feel about Eros’ dual-class.)

Hope you like it. Valerio and Marte are doing amazing things, Clayton is making my nonsense sing and we’re back next week with issue 5, which I think is my favourite of the series – though I have yet to go through a completed 6. We’ll see. Issue 5 is very me, for better or worse. 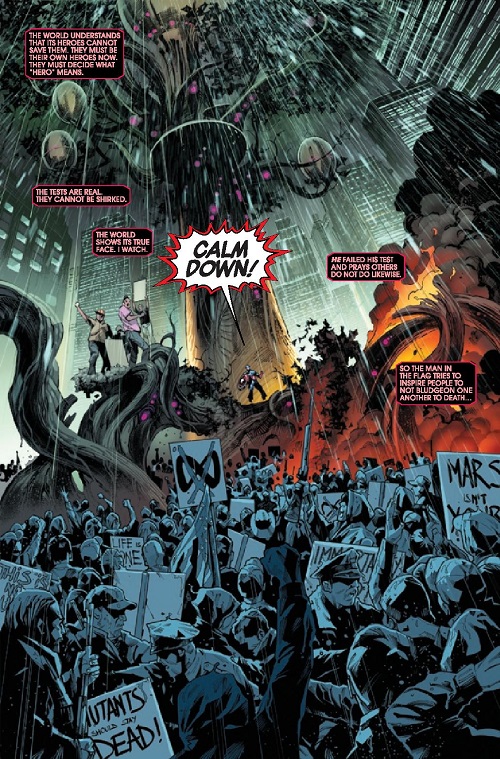 See you next week for issue 5. 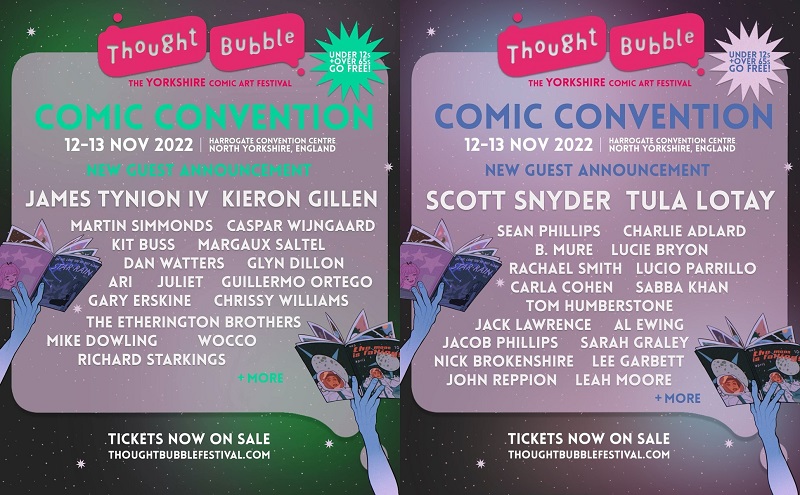 Yes, I’m in there. And Chrissy is too. This is my first major con since the plague years begin, and I’m looking forward to it enormously. See folks there. 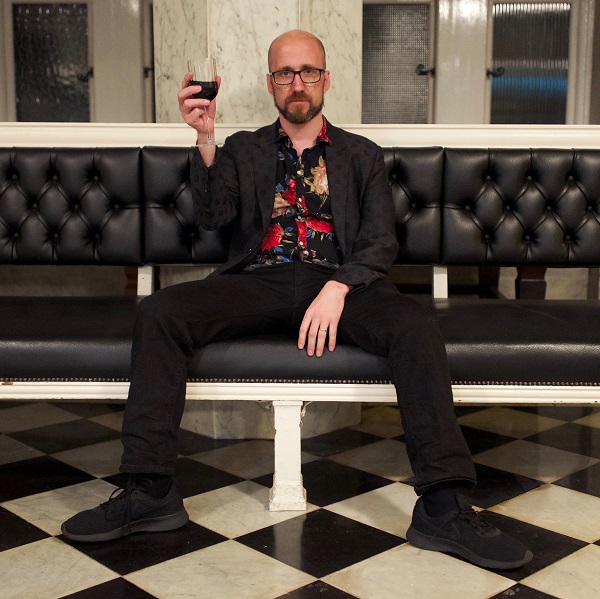 I think this photo was taken the last time I was at Thought Bubble, around 3am, post-party. I’m in the famously fancy toilets at the con hotel and Gerry Duggan is behind the lens. I love it, and use it as a press shot when people are in the mood for something a little more glam and salacious than usual

Gerry is presently kickstartering a high-quality book of his portrait photography and it looks like it’s going to be a truly beautiful book. He’s got an amazing eye.

I was out the country for the Queen’s death. We were visiting C’s family near Turin, and hard whilst up in the alps where we promptly fell through a portal into Hyrule. 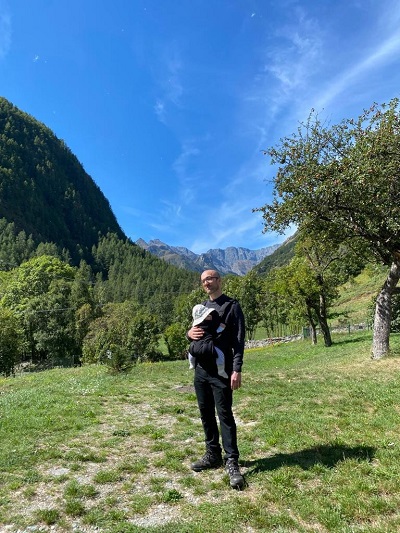 Don’t worry, we made it back fine.

(I’ll say this: traipsing up and down trails with your child strapped to you is some real Lone Wolf & Cub casual cosplay stuff.)

I’ve nothing to say about the Queen, at least now. I have precious few minutes to write, and I don’t want to waste them. I was a little regretful to be out the country. I was out the country for Diana too, and I’d have liked to be here to see the initial wave of a country’s brain melting. But still – joining four days in, when the nerves are showing is also interesting.

My head has been inching back into Comics, in a active rather than passive way. I know this may feel weird when I’m in the middle of a Marvel Event, but Work For Hire – for me – is primarily reactive. I don’t pitch things. People come to me, offer a gig – as in, a problem – and I solve it. In the last year and change, that’s what I’ve had the brain for. But it’s not the same as making active moves in the world. In the language of RPGs that is filling my head right now, that’s playing in a game, not running one.

Listening to Off-Panel weekly is definitely a part of it - and a quick plug for the Wes Craig episode, where he’s talking about his forthcoming Image book KAYA which is just on pre-order cut-off. On Off-Panel, I’m hearing peers and friends lay out where they see the world, and it feels a little like I did when I was running Decompressed back in 2013 or so – as in, listening to people talk as a prompt for my thoughts. I can orientate myself, and choose a direction.

Here’s something fun – Matt Rosenberg has just announced he and a bunch of ludicrously talented artists are doing the Ashcan Press Comics Corporation which is their take on a Substack model. Joshua Williamson has also launched his, circling more Nailbiter. What Ashcan Press is promising is a comic a month, which is the sort of simplicity that really appeals. You pay this and you get this.

It’s close to the model I was chewing over. Button-down does the same pay-for stuff that Substack does, so I could do it here… but the specifics are just not what I want to do. Substack (and Buttondown) allow you to basically charge a monthly fee for a paid sub-list of your free list. I’m not interested in tying myself to that – the point of online, for me, is the flexibility and as much as people seem to be fine with non-comics deep-process posts, it’s not what I want to do either. Patreon lets you do something closer to what I’d like to do, but it’s fine details mean it’s just not right – plus starting a readership for scratch in a whole new service is a lot of work, right? I’ve got a list with you all on already.

What I want is just simple: sign up, and you’re charged every time I send a newsletter, and that newsletter includes a self-contained comic. No more than once a month. If you’re on the list? We just send you a new digital comic when it’s done. I want the surprise, not the regularity. I want to be able to just drop something… and also know exactly how much money it will make so the artist can plan for it. Afterwards we’d put it somewhere so it’s still available – something Panel-Syndicate-y, or maybe just get it on Comixology. Down the line, when enough one-shots are done, put them in a trade.

(The other option is to just do one-offs through Image. That also has a certain appeal. Steve, Tamra, Clayton and I are just finishing off the three-part story for the Image Anthology, and that feels like a one-shot in the making, a micro-trade.)

This is close to in some ways to what many my of my peers are thinking of, but different in some key ways – despite the direct connection, this isn’t community building. This isn’t a service. This is just doing art for art’s sake for an audience of people who want to have a surprise turn up in their inbox now and then.

That the infrastructure to do what I want doesn’t appear to exist anywhere is a major problem, because I clearly am too lazy to work out how to do it myself, and that it doesn’t exist means that it’s likely that there’s something I’m missing that makes it impossible.

(That said, it may just be “Corporations like selling people ongoing subscriptions”)

That’s where my head’s at today. But, as I said, there’s a lot of processing going on right now. You ask me tomorrow, and I may be thinking “Actually, I’m done with comics, I’ll do prose.” By Friday, I’ll have circled back around to just going full time with Iris. We’ll see.

This has gone on much longer than I thought. I wanted to do some writing about the TV I’m watching (Barry, the incesty dragon show, the elfy ring show, Russian Doll, Paper Girls), the films (a rewatch of 24 Hour Party People), the games I’m playing (Trophy Gold) and the two novellas I read (A Psalm for the Wild-Built and A Spindle Splintered). Hopefully next time.

In other notes, my attempts to teach Iris to count via a spirited rendition of This Monkey’s Gone To Heaven are progressing poorly.

You just read issue #232 of Kieron Gillen's Wordmail. You can also browse the full archives of this newsletter.