229: no matter how much pritt stick and scissors you apply 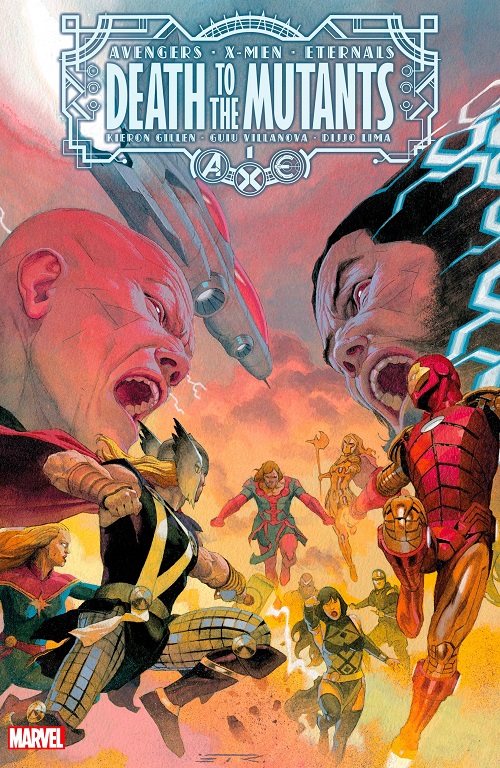 The Event that walks on (er) no legs marches on. From me and Guiu Vilanova. there’s Death to the Mutants #1 (aka Eternals #14 aka Eternals #17 if you’re inserting the specials), which catches up our heroic Eternals with all things AXE-y. You’ll see in the preview below that I’m really continuing my whole “you really can just read this if you’re not reading AXE” approach, while also clearly adding a lot of light and shade to the events of Judgment Day #2. Well, that’s the plan, anyway. You tell me. Writing the heroic Eternals trying to navigate this is a lot of fun, and Guiu really brings a humanity to every panel. There’s one beat where Ikaris has an actual thought which is a special joy.

However, I’m informed via Tom’s newsletter that these were the final pages coloured by Dijjo Lima before he died, which is enormously sad. There’s apparently a tribute in these pages too. 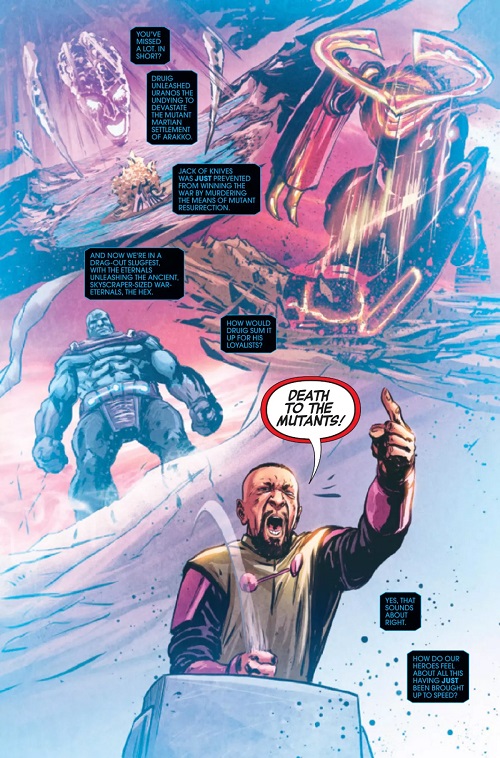 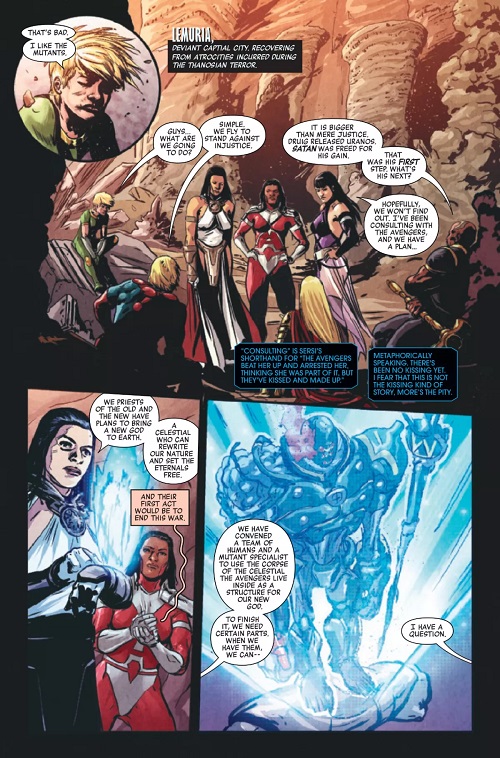 ….and you can see the rest here

In terms of other tie-ins this week, I’ll make a special mention of X-men 13, which covers exactly the same period as Death to the Mutants, with the ball passing between them at various points. If you’re wondering, there really is no correct reading over between them.

However, prompted by a joke on twitter of reading one page of each back and forth, I thought I’d do a Chronological Megamix for those who want to read it as one big comic. Page numbers are only include comic/data page numbers. These are assuming both issues are 20 pages + 2 data pages, and title pages don’t count as data pages.

Don’t do this for your first reading, as it’ll read terribly, even if I have done the math correctly. They’re not one comic. They’re two comics, no matter how much pritt stick and scissors you apply. 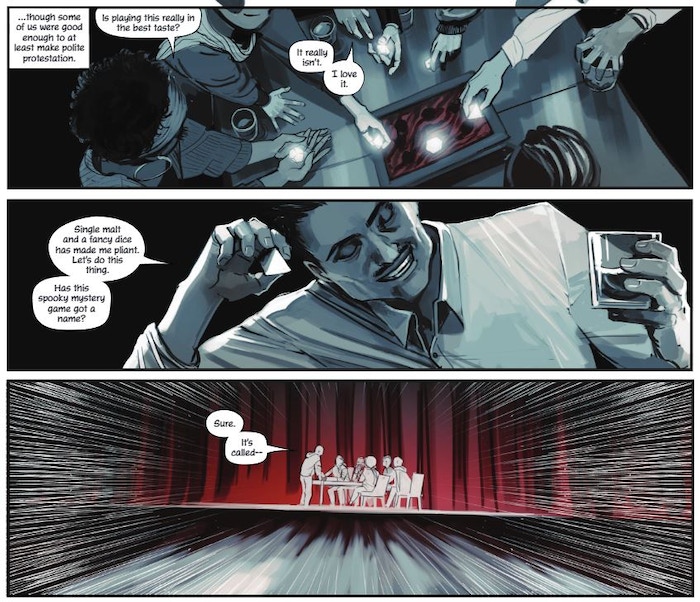 Grant’s just posted the August update for the DIE RPG.

Some key distilled things for those who hate clicking… * The intro comic is done! He shared a few panels, which I put at the top of this section. 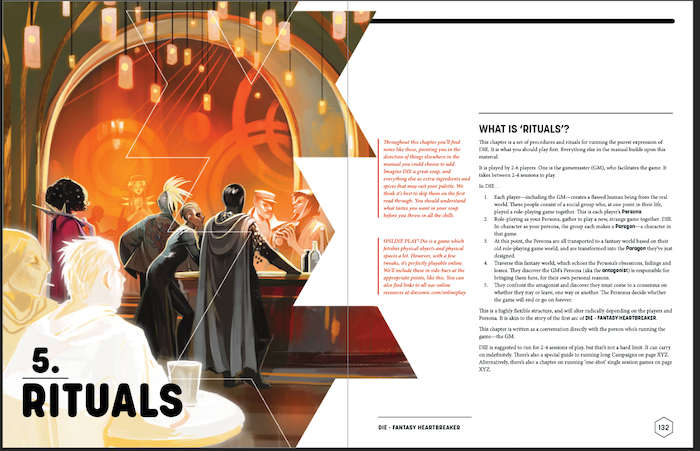 Here’s a splash of process I thought I’d share. When writing a comic, you write the script. Then when you get the final pages, you do a lettering draft of the script, seeing if you want to change things now you see the art. Then it’s passed to the Letterer. After that, they lob you a PDF and you do another pass – which is primarily proofing, and ensuring readability and similar things. Normally big cuts are done earlier, but there’s usually a few extra tweaks.

Anyway – this is how this panel ended up in AXE 2.

This is how it was at the proofing stage…

Why did I cut it? They’re both long lines, so you wouldn’t think it’s for space… but the line in the published version was actualy in the next panel originally, addition to what remained in there… which means if I lose the Penance Joke, I can move that here, and de-cramp the next panel. Basically, I saw the page and I realised I’d be damned if I was covering up that much of Valerio, and it needed to go.

It’s not just that though. While I am fond of the joke, it’s such a deep cut it’s going to distract in the moment. It requires a reader to have the knowledge of general marvel history to know Speedball’s codename in the 00s and the X-men knowledge to know Monet’s codename and to know enough about both characters to realise why that’s funny, which is a lot to ask when you’re trying to do an accessible event . Plus, this is the first line Sinister says in the whole crossover – I need to worry about his introduction landing. It’s entirely possible people don’t know who he is. You walk away from the panel knowing exactly what a punchable fuck he is.

Which is a lot of words to write, when the point is “if something doesn’t serve larger narrative purpose, lose it.” Or, as it’s commonly phrased, kill your darlings. Sinister would agree, but he’d also be happy killing anyone, darling. 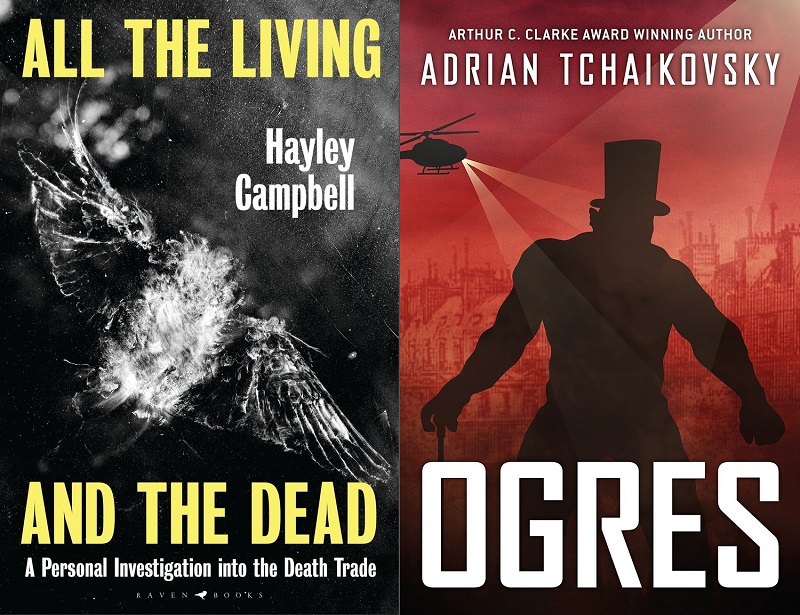 I’ve managed to actually read a couple of books.

It says a lot about me that when I managed to reclaim enough space to actually read something, and my first thought is “Oh, I know – I’ll read Hayley Campbell’s big ol’ book about death.” Knowing Hayley a little, I’ve been looking forward to this. She is someone who is so goth it makes me look like Betty Boo. Hayley is the daughter of Eddie Campbell, so grew up in surrounded by the imagery of the dead. In here, she describes how her childhood formed her own understanding of death, and prompted what she did here – which is to interview people who work in the death industry, to understand what his hidden and locked away. She talks to people including embalmers, anatomical pathology technologists, executioners, midwives who specialise in dead children and the people whose job it is to know what to do when a plane has reduced everyone aboard to portions no bigger than an orange.

There’s several hints in the above list which suggests that is not easy going. There’s one bit where I was reading late at night, I hit a sentence, and had to close the book, because I knew that I wouldn’t be able to sleep if I went any further. And still, first thing in the morning, I finished the book, bawling for a whole chapter. If it’s hard, if compulsive, going to read, it’s harder for Hayley – she looks into death, and finds herself more changed than she could dream. It’s compulsive for her too.

But for every awful moment and fact which will stick with you, this is actually a book that is weirdly, intensely comforting. With a couple of exceptions, the people who are there for the dead are exactly who you would hope would be looking after them. When I, or anyone I know, goes, they’ll be in the hands of people like this, and that seems important precious, and useful to know. When you walk through that door, you’ll have people like this with you, when even you’re not there any more. I haven’t shut up about it since reading it, or stopped thinking about it.

All The Living And All The Dead has just been released in the US and has been out out in the UK for a whle.

OGRES by Adrian Tchaikovsky is a novella and lighter, but it’d have to be going some not to be. This is Adrian in an interesting place between his fantasy and sci-fi registers, in a story about a low-technology feudal word where a scared humanity serves in a position of serfdom beneath the towering Ogres in the estates. And then, one day, someone says no. We follow the results through, as the bodies count up. If this was written in one mode, it could be YA. If done in another, it could be epic fantasy. Adrian takes a smarter, more uneasy way, turning to a second person voice, telling adding a sense of both complicity and warning to it. It’s an approach that’s always deliciously uncomfortable. Political in all the right ways, human in the way I like my fantasy (plus, short, which is ironic for a book about Ogres, I know). I dug this a lot – it likely is the second person element and the politics, but it almost had a Iain M Banks does fantasy vibe to it?

It’s out from Solaris.

I’m going to keep this end word short, because I want to go back and write something earlier (you’ll know if I’ve succeeded if you passed a couple of book reviews on the way here) and better Proper Content rather than the usual I Hav Ritten Some Words For My ComickyBooks, right?

But, yes, I Have Ritten. I finished off Immortal 10, which is the end of the first movement of Immortal X-men, and an issue I had a good chunk of a certain monologue written before issue 1 dropped. Hell, I had written much than I ended up using. Now I”m onto another X-men book – just a one off in the mix, as is the nature of X. It’s chunky, messy and absolutely wicked, and I’m having a lot of fun. Next is another X issue. I’ve also written a few intros – a short one to the DIE RPG trade, and a longer one for a new edition of a 1980s classic. Alongside that, I hope to work in some character descriptions for an artist so they have something to explore over the next month or two.

I have also been sweltering.

One of the neighbourhood foxes just passed through the garden, limping, a bite out of its left haunch. I think it was one of the cubs from earlier in the year. My heart is in my mouth.

Look after each other.

You just read issue #229 of Kieron Gillen's Wordmail. You can also browse the full archives of this newsletter.