227: a one dimensional dungeon crawler played with a modified doorstop

Exodus
A Rager
Return
Another Return
An X-men villain who I should probably reinvent
Links
You can handle the tooth
Byyyyeeee!!! 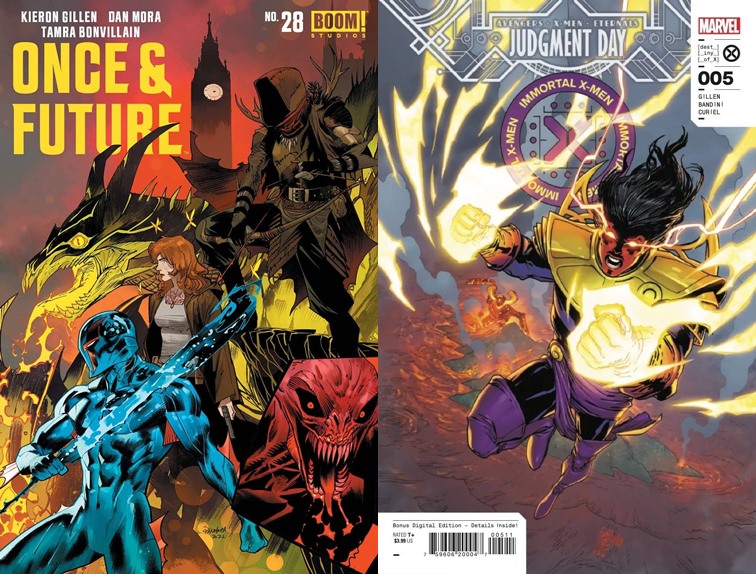 Once & Future #28 drops, and the story start cascading towards its climax. It certainly feels weird to release an honest to god Christmas issue when this country is recovering from its heatwave by experimenting with extreme extended humidity. We’re definitely in that point of the story where we move from keeping secrets to making sure everything we want to say is said before we head out the door. This is where we go deep into Arthur and Merlin, and tell a story about their past. And… well, a lot more too. I wish I could release the final two issues in a rush so folks can see how everything plays out, but alas, we can’t. The month wait for this one will be painful.

The first two pages of the preview are here… 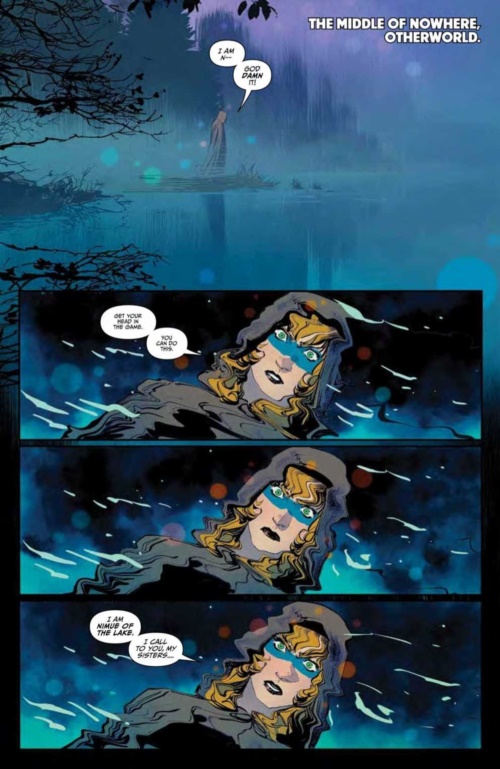 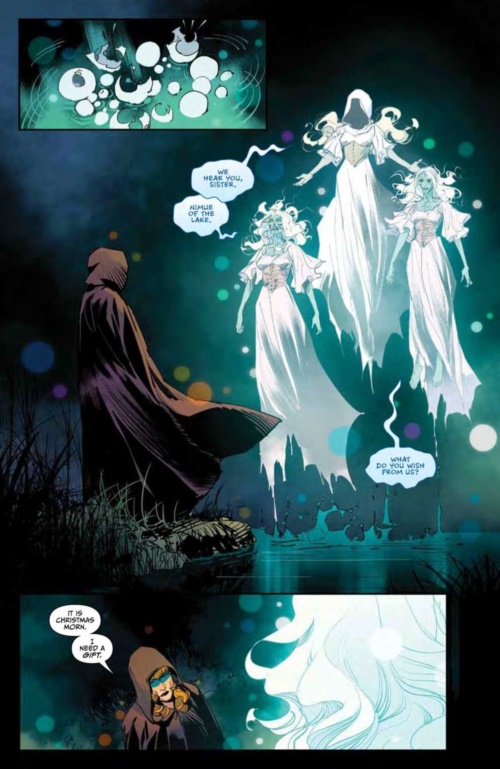 ….and you can read the rest on the link

Also out is Immortal X-men #5, which is the first of our AXE: Judgment Day tie-ins. Showing that I don’t change my methodology even if I’m writing the event I’m tying into, this is me carrying on my deep character dives, specifically putting our focus on top Devoted Catholic Mutant Supremacist Exodus, and is where I most explicitly show how he squares that circle. Michele Bandini joins me on art, and he’s doing wonderful, beautiful stuff – he’s got a style where everyone is so actively pretty it’s almost distracting. In a story which resonates heavily with religion, there’s something deeply devotional here. Here’s the preview… 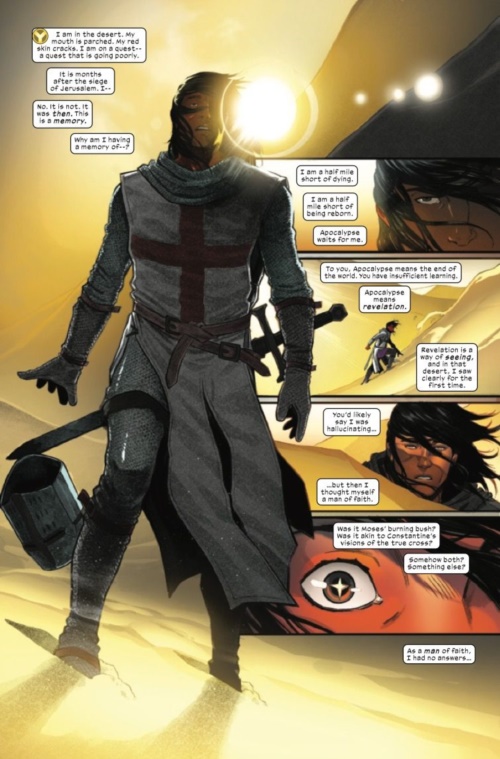 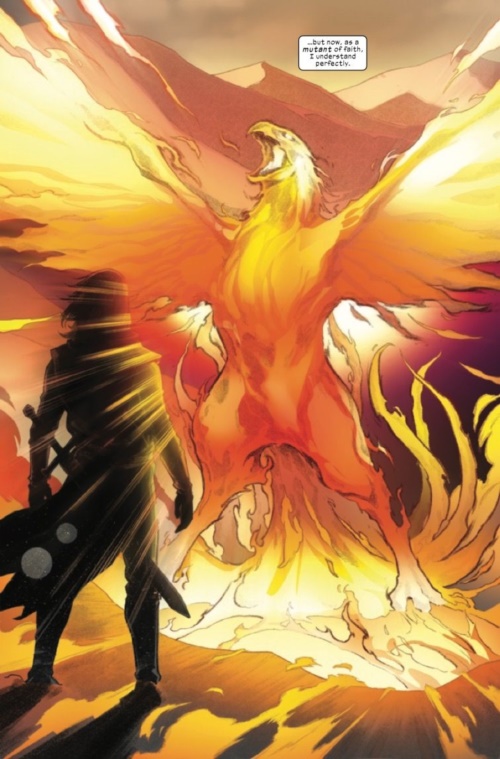 Both are available in shops now.

Oh – and a plug for X-Men Red 5 which is the first non-me Judgment Day tie-in, and an absolute doozy. 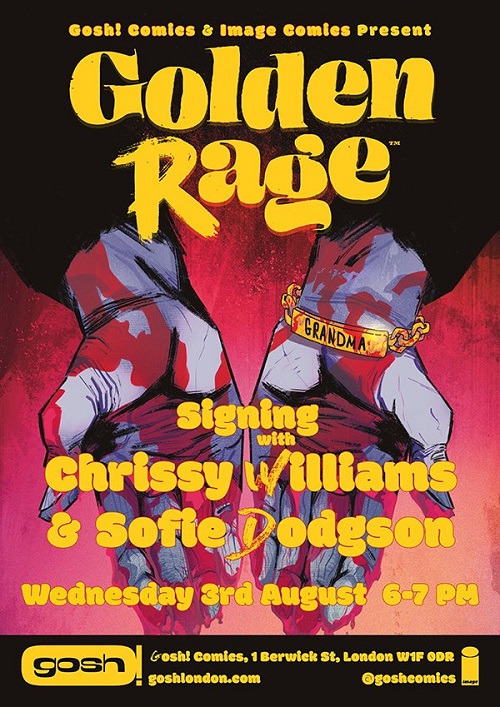 Also out today is Golden Rage #1, by Chrissy Williams, Lauren Knight, Sofie Dodgson and Becca Carey. I wrote about it in a bunch in a previous newsletter – in short, I think you’ll like it a lot. It’s high concept is Battle Royale meets the Golden Girls, but it’s more of its own thing, approaching the world with a viewpoint and moving at its own rhythms. Clearly I’m as biased as one can be, with the magical ring that binds C and I, but I’ve felt very lucky being able to see this come together.

Chrissy and Sofie are doing a signing today at GOSH in London, as shown above. Come along! 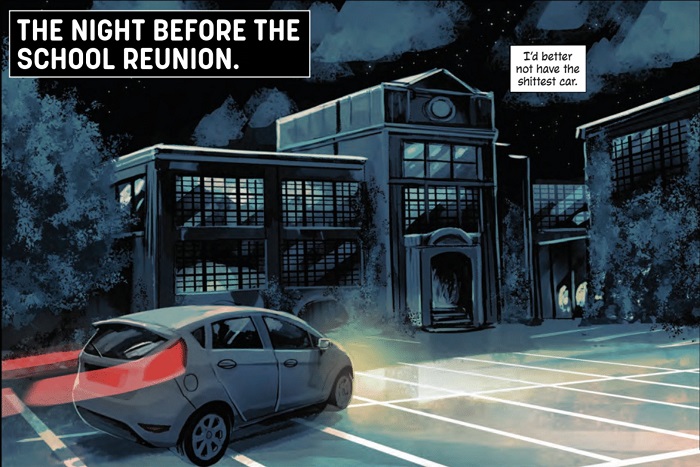 The only art left to do for the DIE RPG is the opening introduction comic. Which is (er) done, and being lettered. Stephanie being Stephanie and me being me, they’ll be some tweaks later, I’m sure, but I think the first panel seems solid enough to show. As always, applause for Clayton on lettering duties.

Also, the pre-orders for DIE RPG have opened. So, if you’ve missed the kickstarter, you can pre-order DIE here. Hurrah! You can also grab a bunch of Rowan, Rook & Decard stuff too. They’re at Gencon this week, so if you’re there, pop along and say hello from me.

October Image Solicits are out, and name is in there… 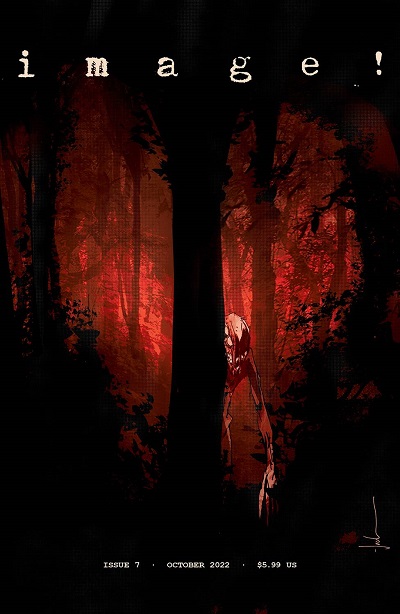 It felt weird to not have anything new from Image for a while. Glad to be back.

Closer is Steve Lieber, Tamra Bonvillain, Clayton Cowles and myself doing a little of the genre I used to call Apocalypse Romance back in the 00s. It feels very Phonogram too, in an oblique way. It’s a three part serial, which changes mode dramatically between each, but hopefully forms an aesthetic whole. I showed an unlettered page of this, which I’ll show again… 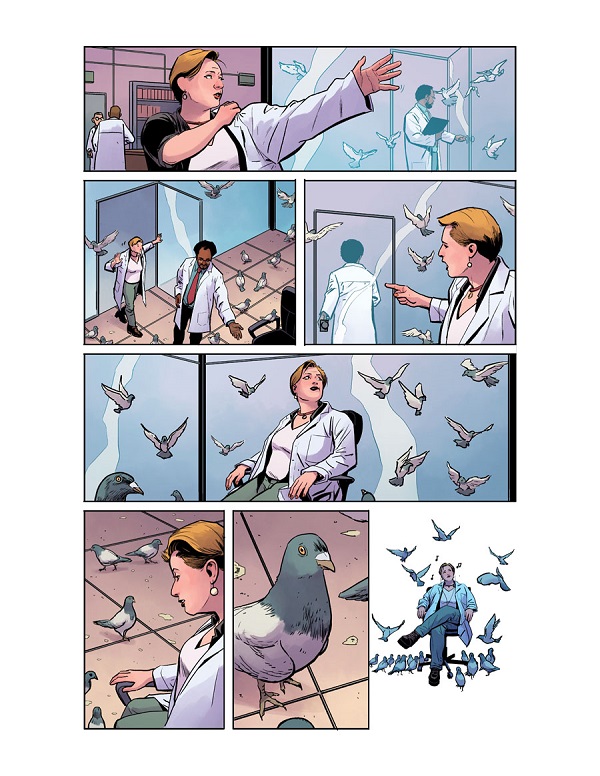 …as I want folks to come to this one fresh and be surprised. “There are pigeons in it” is all the spoilers you’re getting. 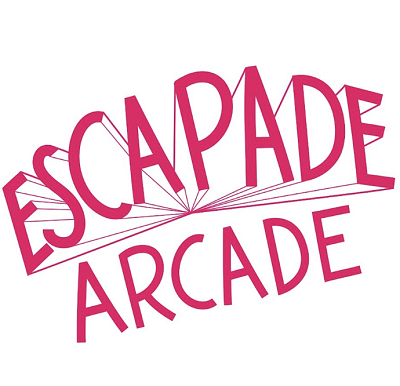 Here’s something fun for London (and near London) folks. Escapade Escape Arcade is a pop up games festival at the Enter Arts Space in Bethnal Green East London. (18 Victoria Park Square, E2 9PF). It’s presently planned to run until August 7th, with a small chance of it extending another week.

I love indie games festivals – their emergence about a decade back was one of the things which felt like a real cultural change, the reinvention of the arcade as high art and low entertainment simultaneously. This is a collection of alt-controllers and puzzle games as well as visiting Escape Room games playing in the Mushroom Cave screening theatre, so there’s a bunch of things to nose at (over twenty!).

I asked Mink for a selection of them and she said…

Red Light, Green Light - inspired by the Squid Game, run faster than your friends while the doll isn’t looking.

The Keeper and the Fungus Among Us, talk The Guardian dragon through his mission defeat the mushroom king and hear the Rocky Horror/Little Shop of Horror style musical numbers.

Line Wobbler - a one dimensional dungeon crawler played with a modified doorstop.

What a series of marvellous sentences. I’ve actually played Line Wobbler, which is just great. It’s eight quid to get to the arcade, and the visiting escape rooms are priced between 10 and twenty quid. Go nose at the site for more details.

It’s a whole bunch of playful and smart and… just look at the state of this. 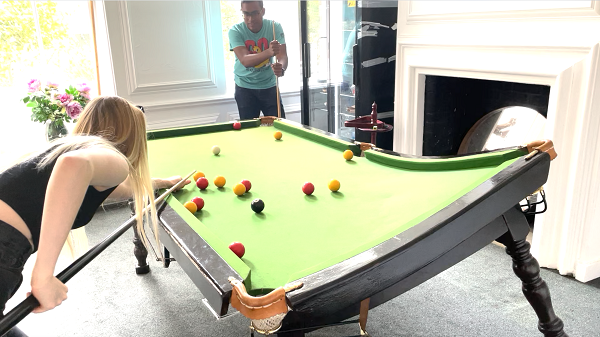 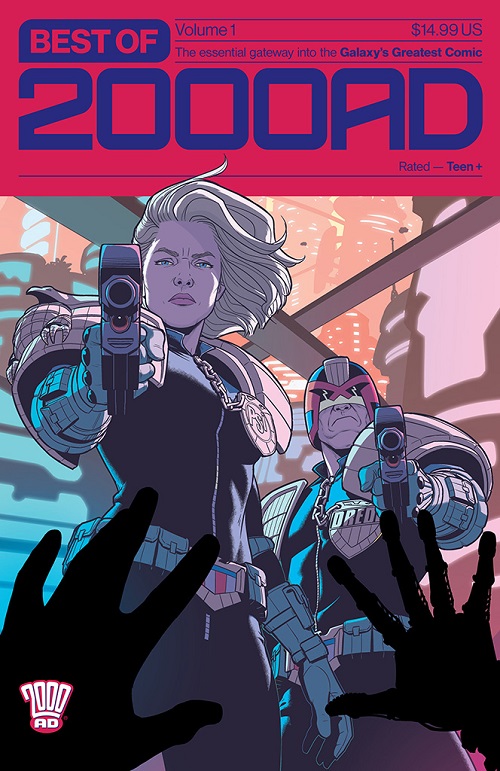 I went to Hastings for the weekend, where I discovered many things, including “Hastings is by the sea.” I dropped geography. I also started to inch towards reading for pleasure, including this.

An advance copy of The Best Of 2000AD had dropped through the mail. This was Rebellion’s big push for new readers, delayed by covid. Striking new covers from contemporary artists (including a certain Jamie McKelvie), killer Tom Muller design and a self-described mix-tape of content. 2000AD is a forty-year labyrinth of story, and this simultaneously gives you useful starting places while also giving you a great place to just be. There’s no need to read any more, and as a quarterly delivery device for comics, I think it works really well.

There’s an opening Judge Dredd, doing his one man riot approach to law. Then Brink, which I was unfamiliar with, which does a different approach to sci-fi law by putting it in orbit, keeping it really grounded and having everyone’s brains clearly being melted by cosmic horror. Then we have the whole of the first book of Halo Jones, the iconic Alan Moore/Ian Gibson series. With painful timing due to Alan Grant’s passing, we have Shamballa, his classic Judge Anderson story (which I’d somehow not read) with the always beautiful work by Arthur Ranson. Plus a couple more strips and critical essays. It’s a slab of pop.

I’m not an obsessive life-long Toother – I’ve read Halo Jones but nothing else here, and frankly, any excuse for a re-read of Halo Jones (this is a period long gone, but for a brit of a certain age, it’s Halo Jones which had the big cultural footprint – the band Halo James, Transvision Vamp’s Hanging Out With Halo Jones, etc). Even with the risk of having read some stuff already, I plan to subscribe – it’s a lovely format, and I’m interested in what the mixtape will present next, and in what context. If I hadn’t read any of it? I think I’d be absolutely thrilled. This clearly does its job. It’s just a great place to start to explore this huge swathe of British comics.

You can order your copies from Rebellion or your local comic shop.

I’m writing most of this a day early, as tomorrow being the Golden Rage signing means I’m looking after Iris, so won’t be able to do this then. Hopefully nothing major changes between now and then.

As planned, I handed in the last part of Judgment Day last week, which Tom seems to like, which is gratifying. It’s a weird ol’ event, Judgement Day, but it does land vaguely where I want to. This morning I finished the first draft of the Omega Issue, which means that in terms of ongoing comics work, I’m down to just Immortal X-men. That free time I was talking about is here, and I can already feel my brain straining to fill it. I was just watching the second episode of Paper Girls – and was delighted to see Matt Wilson pink on the screen – and found myself thinking about an idea I played with a while back. Perhaps I could…

No. Leave it be for a bit. You don’t need to write anything.

I’ll try to stay in slow mode for a while. There is one project which is without a deadline I need to talk to the artist about, and see when they’d actually like to start work on it. It’s the sort of thing I could idly work on by myself. As it’s an Image book, I likely need to start looking for an editor to hire – C can’t be full project manager right now. That the thing that prevents me doing more comics is being disorganised to not get around to hiring someone to be organised is somewhat telling.

“Working idly by myself” is perhaps a useful mode to aspire to. I’d love to be in a place where I could just give an artist twelve issues, in the writer equivalent of throwing a stink bomb and running out the room, cackling.

At the least, I’d like room for smaller things around the edge. There’s a short indie rpg want to finish writing up, playtest a bit and release. Perhaps more one off stories like Closer. Perhaps sleeping, Iris willing.

But not another Marvel event.

You just read issue #227 of Kieron Gillen's Wordmail. You can also browse the full archives of this newsletter.