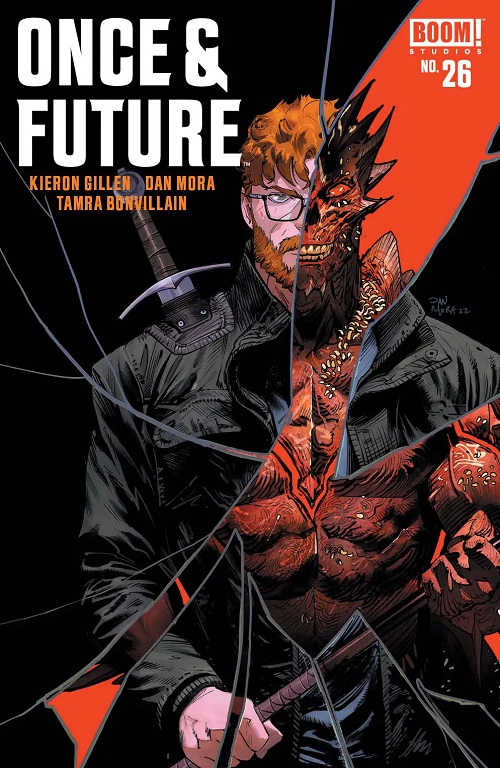 Once & Future’s back, with the second episode of our fifth arc, The Wasteland. This is kind of a bridging episode, where we the status quo of the last arc, and move forward to where we want to be for all the rest of the arc. Also, includes perhaps the most dramatic representations of Margate in comics history, which probably makes visiting Spurrier tax deductible.

There’s one panel in this issue which makes me smile a lot. It’s the one which could be from Phonogram, or at least the bit of Phonogram that Kid-with-Knife narrated.

Anyway, here’s some pages from the preview… 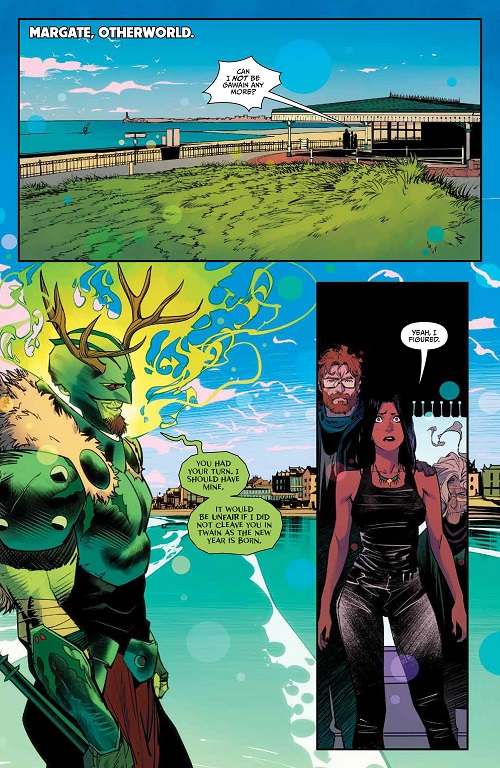 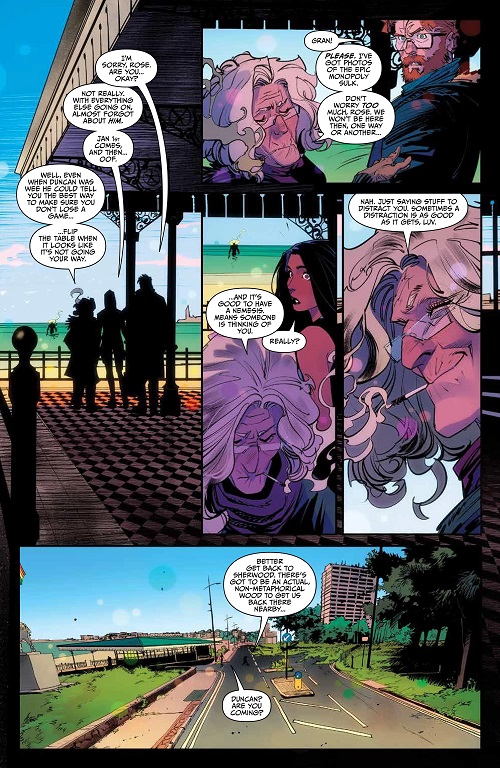 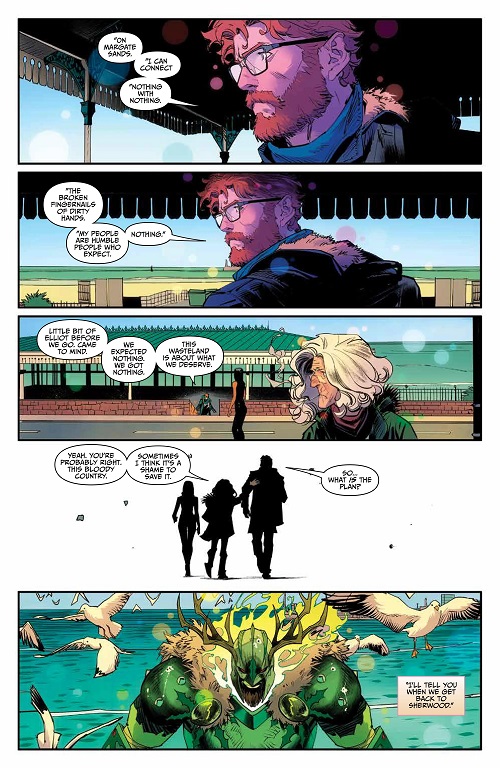 …and there’s some more here. You can buy from shops or digitally. 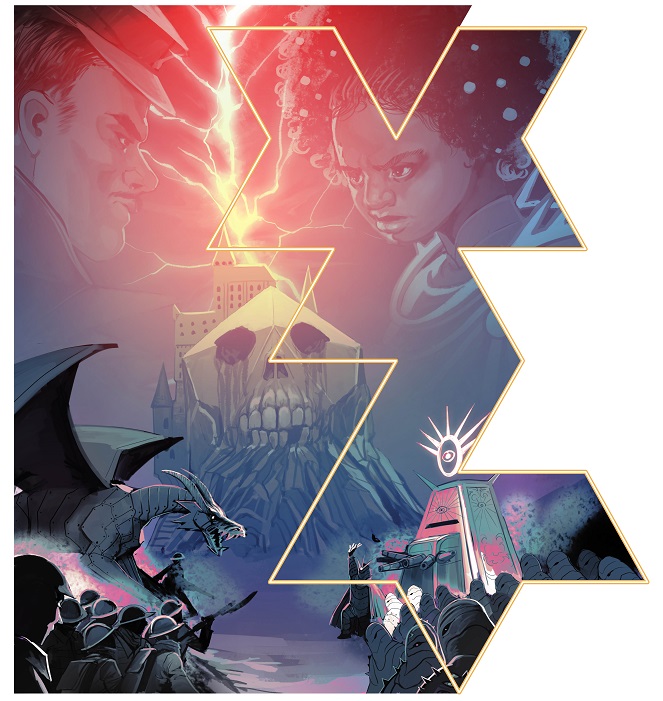 DIE’s kickstarter continues., and it’s still going really well. We’re in that middle of the kickstarter amble now, but passed 325k yesterday, which unlocked Tini Howard’s monsters for the bestiary, and we’re working towards Elsa Charretier doing a piece at £350k.

Behind the scenes, things are progressing well too – the first of the stretch goal writing and art has started to arrive, which is fun to see – smart and talented people, doing their things. We’re going to use the extra art to illustrate the bestiary, which seems the best way to keep the book feel coherent – and also lets us see what (say) Marguerite Sauvage does with a Vampire. Spoilers: she does an awesome vampire. That the text for monsters is arriving simultaneously really makes this section of the book really feel like it’s being willed into existence by everyone’s support. So thank you! I think you’re going to like it a lot.

There’s a fourth update here from RRD, for those who want to know The Hot Goss, but we also did a whole bunch of press.

Let’s start with my old comrade in arms Jim Rossignol’s newsletter, where we do what we’ve been doing for over twenty years now – ejaculating huges swathes of nonsense at one another, with great determination. As always, fun.

Not DND recorded a stream with Grant and I, which you can watch on Twitch here and a youtube version here. See the Grant and I road-show one more time. Will he manage to stop me saying Cartesian this time?

I popped into Wandering DMs talk about DIE – this is about the comic and the game, and how they intersect, and goes in very much over the material it’s mining. 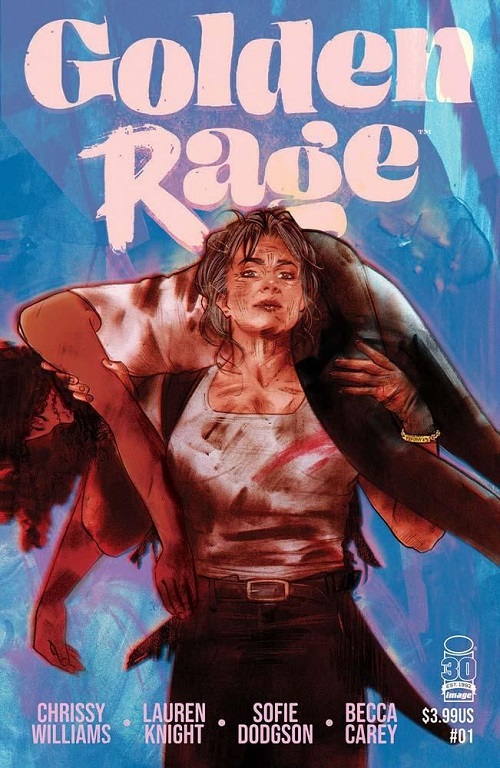 Talking about folks who are doing art for DIE – Tula Lotay has done an alternate cover for the first issue of Golden Rage. Coo!

I talked about Golden Rage last time, so you can catch up here. or just go and tell your retailer you want to pre-order it.

The plan as described last time is in effect. I finished an unfinished issue off on Monday. I finished another one today. I’ll be aiming to finish another on Friday, and them I’m out of this deadline hell, and into a more reasonable, usual, friendly neighbourhood deadline hell. It’s not quite my next being 4-6 weeks off as I said last time, but there’s certainly more space – I’ll likely go straight to Death to the Mutants 3, because I think Guiu will need it in 2-3 weeks or so. Then it’s a toss up between Once & Future 29 and Immortal 9 – likely O&F 29, but we’ll see. I’d love to do O&F 29 and 30 back to back, but I also would love to do Immortal 9 and 10 back to back, but the space will only likely support one. 4-6 weeks is a long time, but not an infinitely long time.

Anyway – all of the above will be significantly better problems to have than the My Brain Is On Fire I’ve been dealing with recently.

The real extra work now is DIE related – after the editorial pass, there’s a couple of chapters we want to do more work on for clarity’s sake. This is why we do editorial passes, right? It’s going to lead to a better book. There’s also space for a couple of things I want to write for the book – only a couple, but they’re really useful and additive. Now the manuscript is so much through the editing process, you can really start to see the structure of the book, and where it can be easily tweaked. This is going to be even more true as we move through more of the design process – Stephanie has finished her first two chunks of art, and is moving onto the third, where she’ll be working close with the designer to see what we can really do with this book.

Anyway, what about life aside from work?

Okay, joking aside, it’s all fragmentary – aside from childcare and writing, there’s only a few spaces. It’s certainly a period that I’m aware that I’m lucky to love what I’m filling my life with, because if I didn’t, I’d be in real trouble. Even so, it still does get a bit much – I was a bit overwhelmed finding myself having some space at the weekend – like stopping for a second and realising you have no idea what to do. I went for a friend in the garden for a quick drink, and it was blessed.

TV in the last few weeks? Taskmaster. Drag Race. Always Sunny (our present 20 minute TV show staple). Barry. An episode of Obi-wan. A special mention to Derry Girls, which was just a lot, and really inspirational on lots of levels. I can’t believe it took me until the final episode to realise that Orla was Kid-With-Knife, and her opening was pure Singles’ Club Wolf Like Me. In the weirdest way, I found myself comparing it to Peaky Blinders, in that one had to end at the start of WW2 and the other had to end with the Good Friday Agreement. All those beats where hugely close to home, and actively painful perspective in a period when the UK government is risking setting fire to all that which was so hard to create in the first place. Which is this government in a sentence, really.

Reading? Put it like this: it’s lucky I’m a fan of the X-line, because that’s about all the comics I’m able to stay on top of. I read X-men: Red #4 this morning, and it’s great stuff. And you haven’t even read #3 yet. The comics industry has become unstuck in time.

You just read issue #220 of Kieron Gillen's Wordmail. You can also browse the full archives of this newsletter.