Golden Rage Against The Machine
Have I mentioned the Kickstarter
Si
Come at me, Cerebro
Links
Byyyyeeee!!! 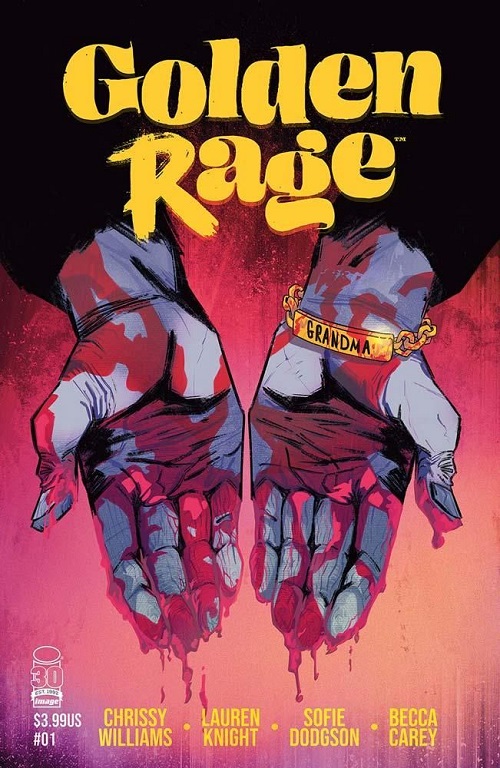 And a New Image book is emerging from this house.

DIE/WicDiv Editor and poet Chrissy has written a comic, Lauren Knight has drawn it, Sofie Dodgson has coloured it, Becca Carey has lettered it and Joamette Gil has edited it. It’s called GOLDEN RAGE and it’s out in August.

The one-line high concept is “Battle Royale meets the Golden Girls” which is the sort of sentence which gives me a lot of joy. “Old women are formidable—I wrote Golden Rage to reflect that,” said Chrissy, “These characters are tough, capable, kind, and funny. I’ve fallen in love with the combination of cake and stabbing weapons, and hope you will too.” “Battle Royale meets The Golden Girls with dashes of Agatha Christie and Logan’s Run. I’m all the way in!” said a certain Kelly Sue DeConnick

I’ve had the pleasure of seeing this come together over the last few years, and it’s a real burst on the page, and full of the joy of creators exploring really unusual terrain, in a quirky fashion. I hate to reference my own work here, but its high concept leaves as much out as “Goth Jumanji” does for DIE. Come for the Battle Royale Meets The Golden Girls, stay for the real humanity oozing from every part of it. It’s a meditation on all the big questions, plus cheesecake, which is a big issue in my book.

Chrissy’s thread introduces her team here, and talks about the book and here’s a preview of a few pages… 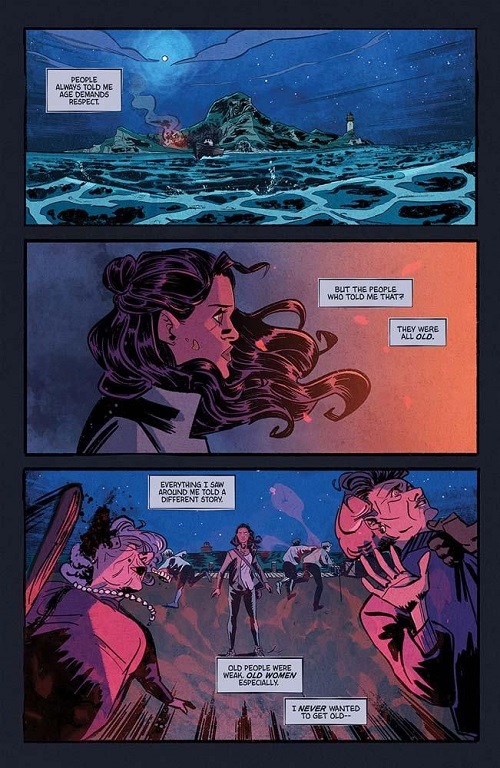 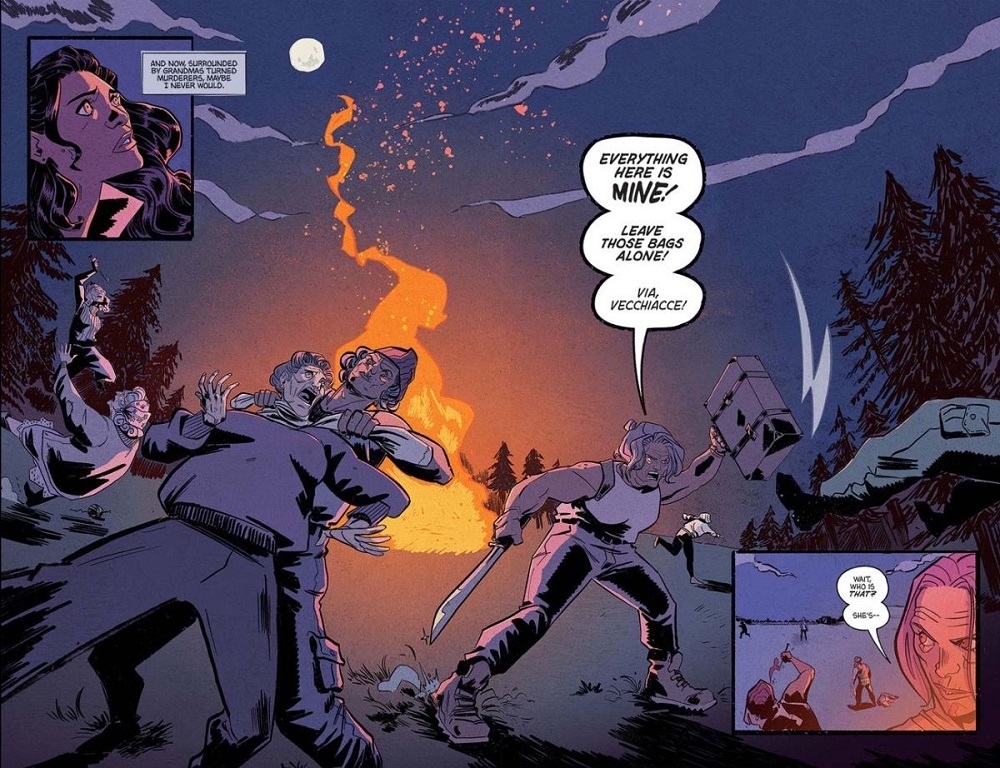 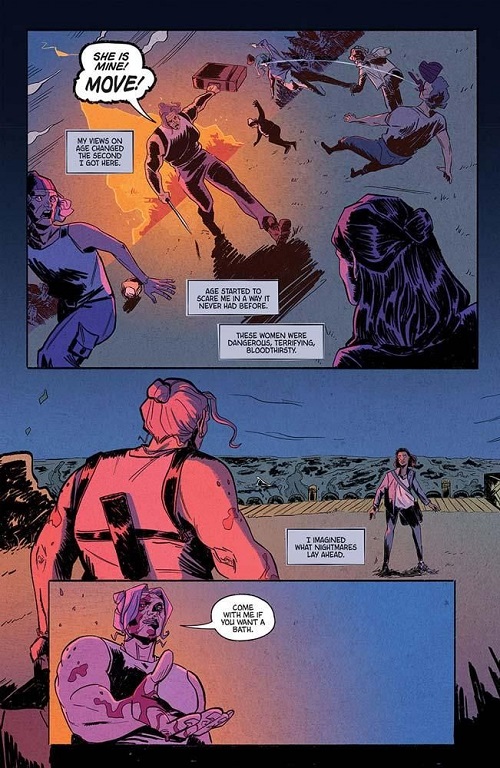 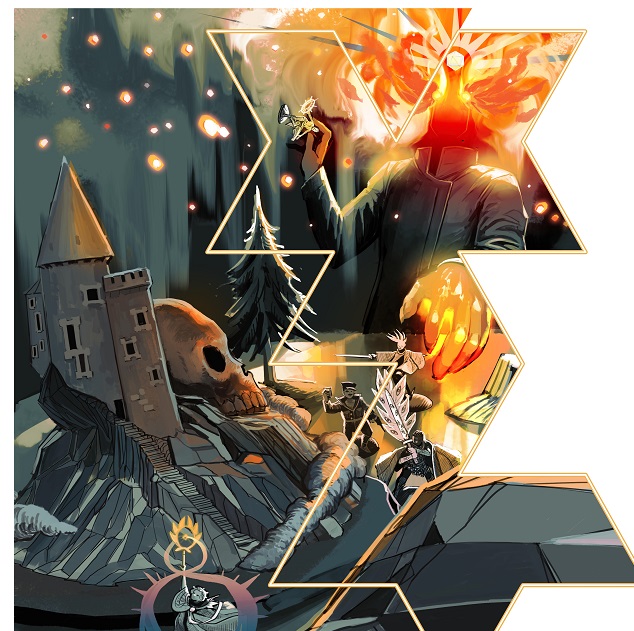 DIE’s kickstarter continues., and it’s still going really well. We’ve crossed 300k last night, and continuing upwards. If you’re a KS follower, you’d know this is the structure – big rush in the first few days, and then (hopefully) a fairly steady increase until the last two days, when everything often goes haywire again.

(It’s because of a final push towards late stretch goals and because KS sends a reminder to everyone who’s chosen to watch a campaign to remind them to back.)

So we’re happy. We burned through all the stretch goals we listed last time, and have released some more. When we crossed £300k we unlocked Jess Nevins, and the next target is £325k for the X-office’s very own Tini Howard. Er… I mean to unlock a goal for them to write some Bestiary entries. We haven’t got them in a cage or anything.

Also there’s been some more press.

If you actually want to actually see how DIE plays, we can help. We popped down to Dicebreaker and ran a short game of DIE Core for them. You can watch it here. This was lots of fun – it’s compressed, but we do hit a bunch of really neat stuff in the game, and the players (even Grant) were all excellent. 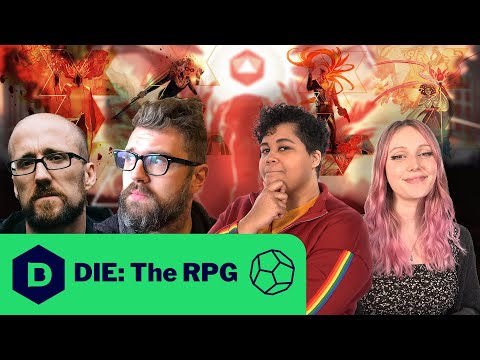 Comics XF published a big interview. It’s by Rasmus Lykke, who is both familiar with the released beta and my broader work (He’s author of the excellent PxP STYLE AND SUBSTANCE book on Young Avengers). As such, it’s a deep delve. First half is the big philosophical stuff, and the second really digs into what we’ve done to the game since the Beta.

Here’s a quote to give a taste…

The RPG is a sort of love song to a lot of forms of gaming. All the real world stuff is 100% me working in the rules-light (or free) narrative game tradition. The fantasy world stuff is stripped down “objective” world modelling. The thing I’m most interested in with DIE is how the two interact – the persona level stuff is less solid, existing only as narrative, but is about the real world. The character level stuff is arguably more solid, existing only as mechanics, but is about the fantasy world. There’s a whole mind/body Cartesian thing going on – the Persona are mind and the Characters are embodied.

At which point I imagine Grant [Howitt, from Rowan, Rook and Decard] throwing a brick at me. This is me just riffing on what is there, and I haven’t even touched the bit where we sneak in a quasi-Nordic LARP for 10 minutes…. but I’m aware this just makes it sound like the most wanky stuff imaginable, and in practice, it’s not that. This stuff underlies it, sure, but it just means the game asks interesting questions to the players, and the fact all players’ answers are valid, means the game hopefully has something for them. The game, at every level, is about “So… why do we play games?” and the “we” is “the people around the table.” By the end of the game, the players have come to some kind of agreement, possibly at sword point.

I also had the distinct glee of being a guest on the Gauntlet Community Podcast. ]The Gauntlet is a place I play, but I’ve been listening to the podcast for at least a couple of years before I joined. So getting on and talking a whole bunch about games (including DIE) was a joy. If you want to know what I sound like when I’m chatting about games, in a more casual setting, listen. Listen anyway. It’s a lot of fun.

I actually do a reading from the Bestiary in it, which went really well, and now I’m thinking there should be poetry readings of Game Manuals.

I talk to Si Spurrier about Legion of X #1. Go listen. 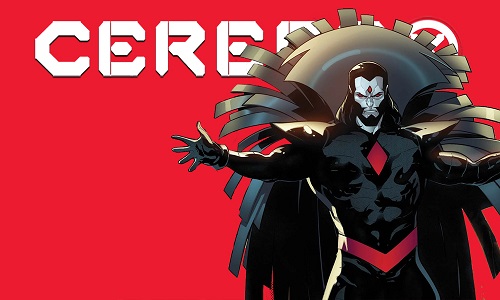 Connor Goldsmith has me on to talk about Mister Sinister, that scamp.. This was lots of fun, circling around my relationship with X, Sinister specifically, our fave Sinister stories, a bunch of Q&A and the character file.

I still haven’t finished the Moore Maestro class, but I have read the one book recommendation he gave in it – Mark Forsyth’s The Elements of Eloquence, which is a short and pithy book breaking down the various rhetorical forms in English. Short essays. He gets in and out, before setting up the next one.

Good? Well, I hit this bit… 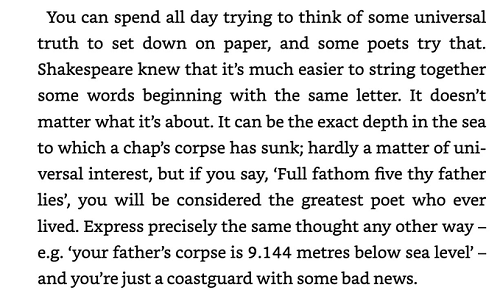 …and I was all in. Just thinking about sentence structure and shape methodically has been a really useful way to examine the absolute fundamentals of what I do on a daily basis.

Last time I said I’d tell you how a freelancer balances as many deadlines as I presently have. I’ve decided against it, because frankly, it may give someone the impression it’s something to aspire to. How do you do it? The real answer is: don’t. This is a bad situation to be in, is always in danger of imploding, and has involved a lot of begging forgiveness from my collaborators in terms of how issues have been coming over. Even if I’ve been careful giving complete sections with no continuity to the unwritten bits, no-one likes having scripts coming over piecemeal.

And still, the word addict in my head can’t help but be proud of pulling it off, at least so far. I’m even happy with the work – the sense of delirium to it really suits the tenor of the stories I’m telling. I handed over Immortal 8 yesterday, and I was so charmed by it I ended up telling my mum the whole plot on the phone.

The pressure is easing now. I worked last weekend, but had enough time to do weekend things. I started the last of the extra-issues today, and will hopefully have the majority of it done by Friday. After that, next week is just finishing the incomplete sections from two books (6 pages of Immortal and 8 or so in one of the AXE specials) and I’m back to my usual schedule, without a deadline for 4-6 weeks.

Well… a comics deadline. The DIE manuscript needs my attention, as there’s various editorial notes I need to execute in the back half.

I take this second to lean back in my chair, and wrap my fingers over my head and realise that I have something else to do.

I need to shave my hair again. I am unbearably fluffy.

You just read issue #219 of Kieron Gillen's Wordmail. You can also browse the full archives of this newsletter.