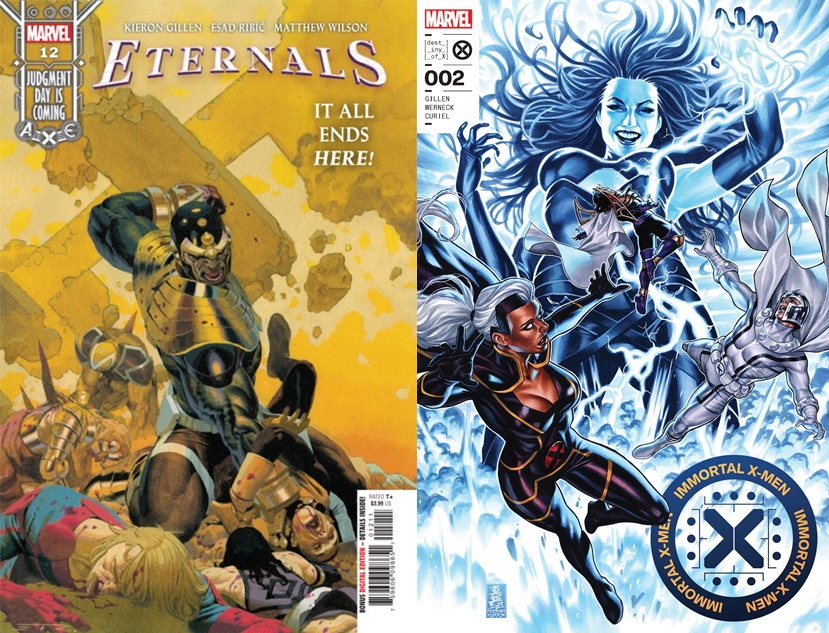 Firstly, Eternals 12, which is end of Esad and my run on the book. Lots of stuff in the issue – to say the least, it makes it much easier to talk about Judgment Day now. I’m really proud of these 12. We set out to do a job, and I think we did it.

Worth noting, if you’re interested in following my stories about the Eternals, while there’s not an ongoing book through Judgment Day, there’s at least a trades worth of issues coming out during the event. In a different universe, I’m sure AXE: Eve of Judgment would have been Eternals 13, and written as much of a jumping on point as it is. Death to the Mutants would follow from there and… well, I can’t talk about what isn’t announced yet. But there’s more Eternals story to come in the next few m. I mean, as Judgment Day has a lot of Eternals in, there’s actually even more Eternals story coming out than usual.

Preview here. Find in your local shop and online.

Secondly, Immortal X-men #2 arrives. Frustratingly, it’s been delayed due to the production chain issues which have been battering the industry, but I’m glad it’s finally with you. It’s the Hope focus issue, and shows how we do business. The line I’ve been using is “A week is a long time in politics: an issue is a long time in Immortal X-men.” We motor.

Preview here. In all good comic shops and digital ones too. 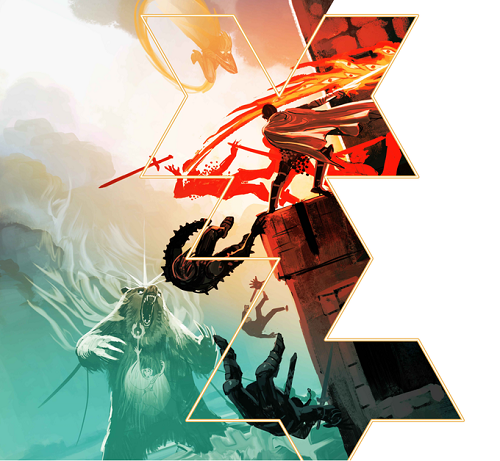 Things have been hectic – I address you to this post which describes the stretch goals. We’ve passed the 250k one, and nudging towards the next one. Lots more art, lots more bestiary monsters, and a pay rise for all the contractors. Good stuff.

Also, those 200 Grandmaster pledges all went in 24 hours, which is amazing considering they’re such a hefty pledge. Talking to Level Up Dice, and we’ve managed to secure more resources to expand the tier – we added another 200 to them, so if you were disappointed, you can jump aboard.

We also decided to add something else to the Grandmaster tier. Talking to Campaign Coins, we’re lobbing in five pieces of Fair Gold (as in, the fancy coins the Neo use to power their abilities) in a little sack. Just a little extra thing, but delightful. Here’s Stephanie’s rough design for them…

Which is lovely, right? You’ll also be able to add them to your pledge at any level at Backerkit.

If you’re a comics person, and want an overview of what we’re up to, I’d direct you to the AIPT Interview and the comicbook.com one, where Grant and I break down the core DIE stuff.

However, for more of a tight RPG perspective and an absolutely delightful piece of profile writing, I direct you over at io9. This was an amazing piece to see.

You really haven’t attended a chaotic interview until you wake up at 8 a.m. to speak to game designers and comic writers in the UK, only to have them talk about the merits of Chicago pizza versus the more “traditional” New York style. Kieron Gillen (DIE, The Wicked + The Divine, and many, many more) is married to an Italian woman, and he has opinions. “It’s just cheese on toast,” Gillen said.

“Please,” intoned Grant Howitt (Spire, Heart), a game designer and co-founder of Rowan, Rook and Decard, in the rather woebegone voice of a man who has seen too much shit on Twitter and doesn’t want to see any more. “Don’t tell the internet that Kieron Gillen thinks pizza is just cheese on toast.”

Gillen, seeing his friend in pain, and clearly delighted by the utter absurdity of this interview already, chuckled. “You’ve caught me in a mischievous mood today,” he said.

More stuff next week, obv. We recorded a Lets Play on Monday at Dicebreaker, so you may even able to watch Grant, Myself and chums play the game.

I talk to Vita about New Mutants #25. Go listen.

I probably should work out a way to do a Decompressed logo or something easily? Like, a template I could plug stuff into? That would make this bit of the newsletter prettier.

By next time I think sufficient space should have opened up for me to explain how little space I presently have, and how a creative (or at least, this creative) manages periods of intense pressure. I feel like I’m doing an Olympic performance in plate-spinning, which is partially true (I’m amazed this is kind of working) and partially delusion (it’s not an Olympic performance if part of your tactic is just recognising which plates you’re fine with smashing onto the ground.)

But the main thing is an awareness that this is only for a brief period. By the back end of back week, I should be back to my normal pace. Even better, a month or so after that, and my work becomes something that’s actually pleasant. I’ll be able to stop, look around, and work out “What next?”

On the other hand, Derry Girls is still great, so things could be worse.

You just read issue #218 of Kieron Gillen's Wordmail. You can also browse the full archives of this newsletter.