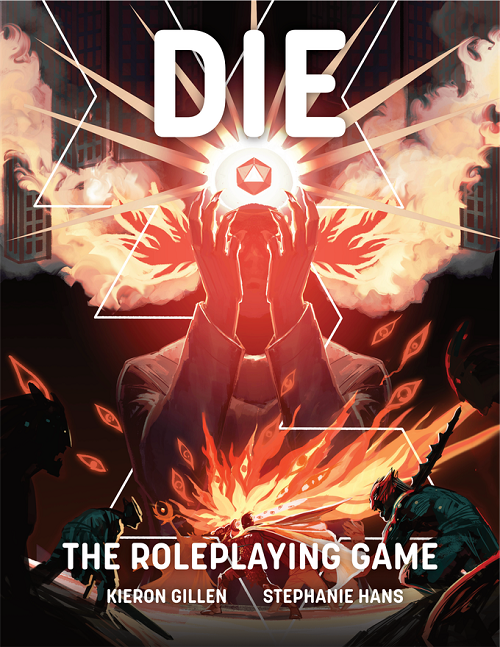 The DIE Kickstarter is live I’ve been so busy that the sheer crowdfunding panic didn’t completely hit until lunch, when my brain went boink.

Anyway: DIE RPG. It’s been in the works as long as the comic, created as an equal sister project . I extracted this huge amount of material from my brain, hooked up with Rowan, Rook & Decard and took tonnes of raw iron to turn into folded steel.

What’s it about? Go to the page and nose. I’m going to walk you through the various options, but there’s a whole lot of Stephanie art, the stretch goals, the mock up pages, recommendations plus there plus a video where Grant and I explain DIE.. The video is the best 2 minute quick intro. 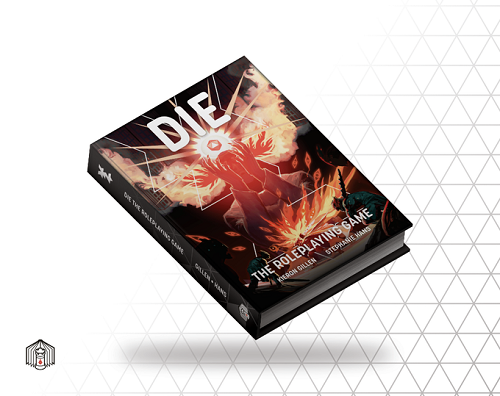 Firstly, there’s our standard edition for £40 or £20 as PDF. Everything you need to play DIE, in a US Letter hardcover format.

I’ll note a couple of things here – firstly, the delivery date. The ETA for the PDF is July this year. The ETA for the Hardcore is this November. We delayed this from last year, but work continued, and KS willing, we’re close to getting it into people’s hands..

Secondly, the postage. This will be sorted out on Backerkit afterwards, but in a period where Kickstarters have often had huge postage costs, I think you’ll be impressed with what RRD are estimating for ours – £5 for US/UK, £8 for EU/CA, £12 ROW for a book. Apart from loving their work, one of the reasons I was really attracted to RRD is how they’ve reliably handled distribution previously. 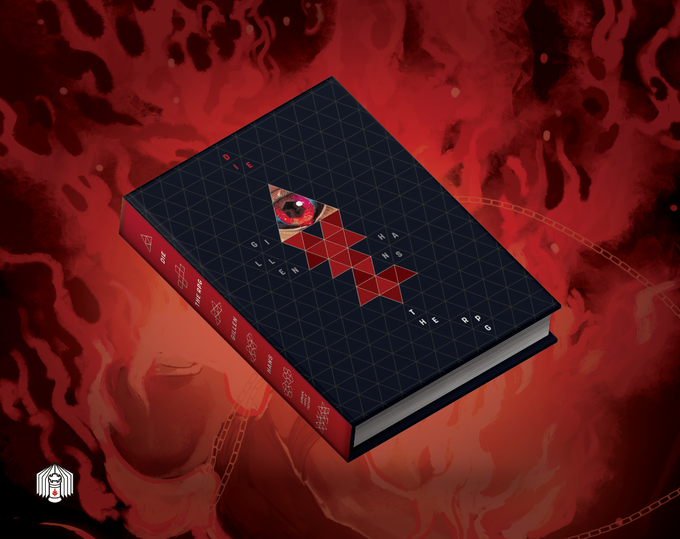 Then for £80 we’ve got the deluxe limited edition cover, courtesy of the legendary Rian Hughes. It’ll come with a slipcase (which we don’t have a mock up for yet). Coo! There’s also other stuff. Stephanie’s done this excellent GM’s screen… 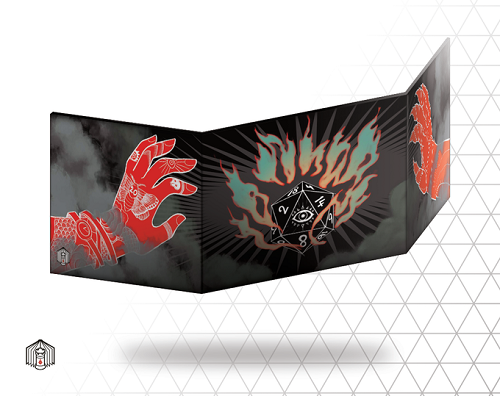 ….and we’ve got a set of your own resin DIE dice. 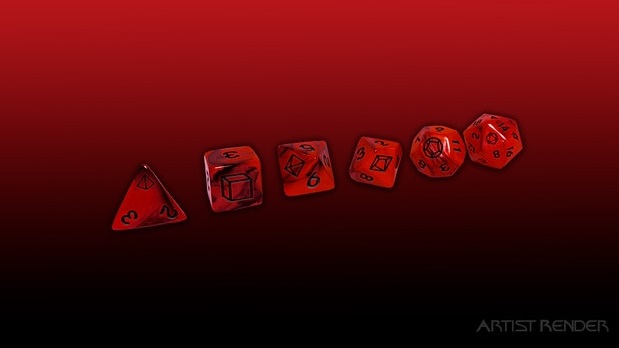 To add both the screen and the dice to the basic Hardcover pushes the price to £65. To add them to the special edition hardcover pushed that to a round £100.

And then there’s Grandmaster Ultimate Pledge, the fanciest of the fancy level, whose star in the firmament are… 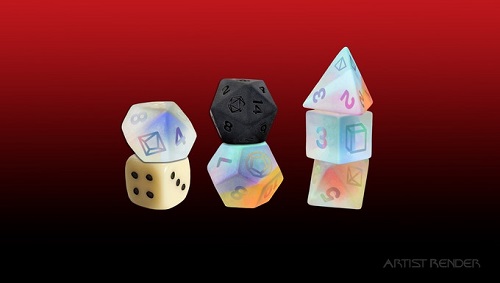 Coo! These are six custom dice, one for each character class. The five player dice are made of a holographic glass which shimmers and reflects light astoundingly. The Master’s D20 is made of actual obsidian. There’s also a dice for the fool which is the cheapest dice we can find (but the fancy D6 is also in the set, so you can taunt Fool players).

Both Dice set are made by Level Up Dice. They were able to guarantee that the gemstones used are ethically sourced, which we always had as a dealbreaker. Also they pay all their employees around the world an Australian wage, which is also important. I’m really excited we’re able to work with them. Oh – and the images above are renders, but go see the dice they make on their site to see what they can pull off.

As well as the fancy-fancy dice, The Grandmaster Ultimate Pledge also includes the Rian Hughes special edition of the game, the GM Screen. That’s all for £275.

Oh, and if you back any tier with dice in, you get a box to keep ‘em in. 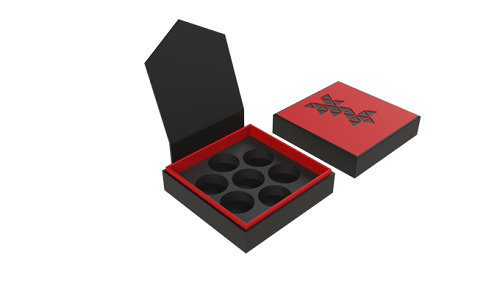 Anyway, that’s DIE. The Betas are still available if you want a taste of the game in an earlier state though we’ve come a long way, and are a lot less intimidating in size. This is a project that editing really has helped. If you flick through the 1.46 character sheets, you’re most likely to get a taste of a more modern form, but even they’re inelegant compared to where we are now. If you want to see a game ran, I’m filming a video next week which I’ll link to when it’s up. There’s plenty of lets plays of it on Youtube though – here’s a slightly tongue in cheek game I ran at Thought Bubble for an all-star cast, which gives a taste.

I’ll be doing more about this in the coming weeks, but do go nose. I’ll be answering questions folks may have along the way, I’m sure, and there’s a whole bunch of press and podcasts I’ll be doing too.

It’s a game about my love of RPGs, and I wrote it to share that love with people. Really, I’m just excited of the possibility of the best DIE we could manage being in everyone’s hands.

It’s not all just DIE RPG around here. A couple of covers for new books dropped. 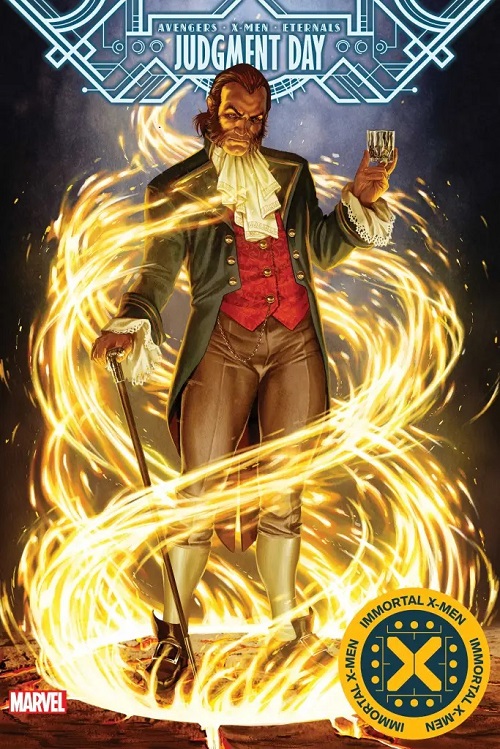 Immortal X-Men 6, which ComicXF have the details on.. Mark, once again, kills, and gives us a brilliant bastard of a Shaw. 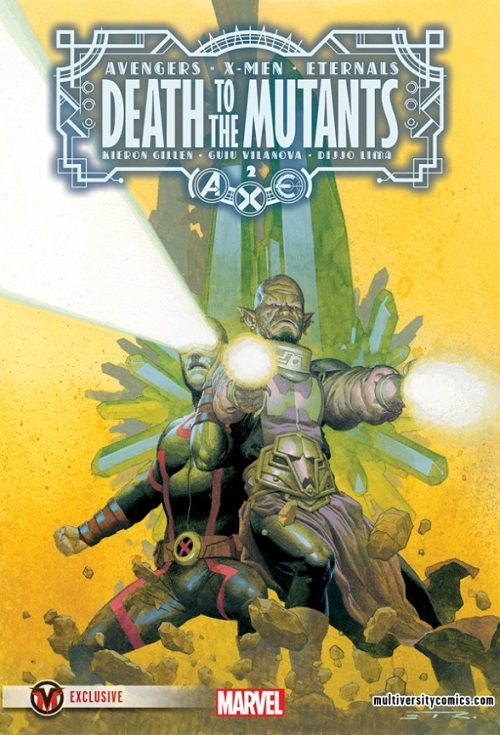 Multiversity introduce us to Death to the Mutants #2 where Esad, once again, kills and gives us Kro and Cyclops, living the dream.

Both are out in August.

As you can guess, today’s a busy one. Just the Kickstarter would be a lot, but I’m also wrestling with the various Judgment Day commitments and having my first day of proper child care for Iris after I finally reliably started testing negative for Covid. I was clear every morning from Saturday to Tuesday but had a line in the afternoon. It’s been a lot, to say the least.

As such, I beg your forgiveness, and I’ll catch up next time. Which should be next week, when Immortal X-men #2 joins us.

p.s. Seriously! Watch the Kickstarter video! We literally all got covid from going into town to film it, so we have paid a tithe. We think it was from the place that served us a burger afterwards, which claimed to be the best burger in london. In retrospect, this feels like a Hitman level, where we were lured in to be poisoned by a clever bald man with a sign. That said, it was a very good burger, so ¯_(ツ)_/¯ .

p.p.s. Last time, I entered it as newsletter 116, instead of 216, and no-one corrected me. Which makes me happy, as it means I’ve hardened you all to my typo-happy nonsense. Hurrah, etc.

You just read issue #217 of Kieron Gillen's Wordmail. You can also browse the full archives of this newsletter.