215: murdered with a sharpened graph 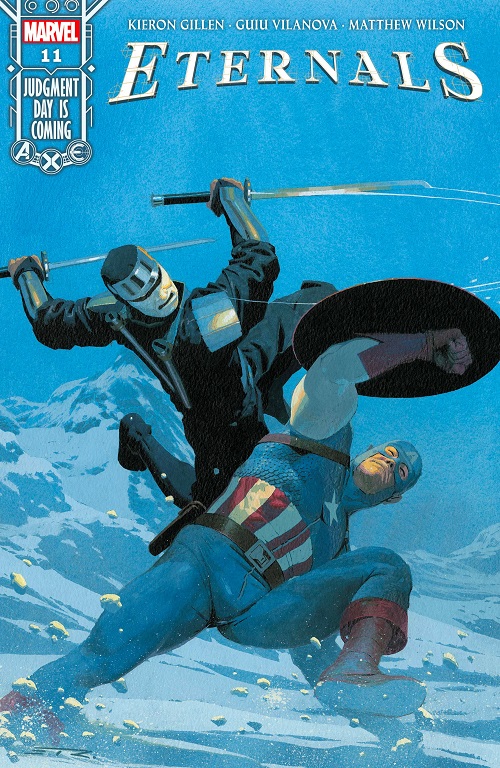 Eternals is back. We pick up where we left off – our heroes just discovered inside Eternal mountain, while also trying to save a town from being melted. It’s a busy life, being an Eternal. This issue is drawn by Guiu Vilanova, who helped out with issue 9, and does amazing work with this larger canvas. I’m especially enjoying how he works the intense emotions throughout – there’s some bits of Ajak in here which is pure rage. Esad is back next time, to wrap up the arc.

Here’s a few pages from the preview… 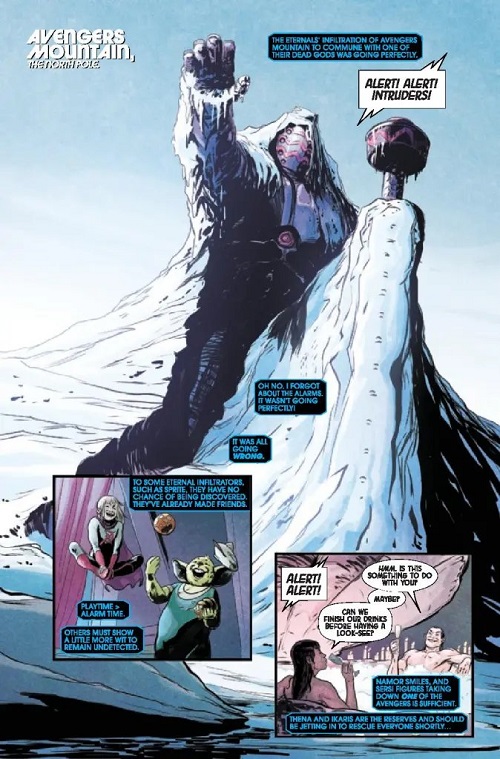 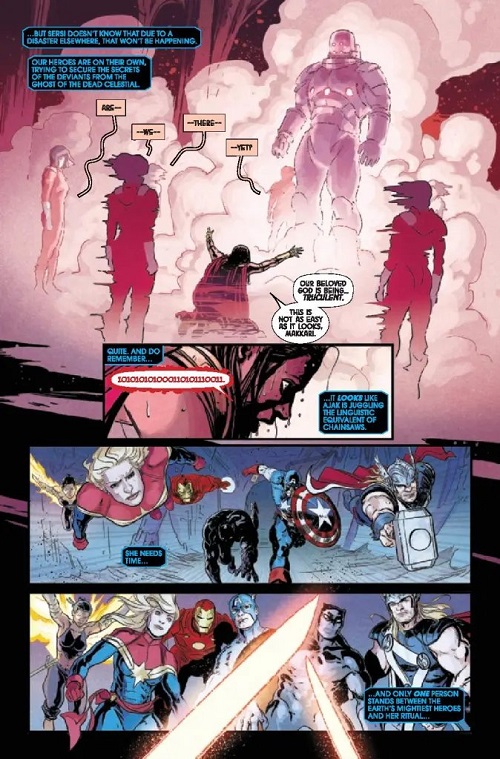 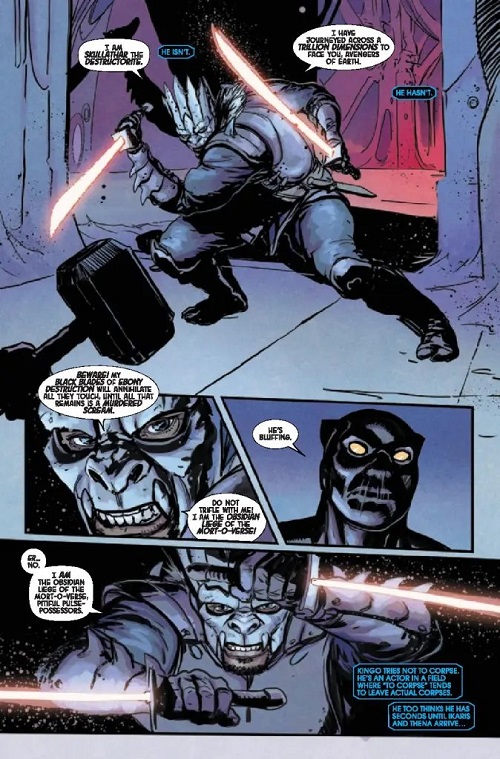 And you can read the rest of the preview here.

It’s available from all comic shops, digital or otherwise. 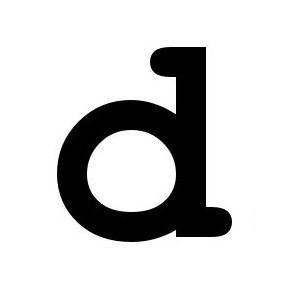 Decompressed is back, at least for a while.

Decompressed is my sporadic (i.e. 5 years absent) comics craft podcast. Prompted by being embedded in the X-office, I figured interviewing as many folks as I could manage could be a useful capsule of a moment in X-comics history – and also, I’m aware that a ritualised way to talk comics to human beings is something I need right now.

The first went up last week, where I talked to Steve Orlando about Marauders #1.

The second has just been published, and I’m talking to Al Ewing about X-men red #1.

Its RSS is here and you can find it on Spotify here.

I’ve got 3 edited, and by the time you read this, I’ll just be about to get on a call with Ben to get three more in the can.

I’m not sure which order they’ll be coming out – it depends upon the exact release dates for the issues, which are somewhat in flux, for the whole industry. The supply chains, they’re neither supplying or chaining.

The Hugos shortlists have been announced. And in Best Graphic Story Or Comic… 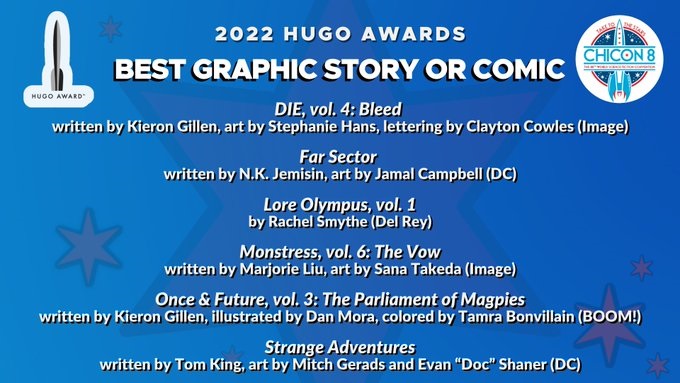 Cripes. That’s three years in a row that I’ve had two books I’ve work on nominated – WicDiv and DIE in 2020, DIE and O&F in 2021 and now DIE and O&F in 2022. The Hugos are an award that that’s simultaneously prestigious and outside the normal areas of comic chat means that this is a real surprise and delight. Thanks to everyone who has nominated us into an excellent field.

I’ve got a little behind on Solicitations. Let’s try and wrap some stuff up – here’s the ones for June and here’s the overview of what issues are tying into Judgment Day in July, the big ol’ event I’m writing. 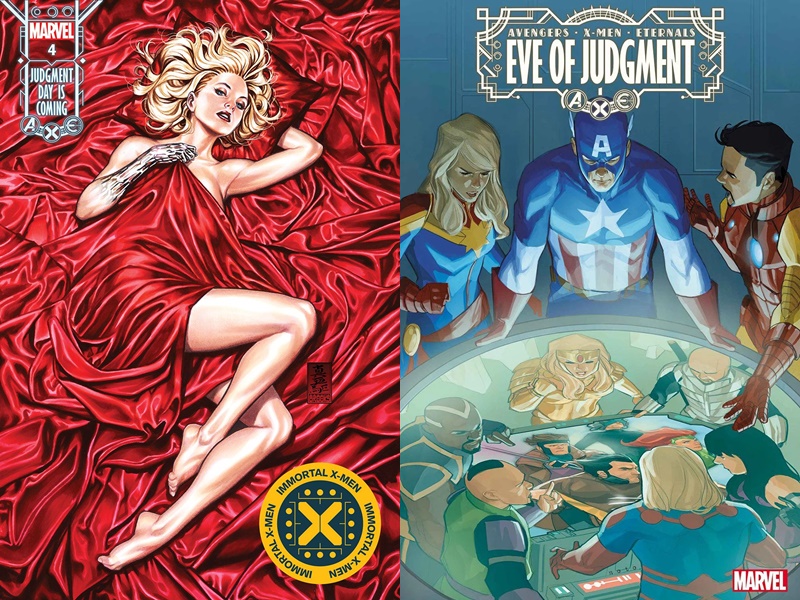 You’ll note there’s no Eternals in the schedule here – Eve of Judgment is basically that, and if you’re following on from Eternals 12, this is where to go next. It’s also a clean jump on point. 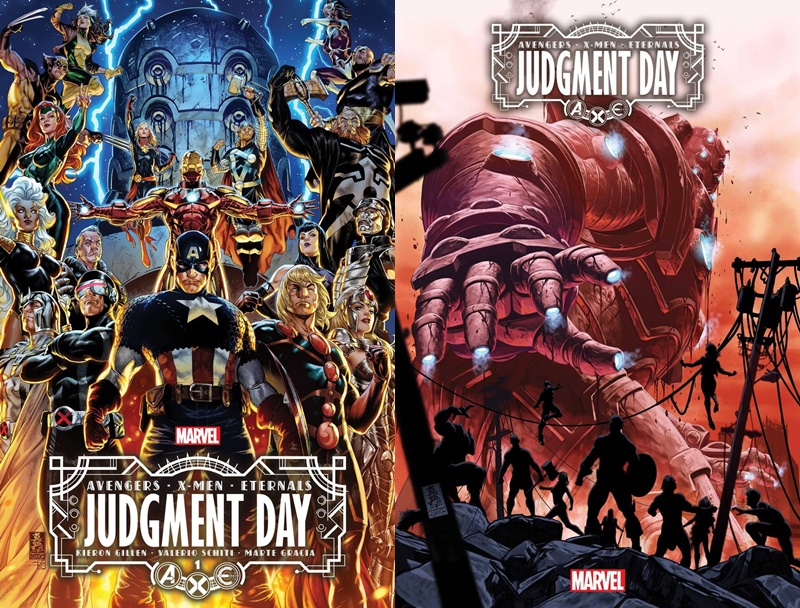 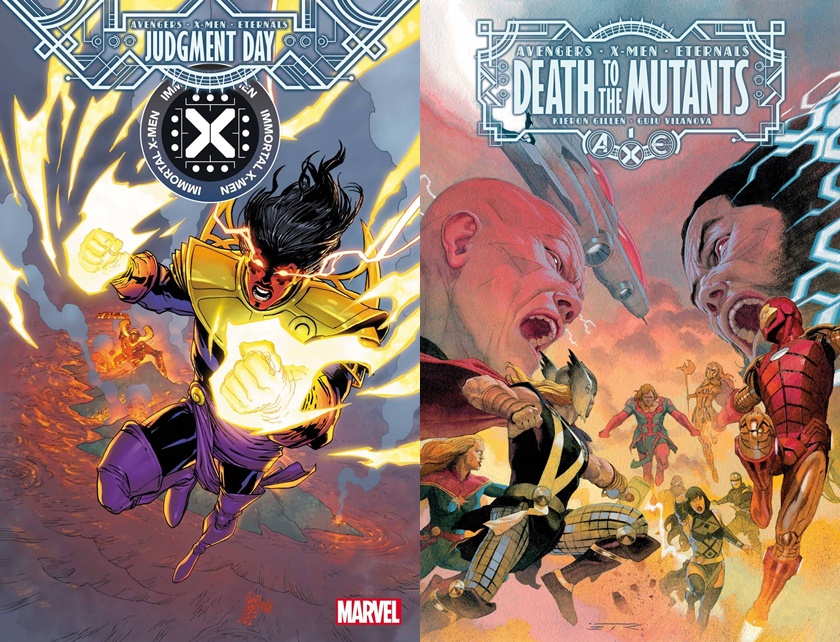 Two of my books tie-in. Covers by Giuseppe Camuncoli and Esad Ribic, respectively. Immortal X-men 5 with Michele focuses on Exodus, and (er) what’s going on in Judgment Day from the mutant perspective. Death To The Mutants #1 has Guiu Vilanova rejoining me after our fun on Eternals, and is the Eternal perspective on the conflict.

That’s broadly act 1 of the story, before exploding into Act 2 in September.

Oh – Marvel has done a list of the event, with all the books which tie in… 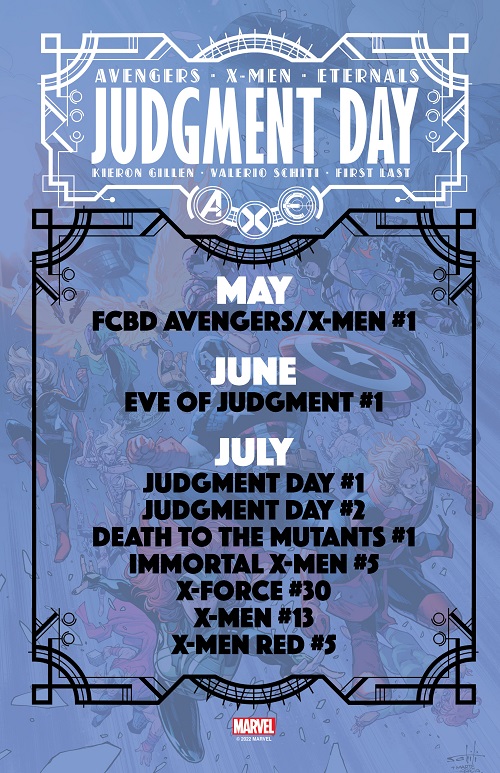 …which is fun. I just read the script of Al’s X-men Red #5, and I’m just delighted and horrified by what he brings to the table with it.

Last year, I went to Meanwhile… con in Coventry. At the drink and draw, I doodled this, and posted it on Instagram… 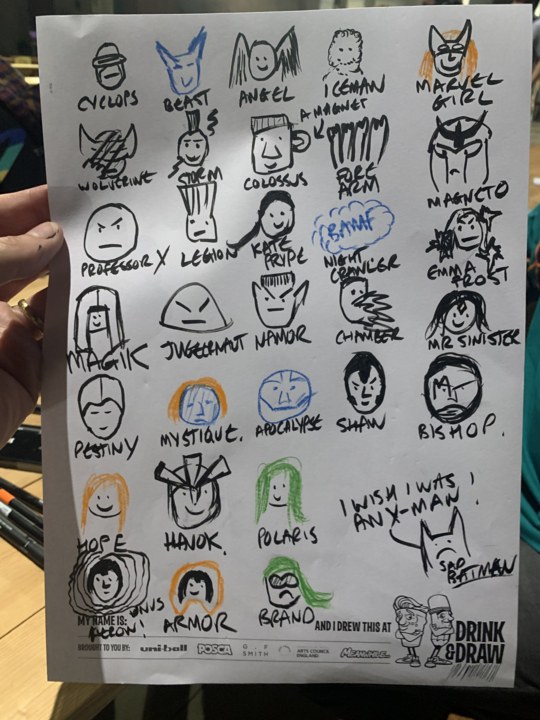 …and then I realised that due to Destiny being in there, someone may decide it’s literally me saying Destiny is an X-man, and so spoil the forthcoming Inferno. This led me to legging it from the venue back to the hotel so I could delete it from all the places it autoposted, because this would be a foolish way to spoil it all, right? I’d find myself murdered with a sharpened graph, I’m sure.

Anyway – I’m reminded of it this week, and figure I can share now. Yes, I have an awe-inspiring talent, I know.

The Immortal Launch week took over my brain as much as I suspected it would, which has made me engage circuit breakers. Spending a couple of hours sleeplessly thinking over answers to questions isn’t exactly something that’s healthy or even useful at the best of times, and doubly so when I’ve got childcare to be getting on with. To reduce the level of random input that gets the old noggin’ chewing things over, I’ve deleted twitter off my tablet and phone, which has helped. If I’m not as responsive as usual there, you know why. Also I’ve been careful of what to read or listen to as I head to bed. Anything which feels like work is out, as my brain needs sedatives then, not fuel.

Otherwise, time passes. Last week wasn’t quite a write off for work, but was in terms of new script. My macbook’s screen died, meaning I had to send it off for repairs. This means I’m working on my inside big PC tower, which has a lot more distractions. With my macbook back and heading away from the internet to the office shed, I think I managed to write more pages in two hours on Monday than I did all last week. Intensity of concentration really does matter.

That said, it’s not as if nothing got done last week either – it’s just that the work was more diffuse. There was a lot of staying on top of various tasks, like lettering drafts. Eternals 12 went to the printer, for example. Immortal X-men 3 is going through lettering, and I had to spend a chunk of time working out how on earth to explain its datapage to Clayton. AXE: Eve of Judgment got a lettering draft too. I think there was an O&F one? Odds and ends. I’m certainly passing through a place where there’s a lot of smaller work which can fill a day if I let it. This is why carving space to actually write new stuff is so important.

The pages I did manage to do (apart from a montage sequence for AXE 4 I wrote after I handed the full script in) were breaking ground on O&F 28. I’ve decided to move on from that this week, jumping over to Death To Mutants 2, before returning to O&F 28 and then… AXE 5, I think? That’s the one I’m really looking forward to, to the degree that I almost jumped to it before DtM2 and O&F28. But I’m in a place where making sure all the artists are fed safely has to be key. I think I said last time that I did what I hate to do (and artists hate to get) of giving an artist 5 pages before sending the rest of the issue. It’s a self-contained sequence, so not as bad as it can be, but still far from ideal. My goal right now is to make sure it doesn’t happen again. And I’m also aware that’s a really good reason to get ahead and write AXE 5, as when that’s completely nailed down, it almost dictates what my various tie-ins are going to do.

Yes, I really do want to write AXE 5.

(I’m also interested in how writing the various books is different. AXE is machine-engineered, as a supporting pillar of the Marvel Universe has to be. DtM is more like a process of discovery. With a cast that I’ve build – and a few more I’m introducing – I work out the cuts on the page, finding the best way to journey through the material. I’m enjoying it, but I’m unsure if I could convincingly explain my methodology to anyone else. Perhaps that’s part of the point.)

Okay – this has all been pretty dry. On the more human side, I did manage to get out to the Waterstones Image event, which was just healing. It was good to see people I knew, but also there was the moment when I saw new people in the crowd. When I spoke to them, it was clear some of them entered comics during lockdown, and this is one of their first steps into comics culture. On the panel, Zoe Thorogood was talking about the last time we did an Image panel, 3 years ago, when she was in the audience. She’d been to one con with her portfolio, and Alison Sampson had said she should come to the panel. She did, talked to some folks, and came along to the pub afterwards. She came out from the evening on fire with wanting! To! Do! Comics! Cue the wonderful THE IMPENDING BLINDNESS OF BILLY SCOTT, and now the just announced IT’S LONELY AT THE CENTER OF THE EARTH at Image. That’s amazing to think about, and fills me with joy.

So all that is good and useful, and I need to find more of that in my life. The next thing similar should be FCBD, which I’ve said I’d do a signing for. Hopefully see some folks there.

You just read issue #215 of Kieron Gillen's Wordmail. You can also browse the full archives of this newsletter.