212: Alan Moore's been crashing over at mine 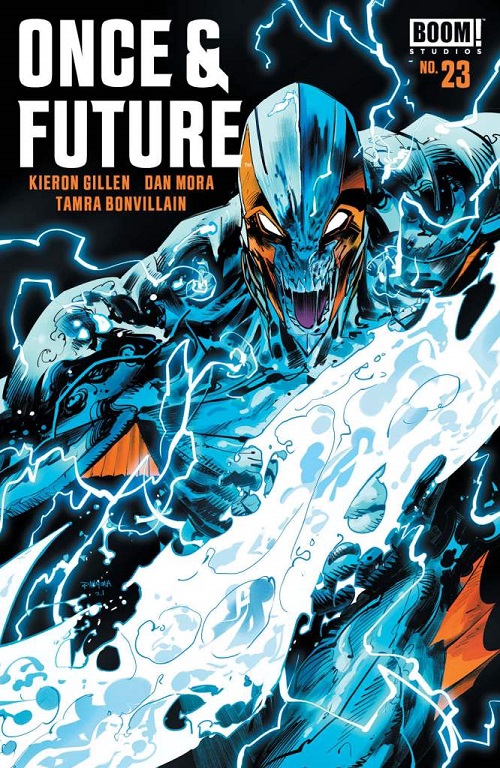 Last comic of the year, and one I hadn’t quite realised was this month. The vagaries of schedules mean that we got out Once & Future 22 out on December 1st so snuck this one in here. Which is rare, but also gives a chance to do a proper end of the year. I like having a book out in this week as much as I like having one in the first of January.

Once & Future has been just a source of pure weird joy this year. Working with Dan, Tamra and Ed and seeing exactly how they respond to each script, which then feeds back into the next one is exactly the sort of virtuous creative circle I need more of my life. Thanks to them for it, and thanks for you lot for reading.

Anyway, it’s accidentally seasonal, as it involves close relatives shouting at each other and threatening violence. Here’s the the first two pages of the preview… 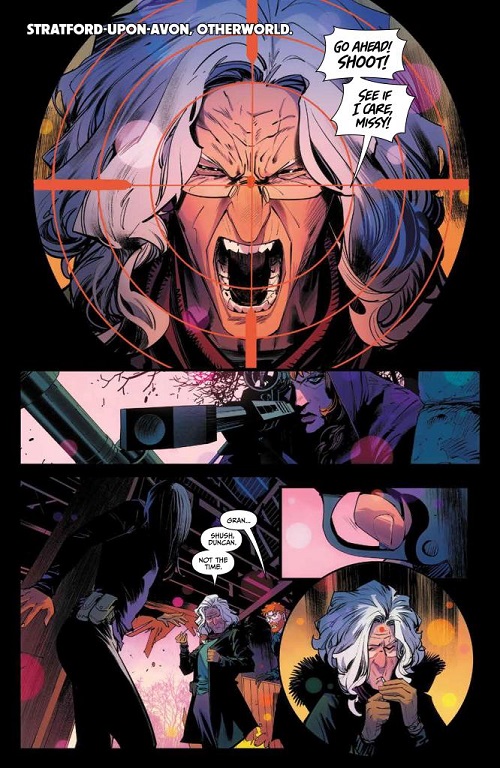 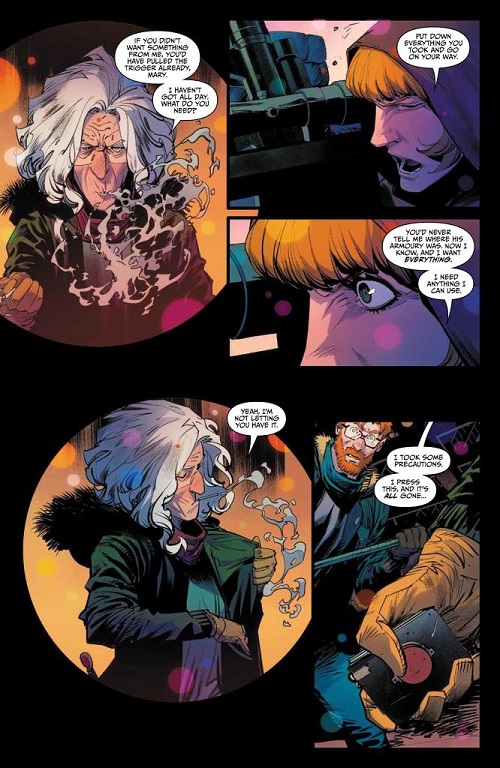 And you can read the rest of the preview here..

You can buy from your comic shop or digitally.

Just before Christmas I heard the terrible news of artist Ryan Bodenheim’s passing.

I had only just started working with Ryan but this hit me hard and I can only imagine what those who were close to him are feeling. We were about ¾ through the Eternals special we’re doing together. I’ve always admired his work, – especially his collaborations with Jonathan Hickman, who writes about him here - but being close to it is something else. His design work in the issue was especially astounding – what he did with Uranos is so smart, scary and beautiful – and I had started to think of what could be fun to suggest doing in the future. That disappeared, in a monment, and you’re left grasping and unmoored. That’s the smallest part of the future, of someone who had just met him. That only leaves you thinking of the enormity of the loss for his loved ones.

The obituary suggests that in lieu of flowers, donations be made to the Hero Initiative or the charity of your choice in his name.

I’m unsure what’s happening with the issue, and will let folks know when I do know. 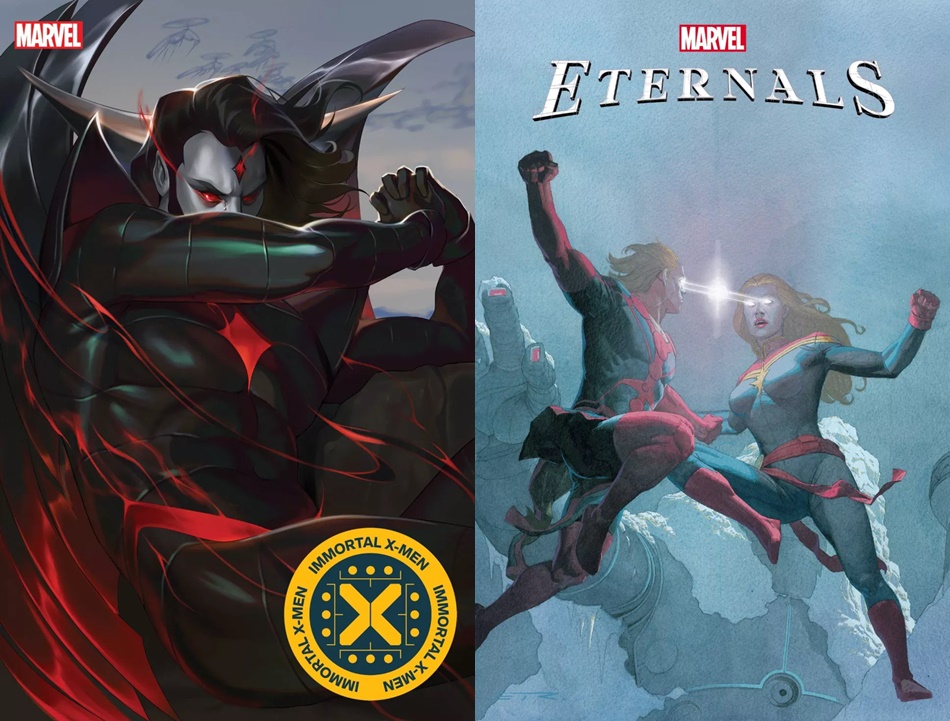 Marvel Solicitations for March are up. Including the launch of Immortal X-men and the mid-arc change of direction for Eternals…

IMMORTAL X-MEN #1 Kieron Gillen (W) • Lucas Werneck (A) • Cover by Mark Brooks IN THE QUIET COUNCIL, NO ONE CAN HEAR YOU SCREAM! The Quiet Council rules the Krakoan age, for better… or worse. Now, shaken by INFERNO and X LIVES / X DEATHS OF WOLVERINE they strive to hold together, no matter how much they want to tear each other apart. Writer Kieron Gillen (UNCANNY X-MEN, ETERNALS, The Wicked + The Divine, Die) returns to the world of X with artist Lucas Werneck (TRIAL OF MAGNETO) to bring us all into the room where it happens. “It” being “the most powerful people on Earth deciding the fate of the whole planet.” Prepare for sinister secrets to be revealed and learn that some secrets are more sinister than others… 48 PGS./Rated T+ …$5.99

ETERNALS #10 KIERON GILLEN (W) • ESAD RIBIC (A/C) • Variant Cover by RIAN GONZALES The Eternals are on a pilgrimage together. Well, depends on who you ask — for it’s not so much a pilgrimage…and more like breaking and entering into Avengers Mountain. But what the Avengers don’t know won’t hurt them…right? 32 PGS./Rated T+ …$3.99

I smile at how completely Mark is going for the catholic art-history take for covers for Immortal. I swear, it’s all his idea, even though it’s absolutely my jam.

Also, McKelvie’s writing something else… 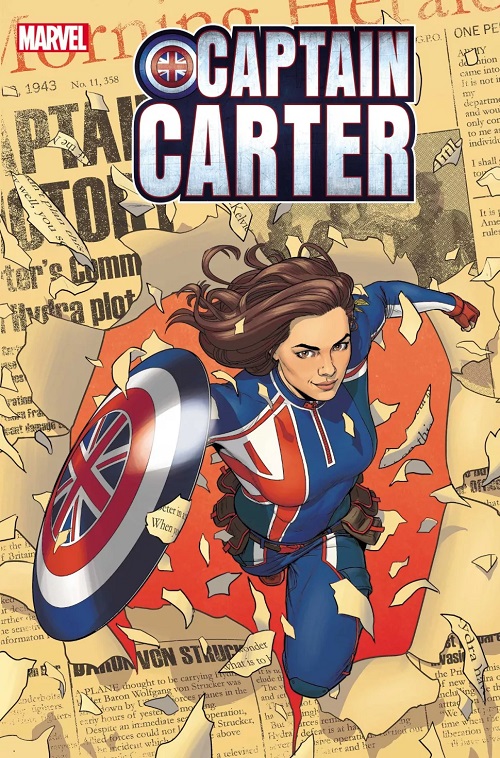 CAPTAIN CARTER #1 (OF 5) JAMIE MCKELVIE (W) • MARIKA CRESTA (A) Cover by JAMIE MCKELVIE WOMAN OUT OF TIME? A reality where Agent Peggy Carter took the Super-Soldier Serum is turned upside down when the World War II hero is pulled from the ice where she was lost in action decades before. Peggy struggles to find her footing in a modern world that’s gotten a lot more complicated – cities are louder, technology is smarter and enemies wear friendly faces. Everyone with an agenda wants Captain Carter on their side, but what does Peggy want? And will she have time to figure it out when mysterious forces are already gunning for her? Prolific comics creator and designer Jamie McKelvie teams with rising star Marika Cresta to tell an unforgettable Captain Carter story for a modern age. 32 PGS./Rated T+ …$3.99

I’m excited what he’s doing here. I also wonder how much working with me has rubbed off, in terms of doing far too much research. He’s working with some dynamite material here and I can’t wait to read it. 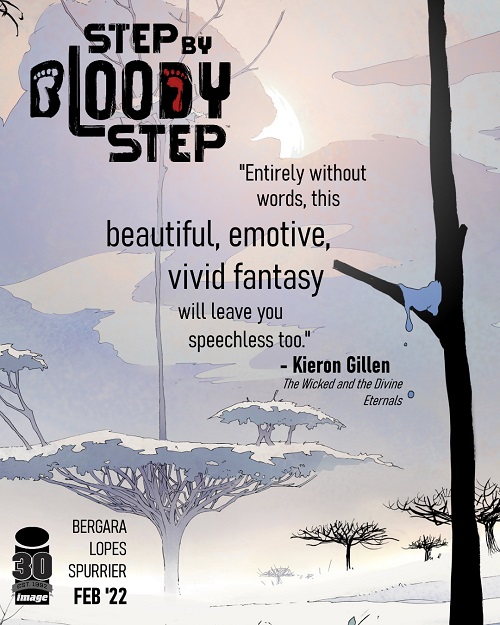 Coda was astounding, so to see the team together and doing something really striking is great. Out in February. Speak to your retailer.

We’re having a complete move around of the house over Christmas. As such, I’ve had to clear out my office, which has led to uncovering all manner of stuff. I found this in a box of flock for miniature bases. 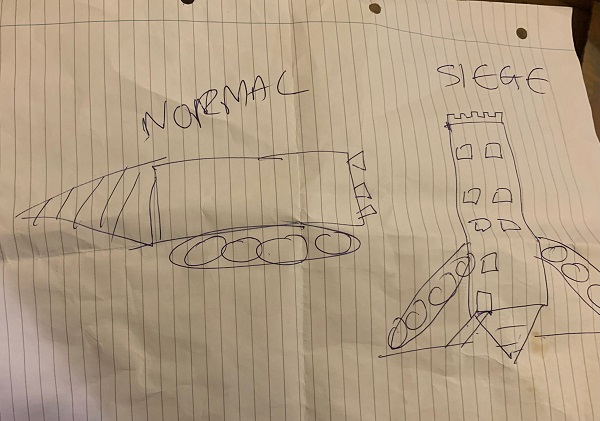 Which is my original scribbled design for the Delving Fleet in the Shu-Torun war in Darth Vader. Here’s what Salva did with it…

A convention I’m fond of in RPGs is a reading list. It goes back to the Appendix N in the first days of D&D, which listed the books which influenced the game. In modern times, it’s moved into wider cultural influences. Films, TV shows, music, whatever. I’ve been compiling DIE’s one randomly as I’ve been working on it, just lobbing things which struck me as having something to say for DIE.

I lobbed on two things this week. One was a Christmas Carol. The other was Archaic Torso of Apollo by Rilkewhich struck me as I was heading to bed last night.

Here it is, as it’s very much an end of year poem too. 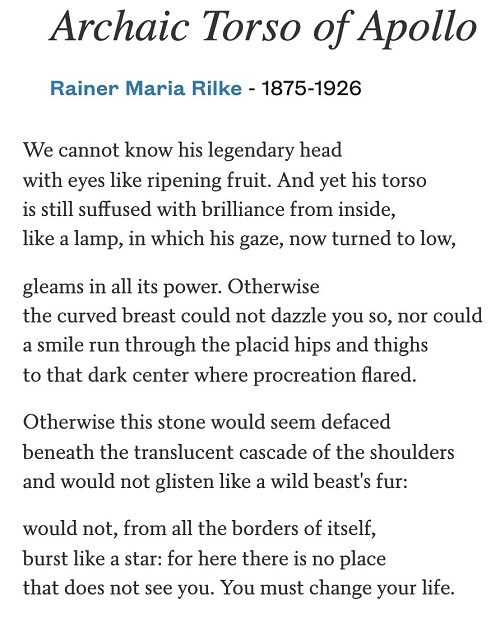 I’m not doing no work entirely in this week, not least because “Entirely re-arranging our working spaces” is work. I’ve been chewing over the one-off comic I talked about previously. The artist is lined up, and I plan to get at least the first part of it over to him on New Years Day. It’s going to be divided into 3 8 page chapters, and I’m pretty sure I can do at least one. I’ve got a few pages of notes, and an obsessive listening playlist. It’s very much me stretching certain pre-professional comics career muscles, elements which only really got to show themselves in The Singles Club. I really have no idea what it’s going to be like. Hopefully, it’ll be emotional. It’ll also be the first thing I start to write in the new house addition – we’ve got a work shed. Yes fancy. We’re keeping it as a hot desk environment, so it’s little more than a table, lights and a chair, no wifi. Seeing if it effects the work is going to be interesting. At the least, it’s going to be a prettier view than starring at a row of book and some badly daubed Skaven.

The rush towards Christmas was mainly tying off a couple of synopsis. One sets me up to basically spend January writing a good chunk of a mini I’m doing. The other is getting basically everything of DIE over to RRD, where January will be working and re-arranging that. There’s.... one new thing I need to write, which is basically a new quick-to-table one-session thing (DIE SAWN-OFF being its working title, but THE DEATH OF THE PARTY is perhaps the scenario name). I also need to draw together the various Master material into its chapter – the Master is the enigma in terms of how to present it but I’ll talk about that down the line. Oh – and I also finished the second full DIE campaign last night, which worked really well, and was appropriately emotional. That it’s the last gaming of the year seems appropriate. It’s a sign off to an emotional year, which was hellish but made endurable by those around us.

You know – the weird disconnect between what newsletter Buttondown think this is and what newsletter it is now bugs me enough that my first big move for 2022 will be just re-numbering them to be the same. That I released a 210 twice is a clue that at the very least, it’s confusing for me. So expect the numbering to go back a couple next time, in a hot new look for 2022.

Oh – one more thing. Back in September, circa the X-office Summt, the Ben Percy lobbed this photo online. 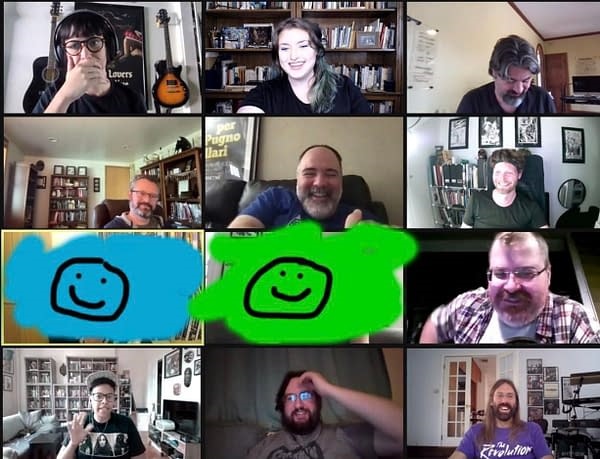 Which Internet sleuths recognised the background behind the green face as my office.

“Weird week! Alan Moore’s been crashing over at mine. It’s been nice to have him, but he had to do some work here. He was holed up in my office for hours, doing zoom meetings. I wonder what it was about?”

Which I didn’t, because someone would have believed it, as the Internet is terrible.

See you in the future.

You just read issue #209 of Kieron Gillen's Wordmail. You can also browse the full archives of this newsletter.