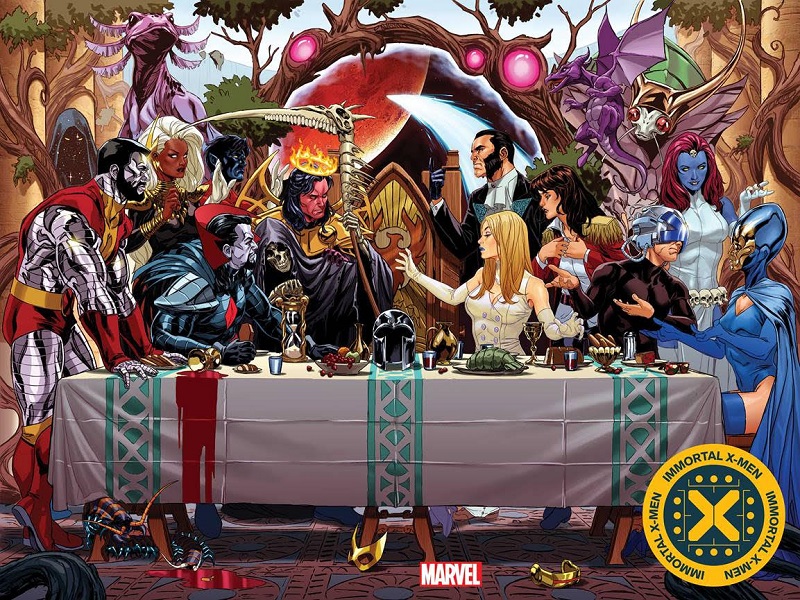 I mentioned I was doing another book at Marvel. Here it is.

It’s called Immortal X-men, with Lucas Werneck on interiors and Mark Brooks on Covers. It’s an ongoing. Well, it’s Immortal X-men, so that may be implied. “Ongoing, forever” is kinda one of the core things in the book.

IMMORTAL X-MEN will focus on the current leaders of mutantkind known as The Quiet Council in an X-Men series ripe with backstabbing, shady alliances, and chilling revelations that will put everything you thought you knew about Krakoa’s future into question! Already proven to be a master of the mutant mythos on books like UNCANNY X-MEN and GENERATION HOPE, Gillen makes his grand return to the franchise with an ambitious series unlike anything that’s come before in X-Men history. And fresh off his work on TRIAL OF MAGNETO, Lucas Werneck is ready to use his acclaimed talents to bring all the high-stakes action, heated clashes, and intense DRAMA to life in this first-of-its-kind X-Men title.

The Quiet Council rules the Krakoan age, for better… or worse. Now, shaken by INFERNO and X LIVES OF WOLVERINE/X DEATHS OF WOLVERINE, they strive to hold together—no matter how much they want to tear each other apart. Take a seat in the room where it happens. “It” being “the most powerful people on Earth deciding the fate of the whole planet.” Prepare for sinister secrets to be revealed and learn that some secrets are more sinister than others…

And you can read the rest of the press-release here.

It includes a selection of the things I mailed Marvel when they asked for a quick quote.

I decided to interpret the phrase “quick” liberally. Full version…

Obviously, I was delighted when I heard that Jon was leaving the X-office, due to our ancient rivalry. It’s a complicated story, and involves several duels, all of which I lost. Suffice to say, I have sworn to never enter any office where he is present. When news reached me he was leaving, I realised it was time to sneak in the back door. For a good month or two, I was lurking around pretending to be Jonathan. I donned a disguise (a wig, a different accent, a series of gnomic diagrams as my zoom background) and sort of hung around, making pronouncements. I have since learned everyone realised it was me immediately, but felt so bad for me they decided I could stay.

This speaks to what a lovely place the X-office is, now that Jon has left. In fact, it’s mildly annoying to know that this wonderful, supportive environment for creators has gerinated around thrice-damned Jon’s foundations. It’s unlike anywhere I’ve been during my time in Work-For-Hire comics, half-gang, half symposium. I find myself thinking in many ways the X-Office’s set-up mirrors the comics itself. The X-men are about the new, and this feels like a petri dish, pushing towards the future of comics. And I hate to admit it - I really do, like Doctor Doom having to say “nice one!” to Reed - Jon’s climax of Inferno has started a thousand fires in the office.

So, the match is lit, and IMMORTAL X-MEN is a book about the burning. To speak in a Hickmanian idiom, this is the New Avengers to Gerry’s Avengers. This is the book about Krakoa, and the Quiet council, with all its muffled screams. It’s about a group of people, some of whom are convinced they’re in the West Wing, some who have designs to be in House of Cards and at least one who knows they’re in Veep. It’s big ideas, politics, fights and fashion, lies, creation and destruction, all told across the widest possible canvas, in time and space. It’s some characters I’ve written before, with the volume turned up. It’s me falling in love with some characters I’ve never touched. It’s me somehow talking Marvel into paying me for having this much fun. .

Returning to the Inferno nod, Lucas Werneck is basically fire on the page. He’s someone who absolutely nails the tone of the book. When we do quiet and real, the characters have so much charisma it feels like stars are on the page. When we do big and impossible, he makes it real, and takes your breath away. Mark Brooks on covers is another treat. His gifts in creating form and charisma are obvious, but he’s throwing ideas at the page with a huge velocity. People are going to be poring over his first cover like it’s a piece of art at the heart of a conspiracy, as if every line means something. Which is lucky, because it does.

TL;DR: I am very happy to be in the X-office, please can I stay a while, I will write comics.

As it’s early, I don’t really want to say many specifics, not least as I don’t want to give away any hints at what happens at the end of Inferno. I’ll be doing interviews shortly, and I’ll be more specific about the identities of my core cast, though there’s names in the press release. For now let’s keep it to “The Quiet Council.”

Immortal X-men is part of Destiny of X, the name of the line’s new direction. Leinil Francis Yu and Sunny Gho did a teaser piece, which gives you a taste. 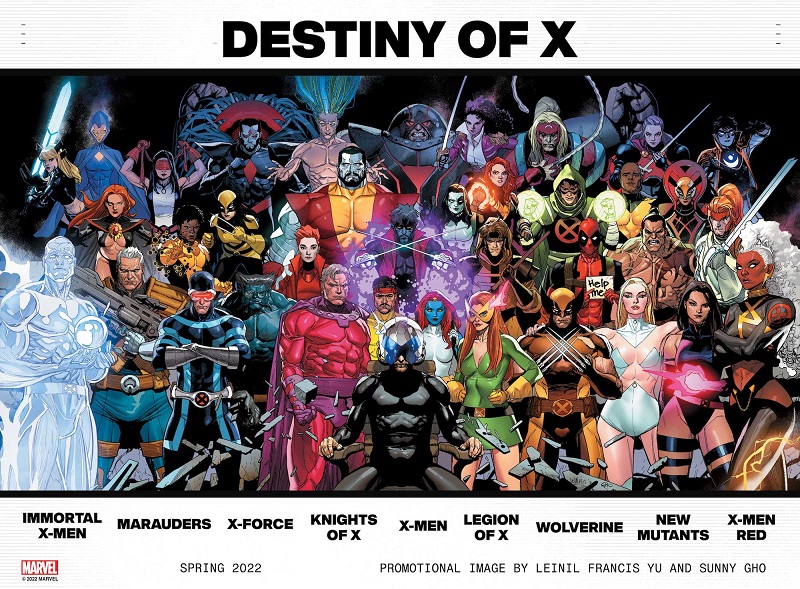 As it’s the first book out in Destiny of X, I’m keeping several eyes on making sure it’s as clean an entry point as possible. Even for people who’ve been following the X-line since House of X and Powers of X, a reminder of where we are is likely useful. Immortal X-men, being about Krakoa, and for it to be meaningful, one must know what that means, and what’s at stake.

And if you’re talking about beings who are immortal, that means “Everything, forever.”

I’ve got a lot more to say about this, but I’m going to shut up for now, so there’s stuff to talk about later. I almost just said the main formalist device of the series, and that serves no-one. I think you’ll like it. The X characters remain a delight to me, and I hope I’ll share that glee with you too.

Oh, I’ll give you this: here’s my playlist. It’s a working one, so will likely change as I progress, but speaks to a lot of the book’s aesthetic. 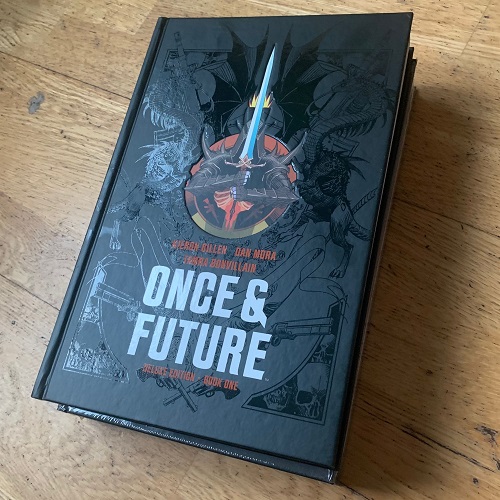 An update on the Once & Future hardcovers. Last week I said that while the edition without the slipcase had been released, the one with the slipcase had been delayed until next year. This was the original plan, but I’ve been told that things have changed. Essentially the first wave of slipcase books were already with the distributor, and so heading out in the world and impossible to recall. As such, Boom has moved to a two wave system. Retailers got to set their orders for the second wave on December 6th, and will be with folks on April 27th. If you want one, talk to your retailer. It’s too late to hit FOC, but they may still want the diamond code anyway, which is OCT218494.

Chrissy sent me this photo this morning. 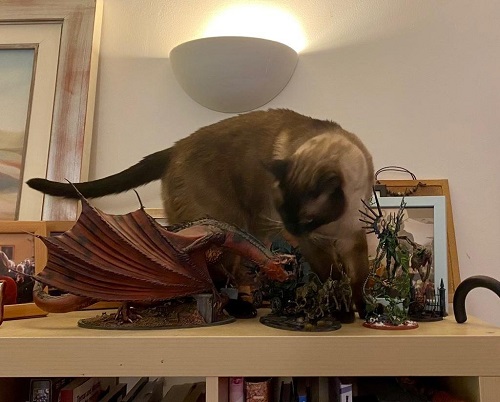 I like that Smaug is determinedly avoiding eye contact with Manny, as he knows how it would go down.

I was going to sign off by saying life is a lot like that photo, and leave it for wild interpretation. It wouldn’t be true. The world is a lot better painted than my miniatures. In truth, it’s been actually a nice week. There’s a lot going on, and a lot of pressure, but – on a personal and work level - it’s all basically under an umbrella of “good”. The notes on the two things I were waiting for were entirely reasonable. I made good progress on the DIE RPG stuff I wanted to do – I may do a little preview thing next week. I played a couple of interesting new games - The Haunting on Holly Street’s two-player ghost-mystery and The Thief and the Necromancer, all of which are absolutely scandalous in their formalist playfulness. I found a bunch of neat music. We had a weekend with friends, in a proto-Christmas of boardgame and food joy. And as I’ve got synopsis of O&F until issue 30, I’ve just started working my way through them.

But it is a lot, so I better get back to it.

You just read issue #207 of Kieron Gillen's Wordmail. You can also browse the full archives of this newsletter.