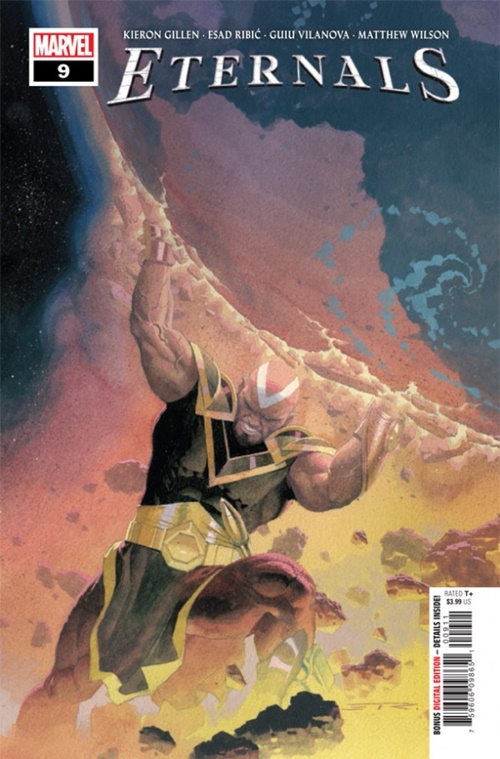 Eternals comes back, and after two issues of politics we have an issue of war, with all the horror that Esad, Matt and Clayton can bring to the page. However, it’s not just us this time. Due to schedule tightness, Guiu Villanova jumped aboard for a core sequence. He comes onto it, and does amazing work with a powerful scene. He’s rejoining us in issue 11, so I’m looking forward to see what he does with that too.

I don’ think there’s much more to say about the issue, bar I’m getting my bleak on again.

Multiversity had the issue preview, which starts like this… 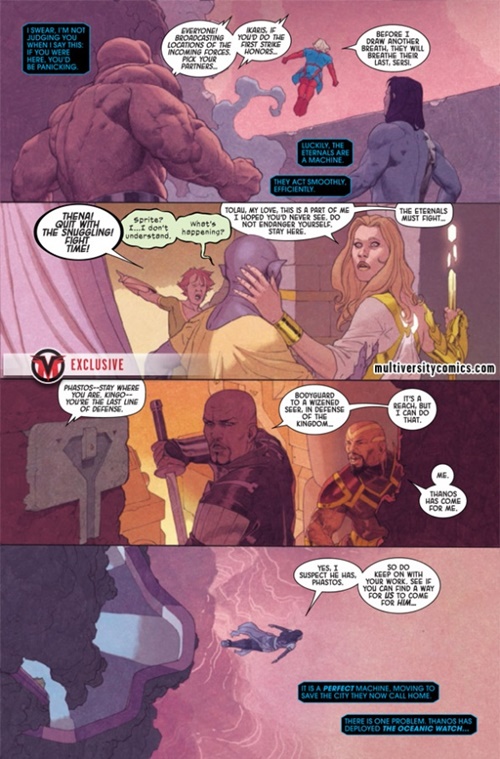 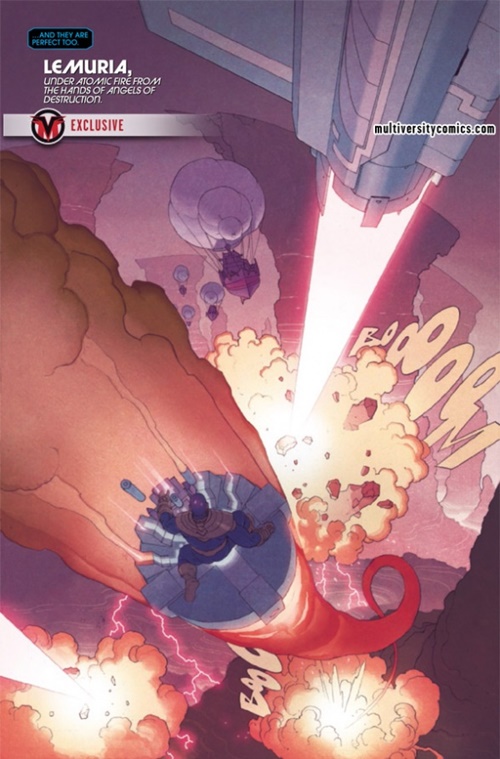 …and you can read the rest here, and it’s available to buy both physically and digitally.

Immortal X-men is getting ever closer, and I did my first long form text interview with CBR. I was worried about being a little frazzled, but I’m told I come across okay. Here’s a quote…

I wish I could talk more about the first issue. I’m very happy with it because it illustrates the pitch and says, “This is what the book’s about.” We’ve got politics, voting over something incredibly high stakes. We’ve got some big plays, somebody tripping up, and a big, “Oh my god they’re doing that!” reveal, and then another one. There are also explosions. It’s not just people sitting around a table and voting. This is still a glorious, high sheen – Lucas [Werneck] does superhero action books. It’s the other side as well though. It’s also about how do we make the Quiet Council glamorous?

It’s like when you’re watching Succession. That show looks great. I hadn’t watched it until well after I started on Immortal X-Men and Eternals. Both these books though, at times, feel very much in the mood of Succession. I started watching it about two months ago and it’s like, “This is a comedy/drama about awful people in a political situation.” Also to be fair, the X-Men are considerably better people than the characters of Succession [laughs] – except for Sinister, and a few others. They have that kind of energy.

To illustrate my point, here’s some teaser Lucas art – here’s one from the opening flashback in issue one… 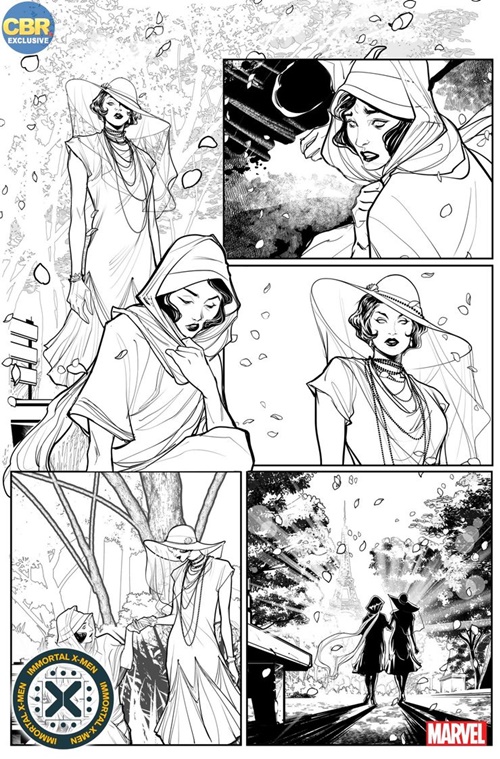 …whose Irene and Raven period looks say everything, right? Glam!

Oh – let’s do another link to the Immortal X-men playlist. I’ll probably try and write a little more about it nearer the time. It’s certainly got a mood.

The April Previews are starting to come out. At the time of writing Immortal 2 hasn’t been solicited, but Eternals 11 has been revealed… 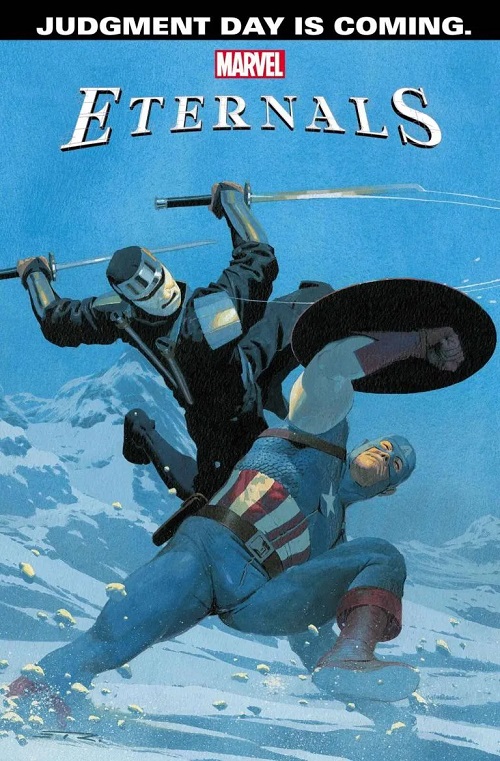 The first newsletter in the new year is the one I try to get my tracks of the year in for the previous year and warm up the critical download cannon to justify launching them into my personal canon. I won’t be doing that this time – I don’t have the time, and looking at my schedule shows I can’t guarantee that I’ll have time for months to come.

As such, I’ve pulled together a quick playlist of 2021-or-2020-and-good-enough-to-make-me-go-fuck-it-ish things which immediately jumped out of my scratchlist of stuff. This is not in order, and even less exhaustive than normal. But this is some new stuff that caught my ear…

They really are not in an order. I made sure we started and ended with bangers, of different sorts, but the rest are just thrown randomly. Actually, for form’s sake, let’s choose one to have a nice TRACK OF THE YEAR hat. Let’s say it’s the last one in the list.

My only disappointment is I’ve seen them without the hats. They should have committed Daft Punk style to the bit.

In reality, my backbone has been obsession over the playlists of the projects I’m working on (The DIE and Immortal Playlists dominate my “most listened to” stats). I’ve also had significant input from working in the X-office – Al, Tini and (especially) Leah has introduced me to a bunch of excellent stuff. I’ve been going back and exploring things I’ve missed. I’ve always had a weird tendency to not really try to listen to things from 2-4 years ago, and I’ve relaxed that. I’ve also gone way back and had deep dives on bands that I didn’t have an educated take on, and I wanted to put more meat on it – or giving an actual real listen to bands I’ve always had a problem with. Hell, I even gave the Doors another go.

(That was born to a bunch Love, and thinking about their position as The Band in LA switched, and thinking how that would have felt.)

My 2020 dive into the Hold Steady only continued and deepened, and I found myself chewing over why on earth I found myself so drawn to them. I couldn’t think of a white-very-“male “-rock band I’d felt as much since the Afghan Whigs. The obvious took me a long time to grasp: they’re intensely catholic. Of course.

The relation between my catholic upbringing and the secular art I love has been on my mind a lot this year. Thinking about how Tolkien’s strange take on his Catholicism underpined his work has been on my mind too in a way that it hasn’t before. But we’ve moved off music and gone broader. That’s also fairly typical. If I had to capture a theme this year, it’s asking big, fundamental questions of myself. How? Why? What Now?

As I’ve said in interviews recently, I actively do feel more at peace than I have before, across several axis. Even anxiety is at peace – I recognise it for what it is, and have come to terms with that nagging uncomfortableness. It’s not the best place to be, but it’s certainly a better place to be, and may be the best place for me. I wouldn’t be at home if I was entirely comfortable.

As the above suggests, I’ve got a lot on. I did manage to have time off over the holidays, but it was planned time, knowing that I would be working intensely in January. Not punishing, but I’m in a place where I have firm goals for each day, and if I don’t hit them, a lot of things collapse. It’s going okay. I’ve always been good with non-negotiable deadlines.

I sent the story I wanted on Jan 1st. It’s a story for an anthology, the first of 3 parts. It was also the first thing I wrote in the work shed we’ve now got. It’s a hot desk set up, so C and I can use it, and it’s really working for me. There’s no internet down here, which removes about 90% of my procrastinations. If you lock me in a room with nothing but a word document, and words usually come out.

There’s another big change from having a space like this: it faces the garden. I get cats nuzzling at the window, and get to see the tiny birds hop in the branches. I don’t think it’s quite going to turn me from Saruman to Ragagast, but it has made me realise that I’ve spent the last 20 years looking at a wall when I looked up from the screen. The last time I worked at a building with a view was when I lived in central Bath, and I’d only get the view when I looked out the window. This is very different and I love it.

And I’m going to cut it off now. The schedule is as such that if I have to move off the newsletter onto starting to polish Immortal 4 in 42 minutes, I get behind, and if I get behind, I won’t be able to watch Taskmaster later.

Yes, my life is very soft.

You just read issue #210 of Kieron Gillen's Wordmail. You can also browse the full archives of this newsletter.