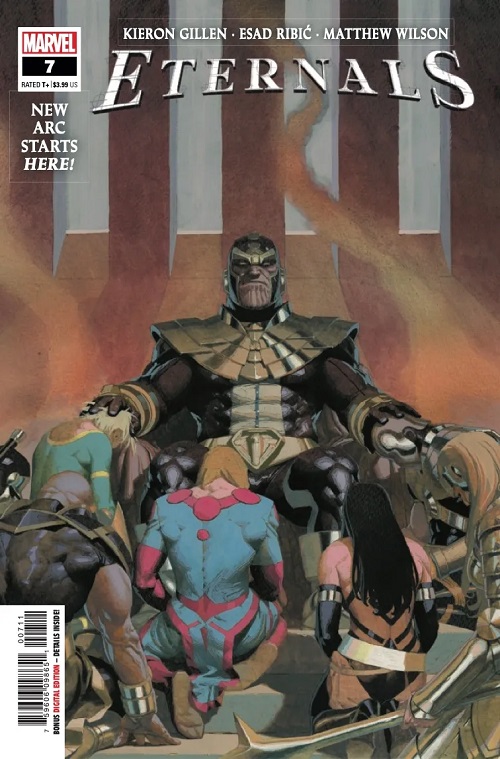 And after the specials, Eternals returns with our second arc – HAIL THANOS. Spoilers: it’s not about Thanos starting his own call-a-taxi Uber competitor. If the first arc was about the Eternals, the second brings the focus over to the Deviants, while moving on with everhything we’ve already set in motion. Lots of emotions, lots of politics, new characters and old favourites.

What do I like? Well, there’s a data page spread which is one of my favourites so far. There’s a typo in it, which is mildly annoying (“and then I grew silent” should be “and then she grew silent”) but it’s still the sort of thing I’m living for in this project. The page before the data page is also something I’m quietly pleased with – it’s not showy, but it shows how well the whole team is integrating now.

Anyway – that’s me. Hope you dig it too. Esad, Matt and Clayton are throwing so much at the page, and I’m delighted. First review here, which is spoiler free.. And here’s the first two pages… 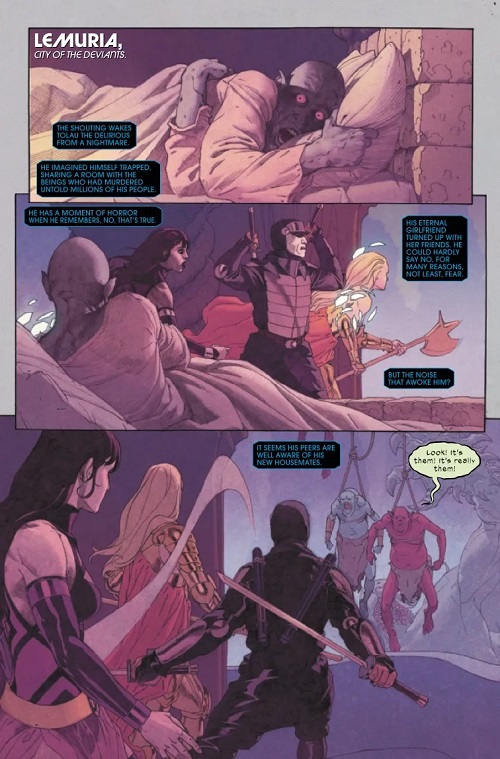 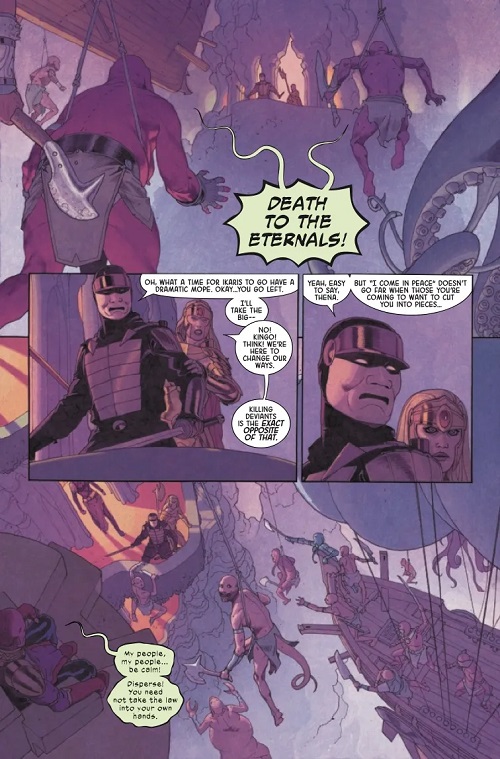 You can read the rest of the preview here, and but the whole thing from your local shop, or digitally. All our first arc is on Marvel Unlimited if you want to catch up – and the trade is also out there, and a handsome beast. It is an excellent Jumping On Point, as the marketing folk like to say. 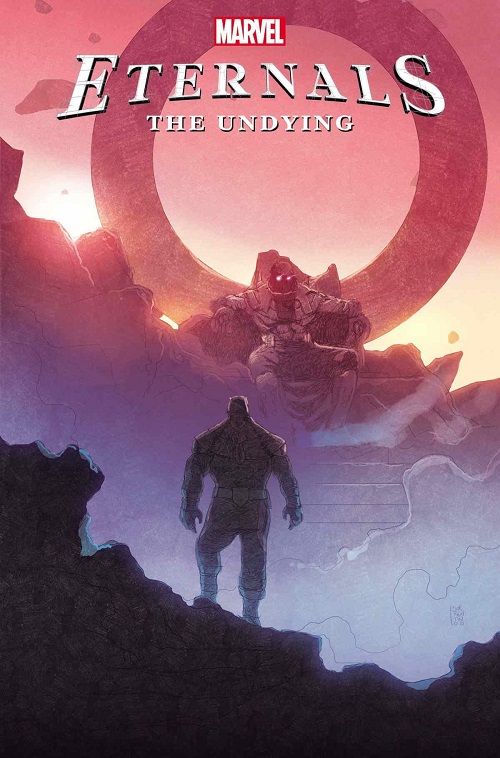 Also, on the Eternals front, the third special got announced. Eternals: the Undying is myself and Ryan Bodenheim doing something particularly bleak, with Andrea Sorrentino doing an astounding cover.

Here’s the quote I gave…

For a second, try and have sympathy with Thanos. He was born on Titan, to a family which he loathes and has nothing in common with. In our run, he arrives on Earth, and meets the rest of his extended family… and discovers that it’s the same thing, all over again. He has nothing in common with any of these people. How depressing for Thanos. And then he discovers… Uranos the Undying, Omnigenocidal Great Uncle, the rotting monstrous tree which Thanos’ apple barely fell from, proof that perhaps this capacity of horror does skip a generation. So it’s a happy ending for Thanos, really. Unhappy for everyone else, admittedly, but you can’t have everything. This is a story about some of the darkest periods in the Eternals saga, as two of the worst people in the Marvel Universe get to know each other. Less Meet Cute, more Meet Execute.

And, yes, you can imagine me cackling as I hammered out that last line.

As you’ve read two specials by now, you know what we’re doing with them. These are big, interesting parts of the mythology which actively impact the main story, given the focus they deserve. I’ve been teasing Uranos for the whole run in the main series, so getting a chance to properly introduce him is really exciting. Uranos is one of the characters who most intrigued me when researching Eternals – clearly hugely important to their mythology, but with only a handful of pages he’s even on. Trying to give a philosophical grounding to this void in the heart of the Eternals is absolutely my jam.

In my earliest notes, I described him as taking the place that Morgoth does in Middle-Earth’s mythology. Having finally started watching succession recently, I smiled, as I got another comparison. He’s the Marvel Universe’s Logan Roy.

I also love Ryan’s design for him, but we’ll get to that eventually. Ryan did some really smart stuff in the details, which were hugely inspiring for me in turn.

Out February! Read the rest of the piece here. 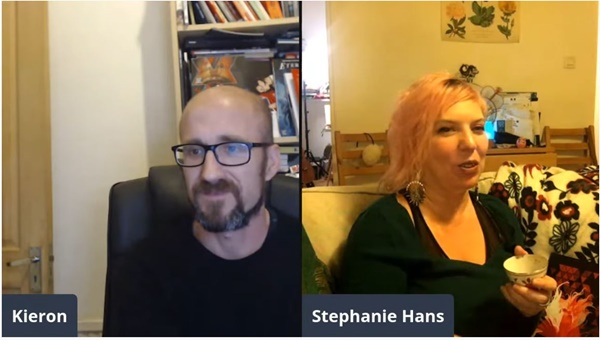 Stephanie and I did the livestream chat to celebrate the release of DIE Volume 4: BLEED and the conclusion of the journey, and it was very relaxed, lots of fun and frankly Too Much Information at times. I was surprised how open we both were about various aspects of the work and our lives. I mean, there’s always more, but I wasn’t expecting to be telling some of these stories.

You can watch the whole thing here.

Thought bubble this weekend, which may coalesce into some significant FOMO. It’s better I’m not there, but still. I’ll distract myself. 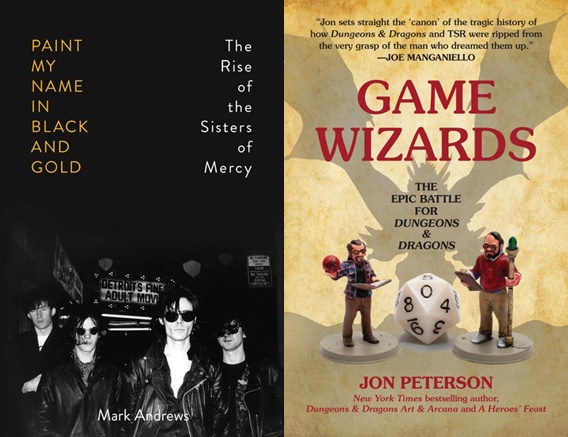 My thoughts have certainly been up North though. While Tbubz has moved from Leeds to Harrogate, I’ve been chewing over Leeds’ influence in the world due to reading Mark Andrews’ Paint My Name In Black And Gold which I supported on Unbound and I believe is available to buy this week. It’s a history of the first five years of the Sisters of Mercy’s existence. As much as I’m enjoying it, it’s basically the sort of micro-detail that I’m not sure I could unreservedly recommend to anyone other than myself and Ray Fawkes, and decoding the tangle of nicknames, actual names and nom-de plumes is a little like battling through the smoke at a sisters gig… but there’s still a lot that’s captured me, in how it’s summoned up that specific time. Even thought Eldritch is at a distance (there’s some quotes, but only some) you still get a sense of the weirdness of him as a rock figure, self-described as Elvis meets Kierkegaard, this deliberate, precise self-creation. The detail which sticks with me most so far is him constructing a tape-rack out of cigarettes and glue, like a craft project. That’s interesting. That says a lot about a person.

I also finished off by Jon Peterson’s Game Wizards which again positions him as the go-to games historian today. It wasn’t quite what I was expecting – the cover and the tagline (“The Epic Battle for Dungeons & Dragons”) made me think it’d be more about the conflict between Gygax and Arneson over the game (or “The Great War” as Arneson described it.) While that’s absolutely there, it’s more a corporate history of TSR until Gygax loses control of it (and D&D) in 1985. I wouldn’t recommend it as the first thing you read about this history, as there’s assumed knowledge about the origin of D&D, but once you’ve acquired that (any decent article will get you up to speed on Chainmail and Braunstein and the twin cities scene and all that) you should dive in.

At least some of this is being folded into my “Possible future of DIE” folder of stuff in my head. Speaking broadly, Gygax and Arneson seem to be mainly taken as Lee and Kirby - one the self-promotionist who got the credit and one as the actual genius who was cast aside. That’s never seemed fair, and even less so once you’ve walked the path in this book. You could have a workable drinking game based on “drink every time Arneson either doesn’t finish a project or hands in some assorted notes for someone else to turn into a full manuscript.” Before this, my take was a “Lee and Kirby, but if Kirby transferred all his work ethic to Lee” and that’s hardened significantly.

Hell, at the worst, I found myself thinking about the story almost all writers tell. Someone comes up to you and says “Hey – I’ve got a great idea for a novel. You write it, and we’ll split the money 50:50.” Everyone laughs. The point of the story is to underline how people don’t get it. Ideas are easy. The work is the work. Reading about Arneson and Gygax made me wonder that whether for once someone actually did have an idea that was good enough for a 50:50 split to be fair.

But that’s also not quite true – there’s an interesting push and pull in Arneson’s quotes between talking about how common role-playing was in the scene he came from, and the over-riding importance of the core novel idea. In the end, I had a lot of conversations over the nature of creativity coming off it, which is only right. Roleplaying games are conversations about creativity.

Worth stressing for those who know nothing of any of those people, that shouldn’t be taken as a defence of Gygax. Gygax’s sins are manifold, and described in precise detail. Yet at the same time, I suspect if you remove Gygax (or someone with his drive) and you remove D&D, and perhaps even the RPG itself. I think it’s unlikely, but the idea is there. This means there’s a link to Eldritch and the sisters upthread – the will to power aspect to Eldritch pushing to manifesting this idea for a band. Not through magical thinking , but through work. It’s not that assholes get things done, but in a creative exercise someone has to get stuff done.

Which is a cue to stop this and go back to Getting Stuff Done (while also knowing that the reason the newsletter gets done is that it’s also on the Getting Stuff Done list). It’s been a pretty good week for work – it’s intense, and I’ve been serving multiple masters, but big work has been done, people have liked it, and artists are at work. I’ve just had a bunch of first take designs for the new mini arrive in the inbox, and have delighted me, and have been everything I could have wished for. I’m at work at Once & Future 25 this week, while also plotting the rest of the arc. That’s been kind of magical. On Monday, I started writing a couple of scenes I wanted vaguely, and knowing they just felt wrong and aimless. I woke up on Tuesday, and on my run just did the mental surgery, moved the pieces around, and could see the shape of the issue just there. The trick was moving the prologue to the epilogue, leaning into some character work to give it heart and then integrating an incredibly lucky piece of etymology which turned up when I researched a key word. In other words, it was a case of start typing, and then working out why that’s wrong.

Writing is magic. The delete key is most magical of all.

You just read issue #205 of Kieron Gillen's Wordmail. You can also browse the full archives of this newsletter.