207: the seductive, awful joys of the flip 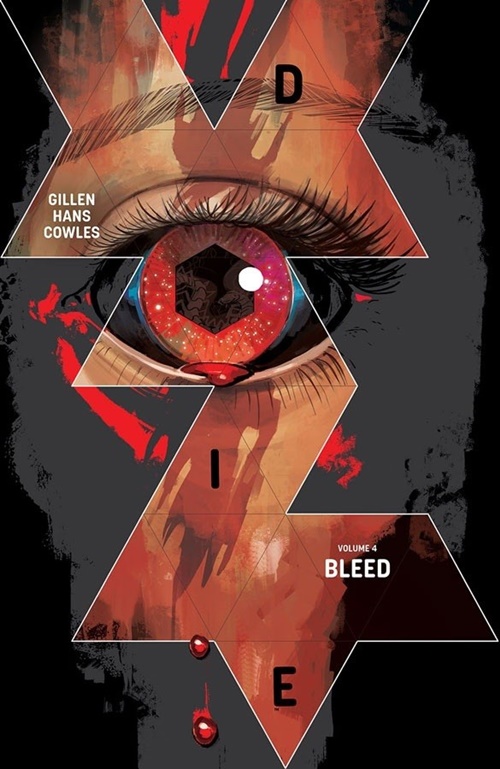 The fourth and final volume of DIE comes out today in comic shops. It normally comes out the week after in book shops – Amazon lists it for a week, for example. We’re pleased with it.

I did the full sniffling farewell and thanks when the last single issue dropped, but I’ll say DIE is big, dense, emotional, adult work which is a bunch of creators bringing everything they have to the page. The support we got from readers was overwhelming. I write at the back of the trade about how I was aware we were going to difficult places, at oblique angles, and the audience got it every time. Thank you.

As I am a little dehydrating I’m also remembering my fave line from Luke Haines’ sleevenotes to his Career So Far Retrospective… was it Das Capital? Or was it Luke Haines Is Dead? Anyway, he’s going through bigging himself up and scathingly insulting other bits, hits the soundtrack for Christie Malry’s Own Double Entry and casually notes “My Third Masterpiece.” That remains very funny.

People have asked about plans for a Hard cover. Nothing at the moment. The standard gap for an Image book going from trades to a fancier edition is 12-18 months, so I wouldn’t expect it immediately. Putting aside the world printing situation (which is something we can’t) we haven’t even talked about it at all.

In other words, this is the only edition for a while. As said, we’re really happy with it. Stephanie’s done some astounding work throughout, and the additional interstitial pencil sketches in the trade remain a dagger through the heart. 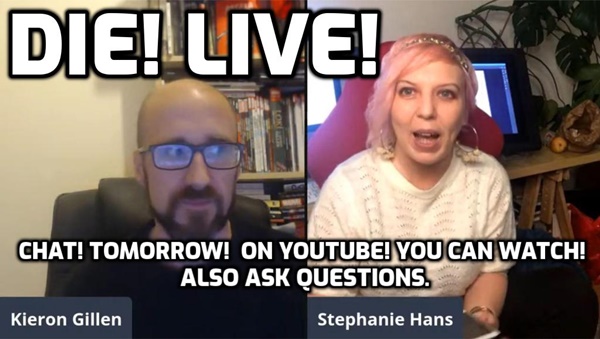 Last week I floated the idea of doing a livestream on Thursday 4th to celebrate the conclusion of DIE. I only got around to trying to arrange it last night at around midnight. Bouncing some chat with Stephanie means we can totally do it!

So, we’ll be doing a live stream here at 9pm (UK time) here. So 5pm Eastern, 2pm Pacific, 10pm Europe. Yes, those times are different than usual. We are in the hell week when British has moved on from Summer time and the US hasn’t (aka the week of missed meetings). Anyway! Come along to the audience and hear us chat and ask questions. Will it just be me and Stephanie yabbering or will there be guests? I have no idea. We only organised it 3 minutes ago.

Yet again, link here. It’ll record for afterwards for those who want to catch up later. 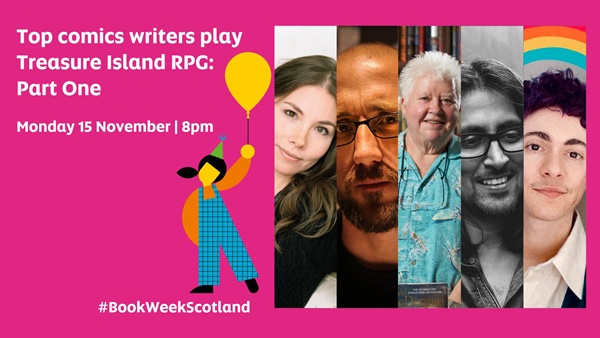 I mentioned this last time, but as I’m doing a RPG as part of Scottish Book Trust’s Book Week Scotland. Here’s the brief description…

Join us as our ragtag bunch of heroes featuring Hari Conner (Finding Home, Into the Dungeon), Kieron Gillen, Marjorie Liu, Val McDermid and Ram V play ‘The Book Shop’, a Role Playing Game written by Adrian Barber specially for Book Week Scotland. A dragon has accidentally ended up in Treasure Island following a spot of bother with a book of spells. Will our heroes be able to save Treasure Island and make it back out in one piece?

The first part is broadcast on November 15th and the second is on November 19th. You can get tickets to live watching at the above links, and you can download the rules for the game yourself here. There’s lots of great other events as part of the week, so do browse the whole programme. 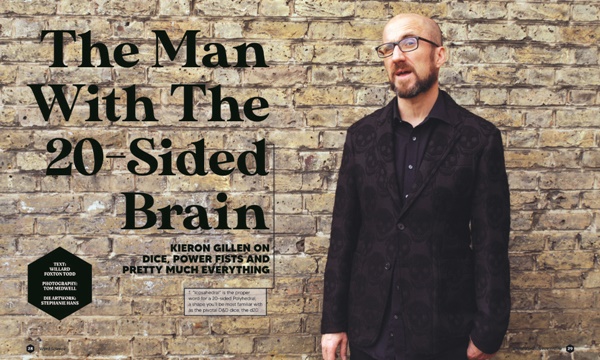 Wyrd Science put their profile interview from their first issue online this week. I don’t get many profile interviews like this which approach me at a specific angle, but looking at the career holistically. The footnotes especially are i) funny and ii) make me oddly aware of the slight quirkiness to what I do - as if Alan Moore’s occult knowledge was derived primarily from Your Sinclair running jokes. It’s worth a read, I think. They describe me as a polymath, which I presume is someone who can do simple math and also assemble warhammer minis with polystyrene cement.

Also, great photography. I have few excuses to bust out the Award Show Skull Blazer any more. Look at me, at work, painting. 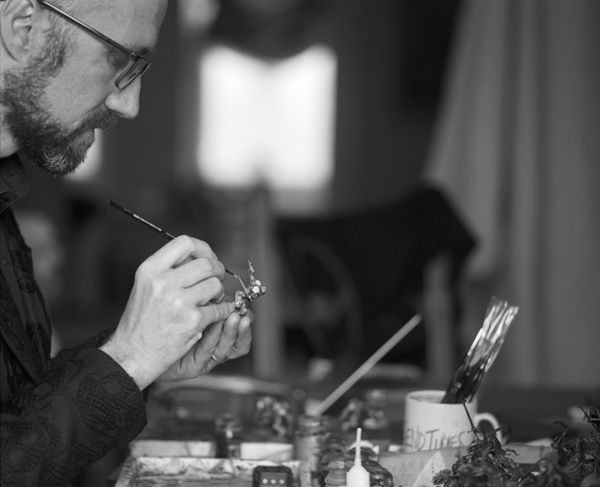 You can tell it’s faked shot, because I’m wearing that McQueen Jacket, and it’s not as if even I’m foolish enough to risk getting Nuln Oil all over it. 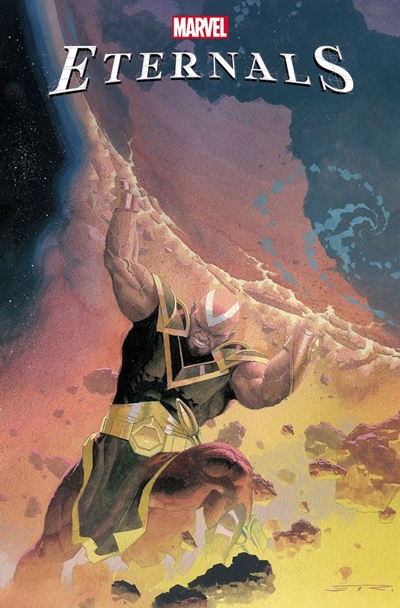 Marvel’s January Solicits are out, where we show Eternals 9’s cover. There it is. That looks heavy.

This reminds me that I saw Darryl Ayo had lost his copy of the first Eternals trade around his flat, so I ended up writing this on twitter, because I definitely wasn’t dodging work. 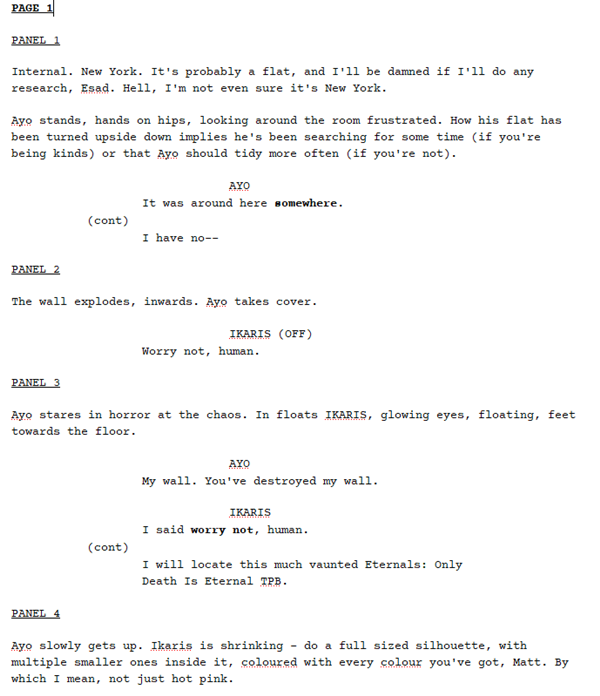 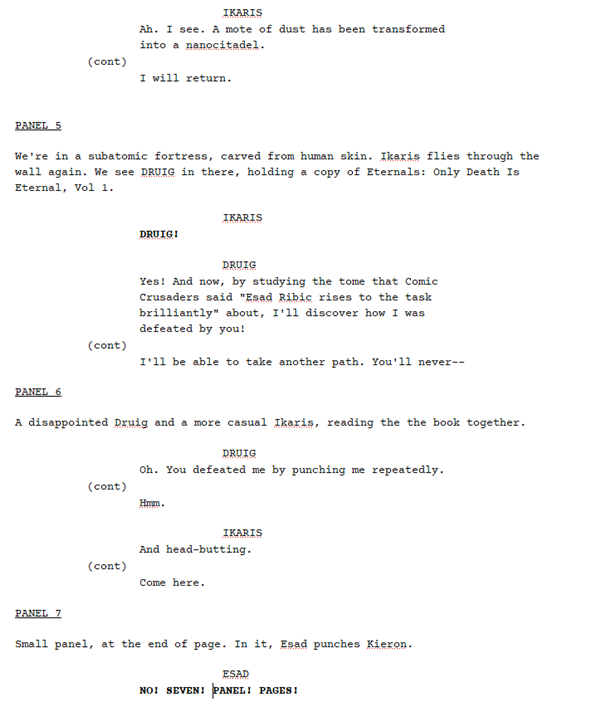 I was hoping to do a bit more of an update on consuming culture (I’ve even been playing a fair bit of an indie videogame, as if it was 2008 again) but this has ended up being another long one, and I have to get all this wrapped up and sent out before a long meeting at 5.

That said, mentioning Luke Haines earlier made me google around to try and check which album exactly Haines called that, which led me to this Quietus piece earlier in the year about After Murder Park, which is, if memory serves me, he described as his first masterpiece? If so, Haines isn’t wrong. I’m reminded I had an episode of Phonogram I wanted to do which lifted Haines unused original title for After Murder Park – Uber Hate. It was about… well, things which I’ve just written out three times, and then deleted each time out of shuddering. Phonogram was aggressively, relentlessly about love of music. This would have been the flip, and the seductive, awful joys of the flip. In a different way, it was very 2008 too. I couldn’t write it now, and I’m mostly grateful for that.

Work is busy. Handed in the first issue of the new mini, and waiting for feedback. Have to do my pass on something I’m co-writing, and then do the hard plotting for the next O&F arc. This should very quickly turn into issue 25 too. That’s actually a relatively easy issue to right, but I want the next six nailed down tightly before I commit. Lots of pieces are in play by the end of Monarchies In The UK, and I need to do my best Her From The Queen’s Gambit.

Back to it. Speak soon.

You just read issue #204 of Kieron Gillen's Wordmail. You can also browse the full archives of this newsletter.