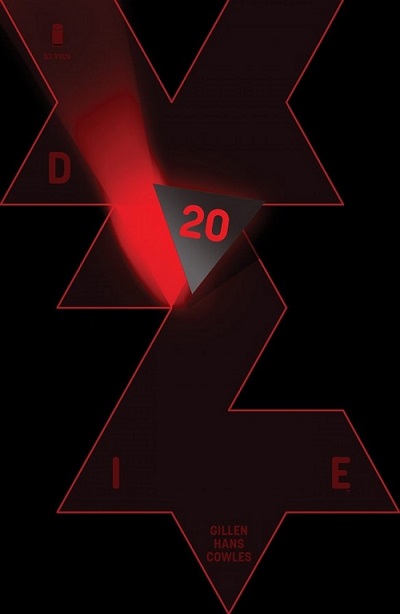 And we reach the end of a series. 20 issues, as planned. At least 25 issues of actual content due to the over-sized issues, making it about half the length of WicDiv, so significant body of work. We’re really happy with how it lands, and we can’t be happier with how people have embraced such a weird, intense little book. I’ve started doing the post-DIE interviews and it’s the sort of work that’s so dense that I’m still realising profound things about it. That’s me. I can’t wait to see what folks make of it.

I was going to cut and paste the “Thank you” essay I put in the trade, but that seems lazy, right? It’s been a great team. Stephanie’s first ongoing, and she nails it. Clayton and I continuing that weird conversation in our work on the letters. Rian bringing a formalist sheen to a genre which is often viewed softly. Chrissy wrestling with this time-mess of a book, and making every line better. Image for letting us do it.

I want to especially thank the Sensitivity Consultants we used on DIE. Natalie Reed, Sally Couch and Ramsey Hassan brought great perspectives to the book, being fundamentally additive to the work. Hell, they were great readers full stop – they gave amazing perspective on the work as a whole, not just the areas we were especially talking about. Huge thanks.

Stephanie does her own thanks thread here, which is lovely.

Anyway. DIE done. The final collection – BLEED – is out in November, so we’ll be talking about that down the line. Do pre-order if you want. Until then, there’s this.

Here’s the first page of a preview… 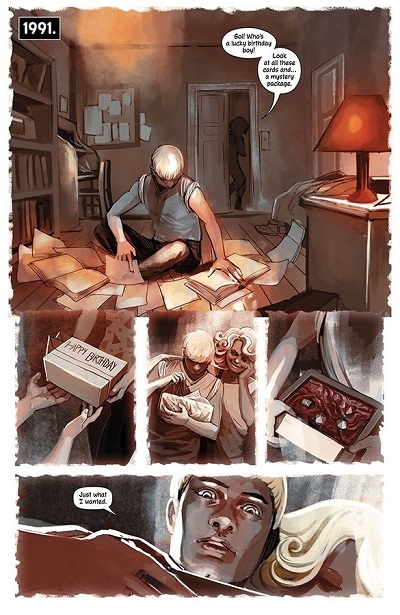 And a second page here. You can find digital links here or get from your local shop.

Yeah, I get it. it is a complicated week for fans of genre entertainment. James Bond says there’s No Time To Die. Conversely, we say it’s time to buy Die. Make your choice.

We put this page in the back of the issue. 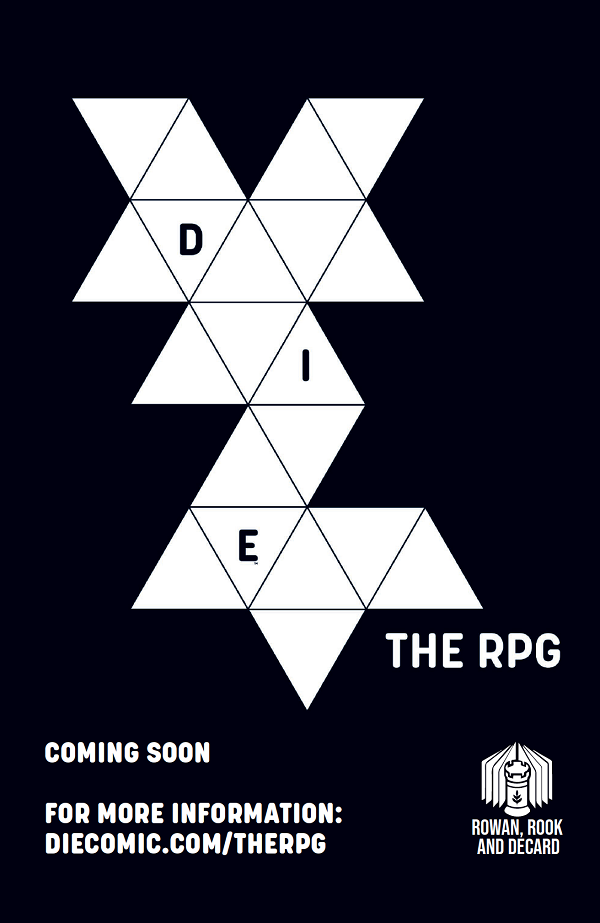 Which is an interesting looking link, right?

If you follow it, it leads you to here which is one of those customary “Click to be alerted when this kickstarter launches” pages.

DIE RPG is being published by Rook, Rowan & Decard, who announce details here We love Rook, Rowan & Decard. They’re an excellent British Indie RPG company who put out amazing work (their Heart just cleaned up at the ENnies, winning seven (count ‘em!) awards) and their values are deeply in line with our own. They’re providing an incredible perspective in making DIE as good as it can be, and are hugely experienced in doing this sort of thing.

Most importantly, their post also gives a time-frame for the campaign: November.

I’ll likely do an initial info sort of thing in the next newsletter for folks, so if anyone has anything they’d like to know especially, do ask. If you respond to the mail, it’ll get to me. I’m happy that we’ve got to this stage now, because the whole “All DIE RPG games are canon” aspect which ties into DIE’s ending. It all sort of lines up. 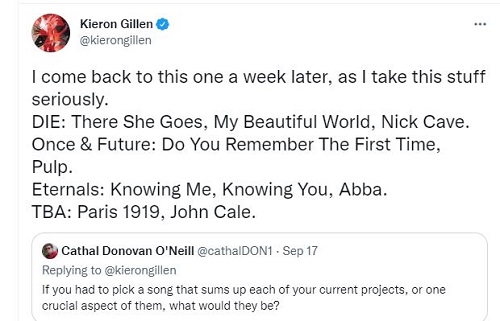 On the way up to Coventry for Meanwhile, rather than actually working, I did a quick actual Q&A thing on twitter. I went back to some questions this week, and the above one is what dragged me back. As I say, I don’t take those things likely. I’m not even pleased with all these answers.

Let’s say a bit about each.

DIE – There She Goes, My Beautiful World – Nick Cave & The Bad Seeds DIE’s actual playlist is here. which – like the book it’s about – is a more oblique and moody thing than WicDiv’s, and was almost entirely done in collaboration with the alien intelligence that is the Spotify Algorithm. That felt appropriate, given the book. If I had to choose a song to sum up DIE, I’d choose its opening one – Cherrylee by Gowns which was an aesthetic north star for the whole project. By now we’re at the end, and increasingly so as the series’ pieces moved towards completing, I came back and back to this song where Cave walks an amazing line between bathos and revelation when singing about the muse, inspiration, fantasy. I can so easily imagine Sol (or myself) howling “And I’ll ask for nothing/ Nothing in this life/I’ll ask for nothing/Give me ever-lasting life.” Quick plug for The Red Hand Files, Cave’s Q&A newsletter, which is perhaps my favourite newsletter of the moment.

Once & Future – Do You Remember The First Time?- Pulp This is the one which held up me tweeting. It doesn’t have a soundtrack, per se, which is one tell. Once & Future isn’t a wrestling with eternity sort of comic. It’s having too much fun to overthink it. I kept on thinking of things that I’d already lobbed on Aphra’s soundtrack – Bad Reputation would be fun, right? C then suggested this, which makes a lot of sense. Distinctly and quirky British, propulsive and with a weird melancholy underlying it. I could at least tie it to three or four characters in the plot, which is useful. I mean, I can imagine Merlin singing this at Arthur in a fan-video cut or something.

Eternals – Knowing Me, Knowing You, Abba As part of a Chriss Arrant twitter thing, where creators hyped their unannounced books with an oblique gif, I used an Abba Gif. I believe it was this. Knowing Me, Knowing You isn’t quite Abba at their most austere and adult, but I suspect the most austere of the upbeat big hits, and speaks a lot to how I think of Eternals. Time, sadness, reaching towards eternal beauty, the sadness inherent in perfection and that they all have Ikaris’ hair-cut.

TBA – Paris 1919, John Cale. Can’t say anything much about this one, but I suspect that there’s going to be people who pick it up and from the very first pages go OH, FFS. The comic does have a playlist, which is a lot of fun, and this is its first track. More down the line when TBA is Ad.

Big week, once more, which seems to be a trend. Not that I’m complaining. On a personal and professional level, things are going well. This is always worrying, as I’m always a waiting-for- shoe-to-drop person. However. I’m even less anxious about some of the things than I have been – as we can talk about it properly now, let’s use the DIE RPG as an example. After a weekend of really looking at the manuscript, and running through it with RRD’s Grant on monday morning, I’m comfortable about the KS. I’m in the place now where I am explicitly finishing up chapters and stepping them away, then sending them over so RRD can properly move into publisher mode. So much is editing as well.

I often think of the bit in Bendis’ Fortune & Glory, his autobiographical hollywood memoir. Firstly, it’s great, so if you haven’t, grab it. It’s one of the books that comes to mind all the time, and a really useful primer for any professional dealing with that town for the first time. Secondly, this specific bit… well, Brian is writing a draft of Goldfish, one of his crime noir indie books. He hands it in. His agent tells him that it’s a little heavy. Brian asks what that means. Well, an average screenplay may be about 100 pages or so. His is well over 200. Brian despairs, and then his agent just encourages him to take a deep breath and then go watch some movies to see exactly how sparse they are. And then, edit.

“There’s a good screenplay in here.”

“There may be three.”

I love that, and as an overwriter, I feel seen. With DIE RPG, knowing the bits that need to be long and the bits which will be better if they’re not is very much this final leg. The game is in a good place – I just ran a short 3-part game with friends, which was just a humbling, rejuvenating experience, and it’s been a long time since I’ve had a game which wasn’t at least good. I just can’t wait to see it all together in a single volume, and share it with people.

I’m almost segueing into talking about things we want to do with the book, and I’ve already said I want to save that for down the line. So I’ll stop.

That’s just one thing, and there’s a bunch more, all of which are thrumming along. It’s a lot. It’s the sort of week that I keep on forgetting it’s my birthday. I think it’s tomorrow, but I’m not going to check, as I’ve really got to do final tweaks on Eternals 7 and a datapage of gerrymanding, in the mighty marvel manner.

You just read issue #201 of Kieron Gillen's Wordmail. You can also browse the full archives of this newsletter.