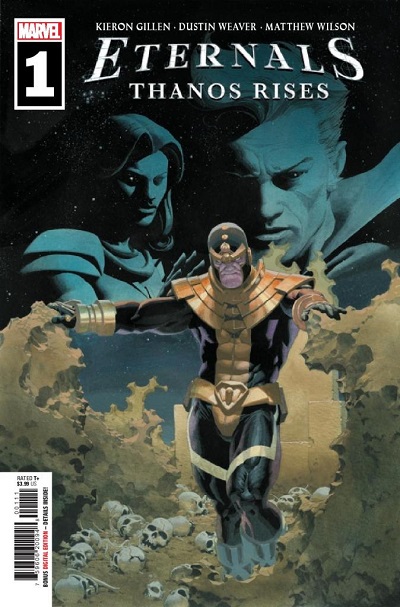 And it’s the release of the first of the Eternals specials we’re having between the first and second arc. Here we go into something I’ve alluded to a few times – the Titan Schism, which is one of the big Eternal Civil Wars. This (as the name of the schism suggests) led to the creation of the settlement on Titan. It also (as the name of the comic suggests) led to the birth of Thanos.

There’s a lot here. It’s epic, sure, but it’s just a deeply sad comic. I said to Dustin in the script that this is trying to evoke a little of Kirby’s THE PACT over in New Gods. We go to a different place, but that’s the timbre. Dustin just went there – what he does in the war sequences is startling, but what he does with the emotional climax is something else. It’s bleak. Bleak, bleak, bleakity-bleak.

This is the second time I’ve worked with Dustin Weaver. The first was Uncanny X-men #14, the issue which is a techno-victorian take on Notes From Underground and one of my favourite issues I’ve ever done with Marvel. The process was similarly amazing here. Matt and Clayton are still with us, and Clayton finds fascinating ways to evoke its nature as a historical piece and Clayton continues to go to town with all the data we’re throwing around.

There’s a preview here which I’d normally show a page of, but I’ll save it for the comic. I was tweeting the spread over on twitter, which is a different kind of forum, so go nose there if you want.

It did prompt me to edit this, to explain the timeline of Earth. I include this, in case it’s useful. 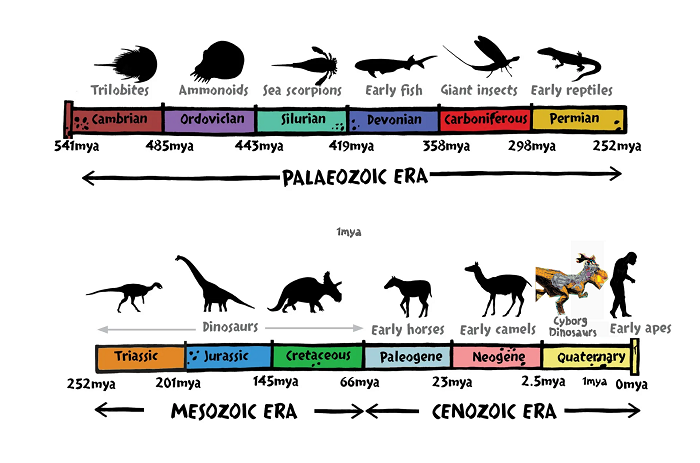 For those who are wondering when these will be collected, the plan is to collect any specials together into their own trade. I have no idea where that’ll be. Much like the WicDiv specials, I see them being absolutely additive to the whole story, including useful information for the main story… but we will also reintroduce anything from the specials as they’re relevant. With stuff like this my goal is always to make people want to read it rather than twisting their arms to do so. 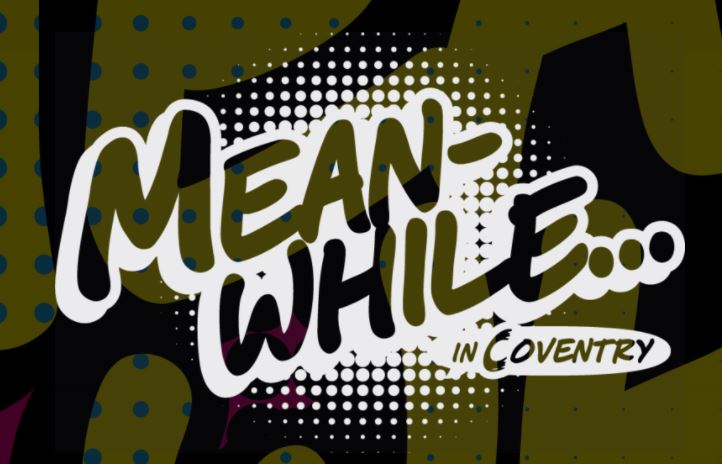 This week I’m actually doing a comics convention, Meanwhile in coventry. I’m both excited and nervous about this. I’ll be socially distancing here, and be masked in almost all situations… but I’ll also be doing some signings and a couple of panels.

They’re both exciting, but the first one is just Al Ewing and myself interviewing one another on stage, and that just sounds exactly how I’d like to spend my Saturday afternoon. It’ll be good to see folks, from the middle-nose upwards.

It’s free, but you need to get a free ticket to enter event spaces. 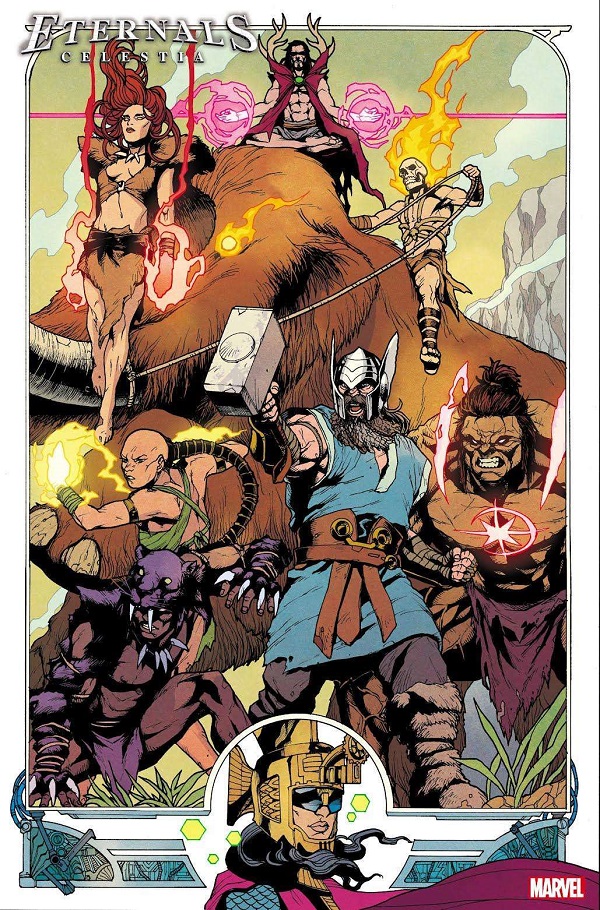 Talking about previews, the second Eternals special has just dropped some preview pages from Kei Zama. There’s one above. And look - here’s one below too. 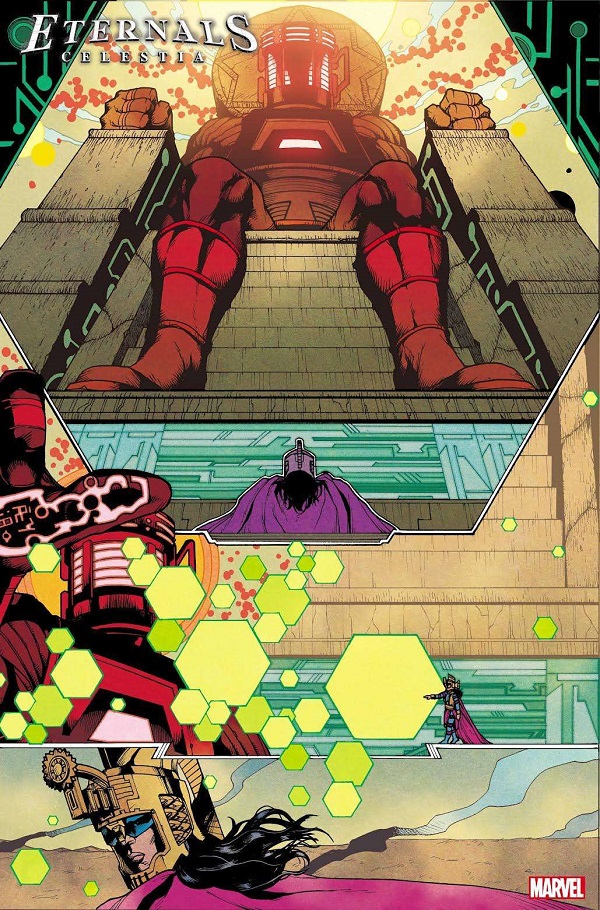 You can see the rest here, along with a quote from me 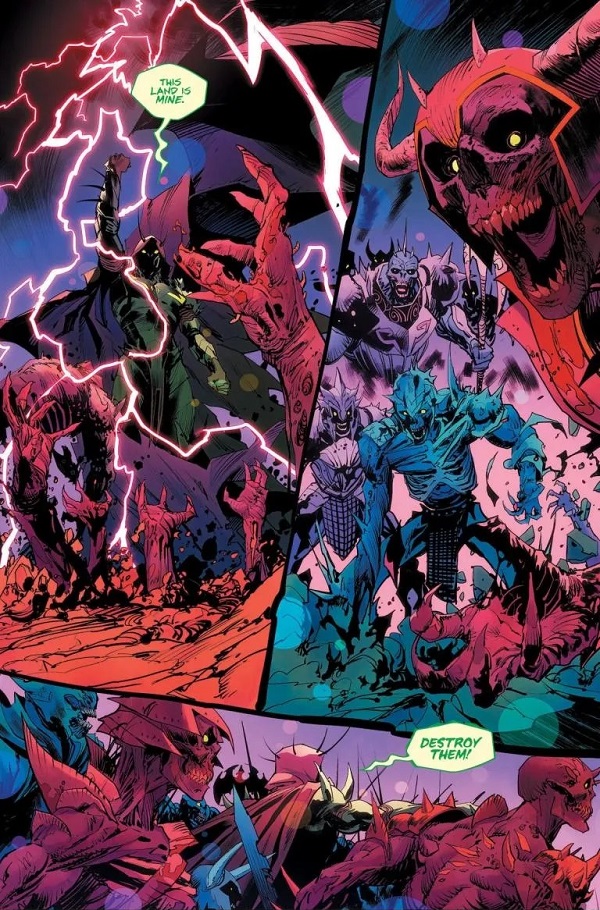 More previews! Once & Future 20 is out next week. Look above! Preview page! I grabbed one which doesn’t really spoil anything, except I) Arthur is still getting on with his being an undead monster thing ii) Dan and Tamra are still getting on with doing monstrous and beautiful things on the page.

You can read the rest here.

My primary work has been polishing up and handing in issues I had lying around. So the second issue of New Thing, and issues 11 and 12 of Eternals sent flying towards editors, which is a whole lot. I’ve started the third issue of New Thing, but I’m writing a few things alongside it – a short one-pager concept outline for a comic mini I’m considering doing, and tweaking a synopsis for one of the big projects I’ll be co-writing for the rest of the year. I’ve also been running an absolutely deliriously fun DIE game (which I’m hoping I’ll be sharing the videos of afterwards) and doing more DIE RPG stuff writing (I may have the final missing pieces of the Player-Master). We just had a big long meeting with the publisher this morning, in terms of plans for things going forwards.

In short: yeah, the next few months are not looking like getting any less busy. I want a lot of this off my desk by Christmas (or at least mostly off my desk, sort of hanging over the edge, so it can tipped off easily). I’m explicitly trying to create space in the new year. Everything I do now is stuff I don’t have to do then.

Which links to the general tidying mode in the house. I mentioned last time that C and I are doing a book purge. You can likely imagine what a house of two writers look like, each with over 20 years to accumulate books looks like. It’s a lot, in every definition of the word.

We’re still in stage one, which is basically the first easy pass, but with rules we’re trying to follow. If it causes too much thought, we just skip past it. We’ll come back later. Speed is the point.

The main filters are…

Have you owned this book for longer than a decade and not read it? How easy and cheap would it be to replace and/or gain access to? *Do you possibly need it for reference?

These intersect in lots of ways. I’ve got rid of almost all my Marvel trades, unless they’re in a particular fancy format. With Marvel’s tendency to keep trades out of print, it’s not easy to replace – but I’m a Marvel Unlimited subscriber. I want to read something, it’ll likely be there.

Even prose fiction I’ve liked and could see myself realistically re-reading, it has to be really hard to get (and not available digitally) to not make it worth getting rid off. Yes, I liked this novel… but I’d be willing to buy it again for the price of a novel if I did want to re-read it. And if I’m not willing to buy it, why am I keeping it? It’s clearly not good enough.

The time limit is a useful one one. Life is short. I am interested in a lot of books – and I also know a lot of writers. My book hole is going to grow faster than I could ever read. If I haven’t read it, I likely won’t, so it’s out of there. And see second rule – if I did want to get it, I could.

Non-fiction is getting more of a pass in all of these, as they’re easier to get smaller use from. There’s historical books I keep around for a chapter. Those sort of decisions are going to be in a later pass. Do I really need all these books about WW2? I’m not Garth Ennis.

Comics are also getting a temporary reprieve. If I haven’t read it, I’ve moved to a new pile. Each day I’m trying to grab a few trades and try to read some of it. If it doesn’t make me decide its actively worth my time in the first chapter, it’s also gone. Some of them I’ve read all of, and then still decided to add it to the pile, for all the above reasons. Yes, good stuff… but now I have read it. It’s gone.

Perhaps unsurprisingly, the things which seem most safe are small press indie comics. These have a historic value, and are almost impossible to replace.

Anyway. Big ol’ pile has been prduced. Next is the harder questions, like exactly how many editions of Casanova do I need to own, as it’s presently “All of them” and that seems a little too much.

You just read issue #199 of Kieron Gillen's Wordmail. You can also browse the full archives of this newsletter.