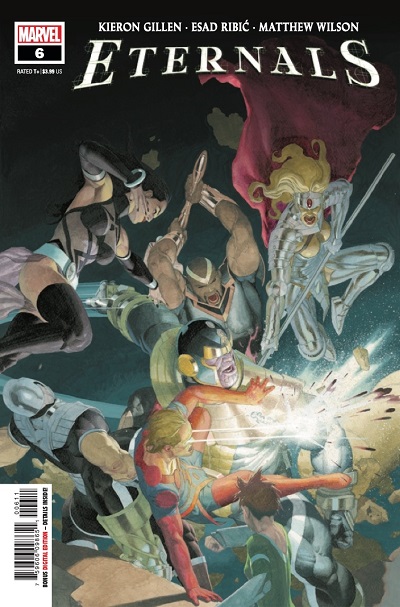 We reach the last issue of the first arc of Eternals. After this, we have a couple of months of specials, before returning with the next arc.

It’s a climax, so I don’t really want to say too much. It’s where the last of the key, initial ideas for the Eternals come into tight focus. I think the whole team does amazing stuff. I love epic superhero comics, and that’s on the page – but it’s also absolutely grounded on an emotional human level (even with the angelic Eternals). Matt gives the end of the world a romantic, petrifying ambience, and Clayton is pulling off every piece of ludicrous nonsense I throw at him. The last data page in the issue made me smile a lot. Though, being me, there’s not much to smile about here. Even though the jokes, this is bleak and sad, and very much the book I wanted to do.

There’s a preview. This is the third page, as the first two are spoilers, and Thanos and the Eternals bashing the living hell out of one another isn’t exactly a spoiler, right? 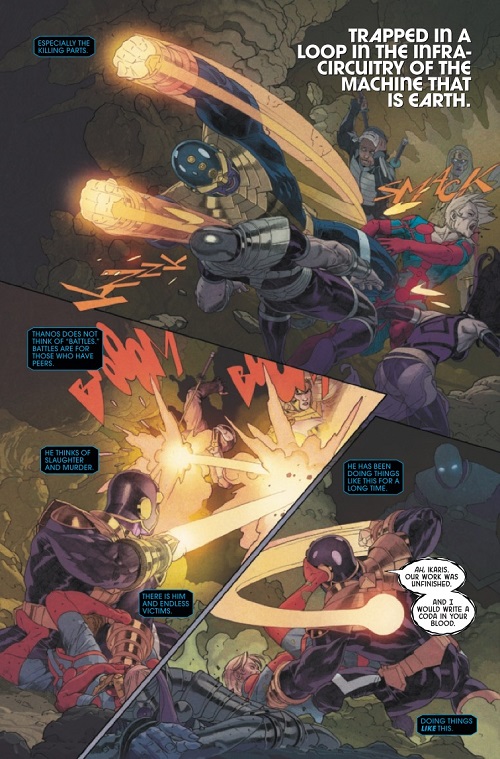 Those Eternals and/or Thanos sure do like bashing the living hell out of one another. See the rest of the preview here and buy from your local shop or digitally. 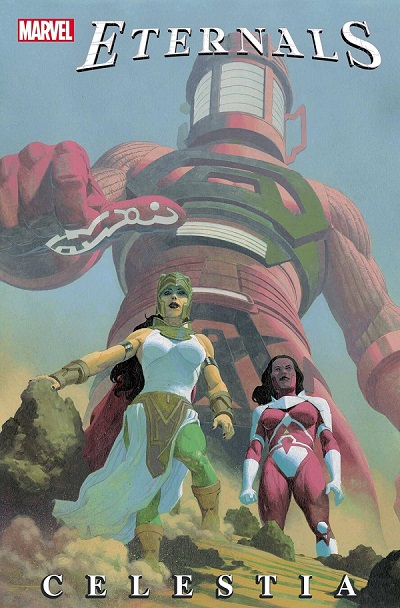 Also announced was the second of the Eternals specials, with Kei Zama on art. Here’s the solicit…

Now that the truth of their existence is revealed, Ajak and Makkari must pick up the pieces and try to find a road forward… no matter how terrifying it will be, or how their choices will irrevocably shock the rest of the Eternals? And how do the Avengers of 1,000,000 BCE figure into it? And they asked me to give a quote, to which I said… When developing Eternals, Ajak and Makkari were two of the characters I was most excited about,” Gillen said. “I had so many ideas. The problem was trying to find a place to introduce them in a way which gives enough space to show what a fascinating, funny and genuinely heartbreaking odd-couple they are. Suffice to say, this is the space, and I can’t wait to show what Kei, Esad and I have cooked up with them. Also, taking the Avengers of 1,000,000 BCE out for a spin. I’ll be honest - the first time I saw Ghost Rider on the back of a Mammoth, I did think ‘I’ll be having some of that, thank you very much.’”

As I said when we announced Eternals: Thanos Rises, the model for these specials are what we did with the WicDiv specials. They’re absolutely part of the larger picture we’re building, and positioned to be directly relevant to where the story is (or is about to go next). One of the joys of Eternals is the sheer size of the canvas we’re defining, and bouncing around the timeline, highlighting key aspects is a big part of it.

Also, as I note in the quote above, this is our chance to meet Makkari and Ajak. My original plan was to get them into issue 6, but when I did the tight plotting, I realised there was no way to get it in there and do justice to the climax.

Oh – and Kei is a joy. She’s got a heavy metal kirby-attack to her work so far which I can’t wait to see come together. This is, as the Celestian Priest focus would suggest, one of the trippier areas, and she’s nailing it.

I’ve just come off my second optical migraine in the week, after going some months without one, which is a tell. It’s been a stressful time, for a bunch of reasons, both professional and personal, ended and ongoing. Some in comics have lingered with me, and I wanted to talk about one of them, as it’s got under my skin a bit.

Last Friday, Lewis LaRosa, the original artist of The Scumbag and artist of the first issue just dropped some tweets about his dissatisfaction with how things went down. Twitter exploded, La Rosa eventually removed the tweets and Rick gave a statement to Bleeding Cool. The whole write up’s here](https://bleedingcool.com/comics/rick-remender-and-lewis-larosa-at-odds-over-the-scumbag/).

I’ll admit, I immediately raised my eyebrow at the time – not out of doubt, but just in terms of what we were meant to make of it. None of LaRosa’s statements were actually claiming anything specifically, and folks were deciding what it meant, and primarily jumping to the most extreme reading. The initial one – Remender having blocked him – could have been for literally anything. Clearly there was animosity there, but it seemed premature to go to Burn Remender. After Remender’s statement added some more details to it, it appears to be much more a divorce after a creator owned comic falls apart at the seams, and while (Remender is pretty reconciliatory in the statement)[https://bleedingcool.com/comics/rick-remender-and-lewis-larosa-at-odds-over-the-scumbag/], reading between the lines, there’s certainly things that he would be justifiably angry about.

I’m trying to not pick sides, because it’s not really useful or relevant – there’s so much stuff we don’t know, and so many assumptions that we are making. The “Why didn’t they…” game is easy to play (and I’ve done it myself) but it’s not a game we can win, as we don’t have all the pieces. However, even with the most negative readings of the facts, Remender’s position don’t seem heinous or predatory, but trying to continue a book in a far from ideal situation. Everyone’s got paid, except him, and presumably well, because otherwise he’d have made some money. To put it bluntly: it’s a weird form of exploitation where the exploiter goes deep into the red because they’re giving all the money to the artists AND not taking any money themselves.

Except… it seems that there’s a lingering sense that Remender is specifically monstrous here. I’m not on twitter as much as I used to be, admitedly, but It’s not as if I’ve seen many people walk back their initial take, or engage with Remender’s statement.

I think it’s for a pretty simple reason: speaking broadly, comics twitter doesn’t like Remender. They primarily don’t like him as he’s said some dumb stuff on twitter, and so at least some people are pre-loaded to be overjoyed that he could be put in the He Is A Bad One box.

I think that’s what’s got to me. Clearly, dislike Remender for whatever reason you wish, but this specifically seems actively unfair, especially given Remender’s actual history.

There is literally nobody of his generation who has done more creator owned work, with long term relationships, with equal ownership of mostly completed series than Remender. A few days after this, comics twitter turned to discussing my generation of writers seeming to have abandoned that line of work. It was a weird conversation for a few reasons (not least that it didn’t mention artists in any way), but I saw myself being brought up as the exceptions. I didn’t see Remender mentioned at all, and Remender has done twice as many Image books in the period as I have.

One of my standard bits of advice for artists considering hooking up with writers is seeing whether the writer has managed to maintain long term relationships with artists. You date enough people and eventually you go through a bad break up. It’s when all your break-ups are bad, that’s the tell.

Remender’s record is as good as anyone’s. It’s telling that three of his artists explicitly said nothing but positive thingsabout their relationship with Rick.. All of which is why I ended up losing so much sleep over this – this larger context was being lost. Given all he’s done, reducing him to this seems unfair. That many of the folk seem in these circles seem to have more time for me than Remender made me think it worth talking about this to anyone who actually reads the newsletter.

Oddly, despite all the stress everywhere else, the work’s been pretty joyous. After the Masterclass was over, it removed the only Extra thing in my schedule, which focused my life down to just what I have to do. I handed in Eternals 10 on Friday, passed over an early draft of the new approach to the information of DIE CORE and then started a whole new project on Monday. I’m going back to that now, before I’m in (erk) 4 hours of zoom meetings from 5.

You just read issue #195 of Kieron Gillen's Wordmail. You can also browse the full archives of this newsletter.