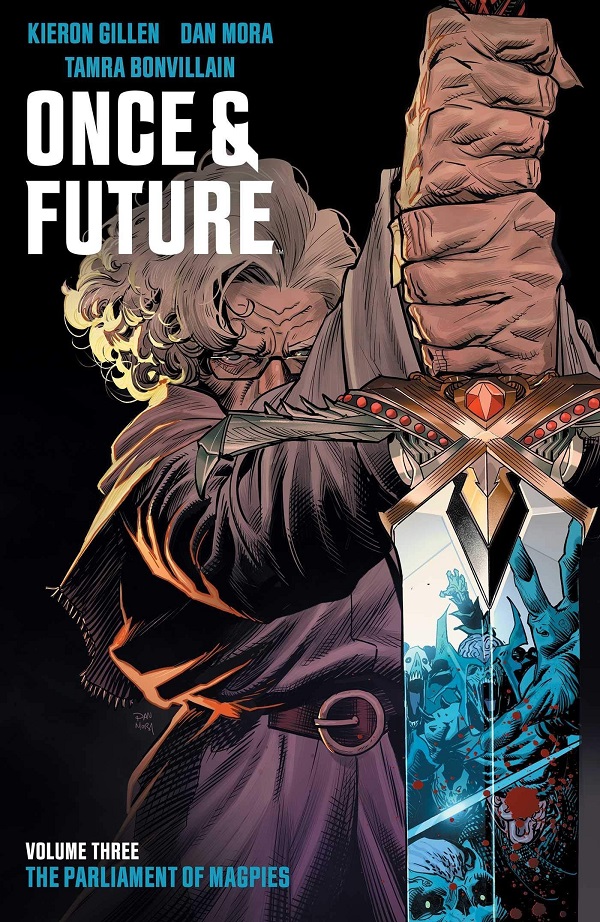 And the third volume of Once & Future is out in comic shops today. It follows in book shops a little later – I see it’s next week in US, but not until next month in the UK, it seems.

THE PARLIAMENT OF MAGPIES is where we take all that’s been put into motion in the last two arcs, and build towards perhaps the biggest status quo change in all of Once & Future. It’s us at our most 2000AD-y political, has some huge action set-pieces but is also the arc where I’m most happy with the character work. There’s some scenes in here which are just people being people, and I can’t get enough of it. Dan and Tamra do amazing things to each page, and rise to everything I throw at it. There’s one character design which is clearly Dan scratching a particular fan urge, and I live for it.

The opening to issue 13 is here, which certainly shows you some Magpies. It’s also one of the scenes that I’m just really fond of.

Available to buy in your local comic shop or digitally.

It’ll be a curtailed newsletter today, because I need to spend the rest of the day doing my final prep for the Masterclass tonight. This is basically just looking what I did at the last one, and seeing how I can improve it – there’s a whole example I’ve rewritten which I’m really happy with, for example.

Tickets are for sale until 4pm British time, so it’s not too late to jump on. The event starts at 6pm.

Big week, but one of those Big But Can’t Tell You Why ones. But big, across several areas where bigness can incarnate. Suffice to say, there is bigness, happening. I appear to be trying to essay Ducan MacDonald, badly. Again. Lawks. Now, wait, I think that’s a J Nashism. I give up.

It’s one of the most frustrating things about the gig. Sometimes you just can’t talk about stuff. Sometimes you just can’t talk about stuff even after it’s all done, for dozens of reasons, some legal and some ethical. Sometimes you’re just petrified of accidentally saying something at the wrong time. When I’ve been working at Marvel, I am always extra anxious, in fear that I’d accidentally tweet something that happens in someone else’s comic before it comes out. I find having secrets hugely stressful, which if I stop for a second, makes this a weird career to choose.

Work is also broadly busy – a small extra thing from Marvel is being announced later today, and I just went through the artist’s roughs for the issue, which are a total delight. I did the same for Stephanie’s roughs for issue 20, which makes the end real – as does my early readers being sent issue 19, which has prompted a lot of emotions. It goes to press next week, and will be with you shortly. Once & Future 19 is also just being finalised, and will be good to be back. I’ve almost finished my pass on DIE CORE, which I’m really pleased with – I’ll come back to it over the weekend, but it really feels like a useful version which folks could read and get to table with less heartbreak. You should save the heartbreak for during the game, not in the prep.

After the masterclass later today, I suspect I’ll slip back to polish up Eternals 9, and next week likely start on (er) a new project I’ve just got given the You Can Write This Now. Or possibly more Eternals. Or possibly even the other Big thing which is now properly in motion.

But, as I said, tediously, I can’t talk about that. Or the other thing. Or even really the Eternals thing. Or anything. So I’ll shut up, at least until 6pm tonight, when I will just talk and talk and talk.

You just read issue #194 of Kieron Gillen's Wordmail. You can also browse the full archives of this newsletter.