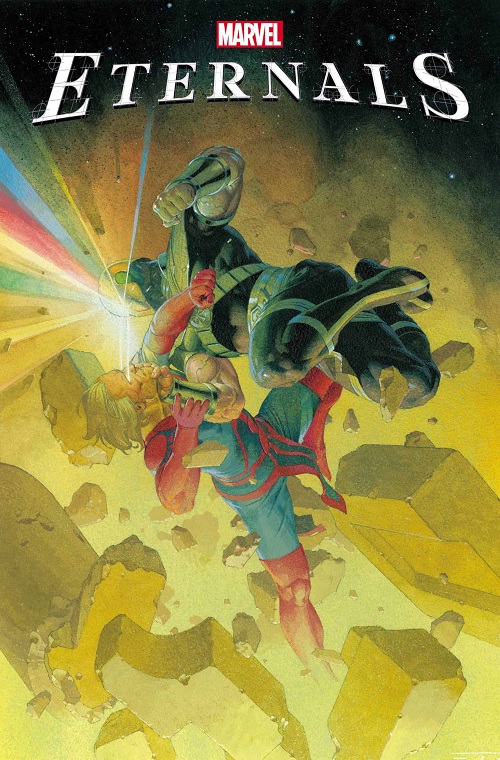 After a month away, we’re back, and charging into the climax of our first arc, Only Death Is Eternal. I don’t really want to say much more, as clearly climax means things start exploding. What can I say safely? Well, as the cover says, this is the introduction of Gilgamesh (aka The Forgotten One) and the introduction of our take on him. My core image was as if a vigilante character like Batman was on a cosmic scale, stepping out of the shadows of an alleyway between dimensions, grabbing someone like Annihilus around the neck then holding him over a black hole…

Esad gives him an amazing look, and Matt is continuing to give all this such a huge mood. I also get to write a bit more Tony Stark, and Sersi continues to be a delight Here’s the first page of the preview… 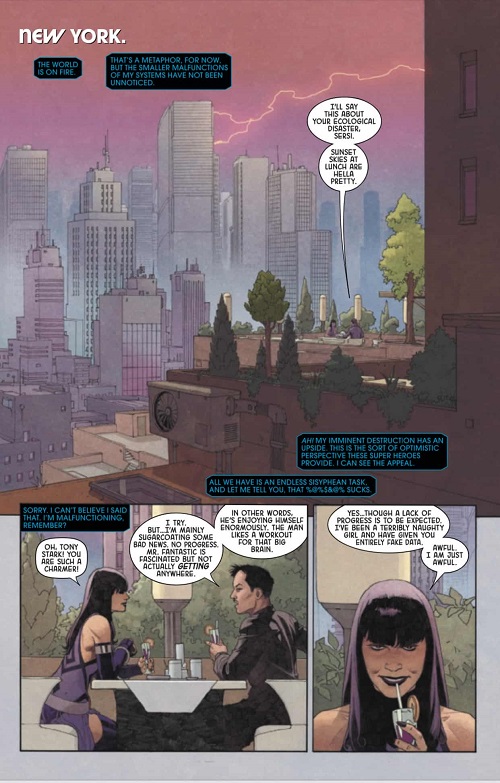 …and you can read the rest here. It’s available from your local comic shop and digitally.

As part of Marvel’s Pride anthology, a bunch of the creators involves did playlists. One set is here and the other set is here.

This one is mine… 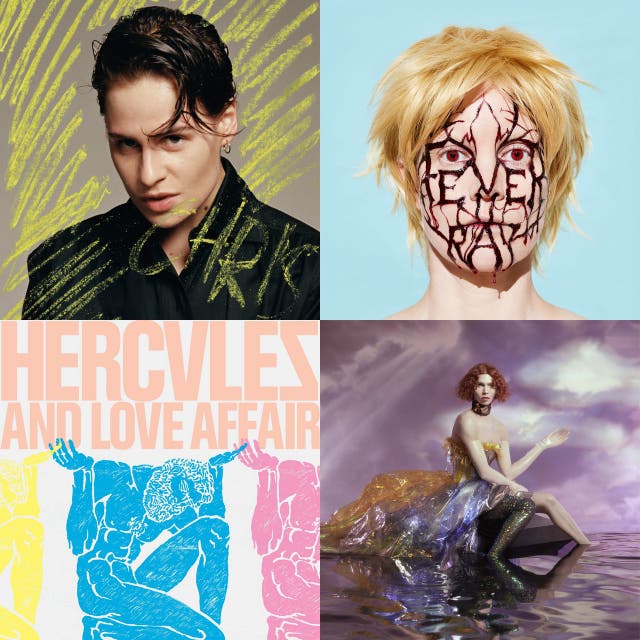 I never said that out loud - playlist by Kieron Gillen | Spotify

I leaned into I Am Totally Old And Will Show It and also I Am In A Bedsit in the 1980s and At Least Explicitly Queer Theme or Out Queer Performer. 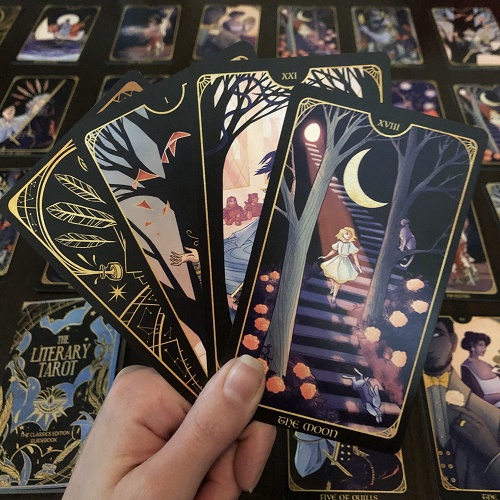 At the time of writing, there’s two hours left for the literary tarot kickstarter. By the time I’ve posted this, it’ll be less, and that’s assuming the server sends this flying into space in a swift fashion. Still – here’s last minute plug for this amazing project. I picked Crime & Punishment to be illustrated into a card, which I’ll write an interpretation of. 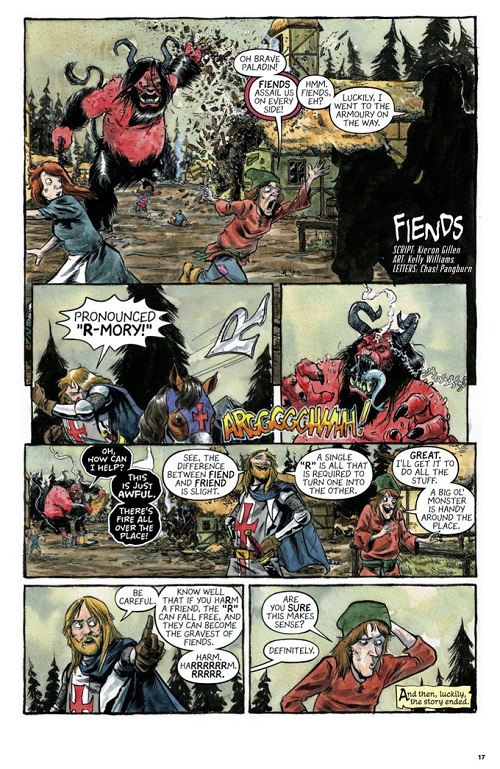 I mentioned this Hero Initiative kickstarter in my link round up last time, but let’s show it again to properly show off the page Kelly Williams and I did. You can back it the whole project here, which includes a load of awesome creators.

I haven’t done a Tumblr Ask round up in the newsletter recently, have I? As always, send your Qs here.

Any chance of the WicDiv hardcovers being reprinted? They’re all out of print and going for a lot on the secondary market

And I mean that in a “there really aren’t any plans, we’ve talked about it and we likely won’t do it” rather than a “we’re keeping our cards close to our chests while we make up our mind” way.

Been twelve years but I still don’t get it, so solemnly asking for an explanation - Manchester Gods, Loki and Leah tracking down the strongholds of the New Gods - Leah mentions a Green House in Northampton as one of them. What am I missing?

There’s a story, which I believe I saw before, but I remember it most clearly from ALEC: HOW TO BE AN ARTIST from Eddie Campbell where in the 1980s, when Watchmen is blowing up, everyone is telling stories about how loaded Alan Moore is.

Eddie asks him about it, and he tells him.

“Yeah. I bought her a greenhouse.”

Are you surprised how vocal and loyal readers have been to your Uber series? It’s been on indefinite hiatus but people still hold out hope

I’ve been touched. “Surprised” is probably the wrong word - like, I 100% get why people would be asking after something so close to the end they’ve followed for years - but I’m glad people care. I just wish I had more useful things I am able to say.

Would you mind talking about Busted Wonder and your experience with the Web Comic format as a whole? Is it something you would ever be interested in trying again?

This is such a huge question, I’m not sure what to say.

Busted Wonder was a collaboration between Charity and myself. I believe it was written after I’d written the first draft of Rue Britannia, but before the rest of it. Charity and I had done a few comics before, and she asked me to write her something longer. I asked her what she wanted to draw. She said “I want to sit and draw fairies ALL DAY LONG.” I went hmm. Then I found myself looking at something to do with circuses, and realised what I wanted to write.

I wrote it, and Charity took a few years to draw it - clearly, doing a webcomic for no money is a lot. It’s an unusual work in my history - it’s obviously an early one, and shows it, but it’s also the only time I’ve ever worked in that 80-page-OGN format.

That it is so short makes me think it’s not really a webcomic in terms of how people tend to talk about them. I mean, it clearly IS, but the lessons we learned from Busted Wonder don’t necessarily transfer across.

I’d love to do a webcomic again. I’d also like to write to the 80-page novella format again. I suspect the latter is more immediately likely than the former - seeing Image do a string of excellent short OGNs has made me kinda hungry.

I am a big fan of DIE and I love how it’s going. For some reason DIE is starting to remind me a bit of WATCHMEN (mostly because of a cast of 5 central leads), and I wonder if Chuck is your take on Rorschach (Initially jerky and loathsome character who ends up proving to take unexpected moral stands as in DIE#17)?

Secondly, I’d disagree on your take on Rorschach. From the first monologues, he’s saying he won’t compromise, even in the face of Armageddon, and when that literally happens, he does exactly what he said he would do. He fundamentally doesn’t change.

The ethical stand is unexpected, but a logical growth of the core of him. The reason why it’s unexpected is because there’s so much else that is loathsome about Rorschach that we miss the elements that aren’t. Watchmen, speaking broadly, is talking about the seemingly miraculous complexities that humans can include and that - and this is the irony for Rorschach - they’re rarely black and white.

Thirdly, hey, Watchmen was how I got into comics, so it’s always going to be an influence. Less here than WicDiv, I suspect - DIE is far less formalist than WicDiv, in the tight comics sense.

(If you include the RPG, that changes.)

30th June. Half way through the year. I want to use the word “vertiginous” for the second time in a newsletter, and that’s just not on.

I wanted to talk a little about DIE RPG this week, and also some capsule reviews of what I’ve read – Austen’s Northanger Abbey and Arkady Martine’s A Desolation Called Peace. I hope to do so next time, but if not - for the later, it absolutely builds upon and concentrates everything I loved in her A Memory Called Empire, and I am all here for poet-diplomats, causing trouble. For the former, I did this on twitter… 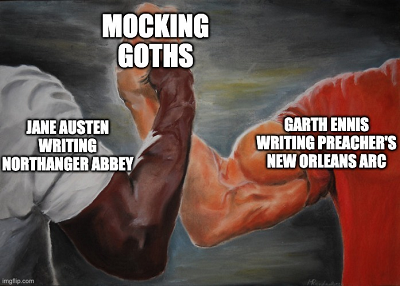 …which sums it up pretty well. I returned to Austen as I’m playing in a campaign of the excellentAusten-RPG The Good Society which it absolutely succeeded in inspiring me. This wicked delight just runs through it, and she nails her parodies as she moves between mood.

In terms of DIE RPG I’m now three episodes into my second full playtest of the DIE campaign rules. It’s deliberately accelerated, planning to go through the structure in 10-12 episodes, so I can see how certain things develop in a timeframe. Here we are in the first session… 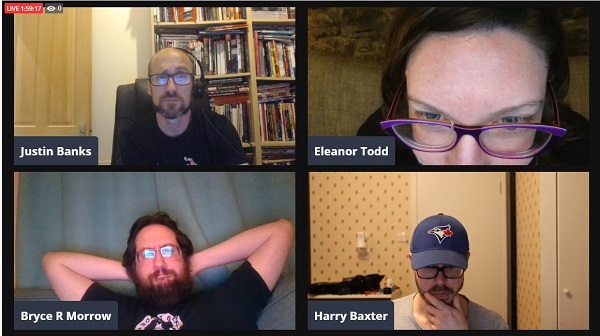 …and it’s basically going really well. Last night’s game was something else, and made me walk away fascinated by how lightning in a bottle games can be.

Work wise, I have written a lot, and people have continued to give me money for it.

You just read issue #191 of Kieron Gillen's Wordmail. You can also browse the full archives of this newsletter.