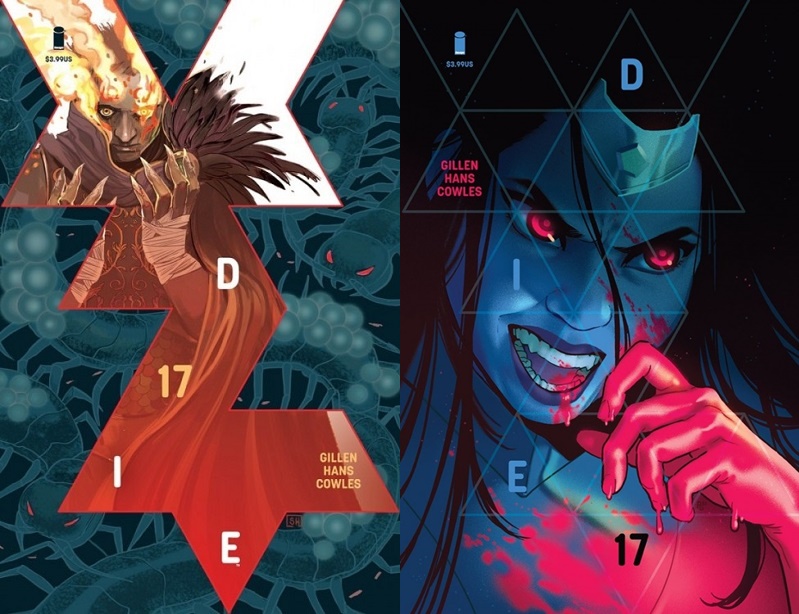 More DIE. It’s strange as we head deeper in the final arc, and we just start putting cards on the table. Last issue was much more the thematic homage part of our focus issues – the one is where we play autobiographical games with the figure’s history, and also reveal a whole bunch of stuff. There’s one image here which has been in my head the beginning, so it’s great (i.e. horrific) to get out there. It’s also the issue which features a character created by the winner of our competition. That’s him on the cover. Hope nothing terrible happens to him. That would be awful.

Here’s the first page of the issue… 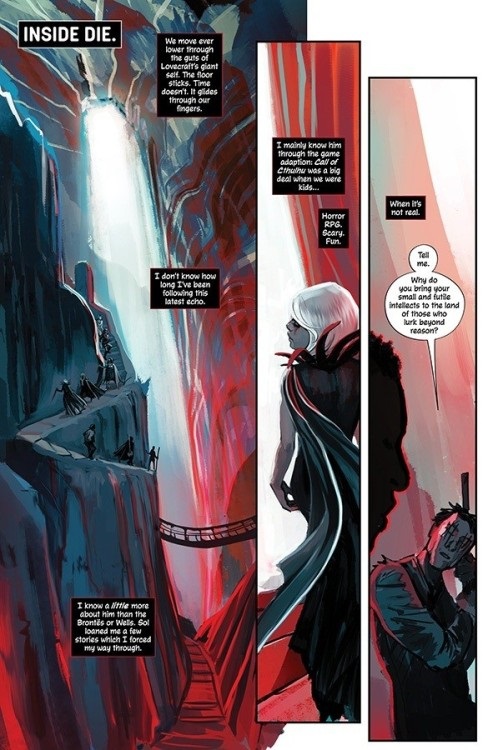 … and you can read the rest here.

You can get it from your retailer or digitally. 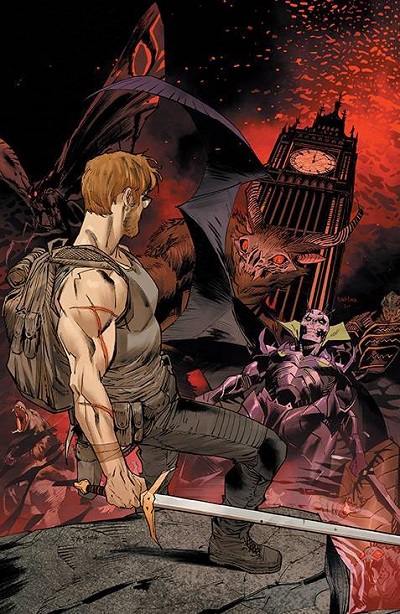 I see that Issue 19 of Once & Future has just dropped in the August Boom solicitations. Go read ‘em here, if you wanna, but it’s out on August 25th and I can’t tell the title of the arc, as it’s a spoiler. I am a fool. Dan and Tamra are just doing amazing things in the issues we’re working on, and so much of this book is me throwing monstrous, delightful things at them and seeing what comes out the other end. 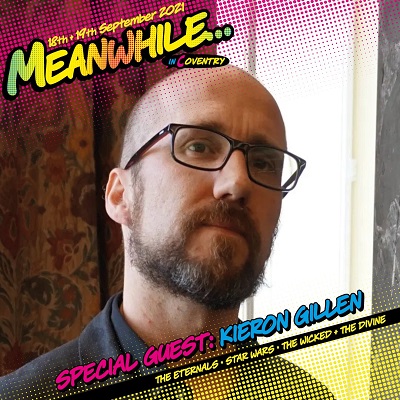 So, assuming the country is in a state to allow such a thing, I’ll be appearing at Meanwhile… the new comics convention in Coventry. September 18th and 19th. Go have a nose at the site – it’s very much that sort of multi-venue, integrated with the city sort of con. 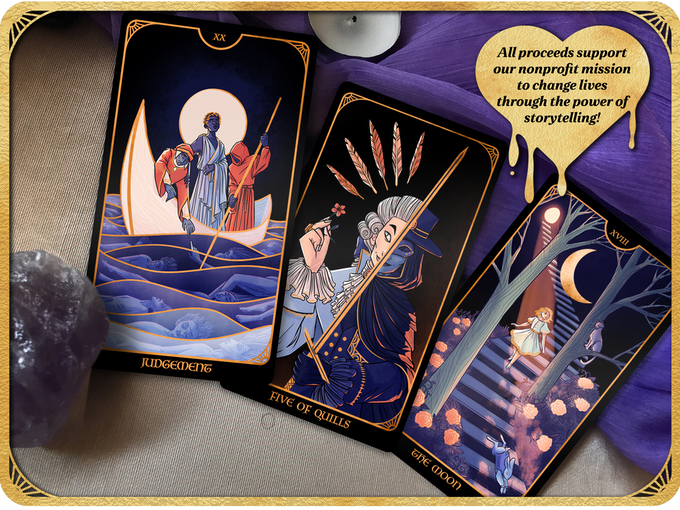 I was asked to be part of this, and it’s a delight. The non-profit Brink Literacy Project has gathered a bunch of writers together to collaborate with artists to create a whole Literary Tarot. Basically, each author selects a classic novel, which prompts a conversation, which is then paired with a tarot card and then we’ll write up a little explanation for the card’s symbolism.

There’s so many amazing creators involved here, so go nose at that. I’m doing 5 of Quills (The suites have been themed appropriately) and paired with the Big D’s Crime & Punishment.

The kickstarter is running at the moment, so do go nose and consider supporting

Man, every time I write this sort serious item I think “Chip would put a joke here, right? Why am I not awesome like Chip?” This is the burden we all bear, I guess, except for Chip. 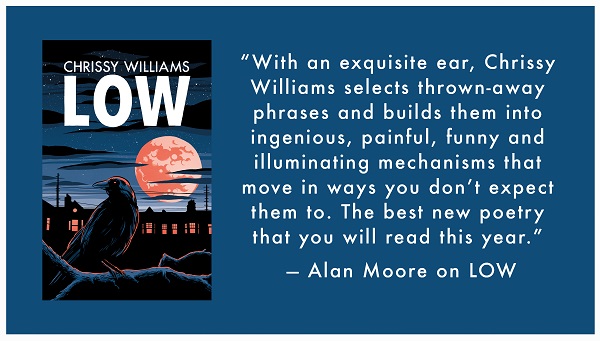 Oh – Low came out, and Chrissy got a lovely quote from Alan. You can read it above and you can order Low here. 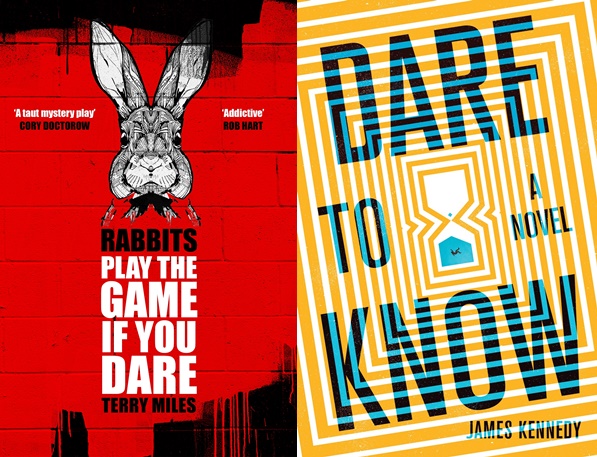 Terry Miles’ Rabbits actually came out yesterday. It takes place in the same world as a podcast series, which I haven’t listened to. This caused no problems for me, and this is a self-contained piece I fell into. Nicholas Eames quote says “Murakami meets Ready Player One” which while I had (er) Severe Reservations about RP1, it’s a useful shorthand – this is a more literary take on sifting through the detritus of culture, and has a real Creepy Occultist approach which makes the ARG feel more ARGHHHHH. It’s very much in the mode of the existentialist, nature-of-existence weird thriller.

James Kennedy’s Dare To Know, out in September also has a suspicious eye at consensus reality. It has a Philip K Dick take on Death of the Salesman energy, with the salesman in question being one of the first people to work at a company who can 100% accurately predict the day anyone will die. Deeply flawed narrator, lots of philosophy, increasingly weird, loved it.

I read both very quickly. I read Dare to Know in two sittings. I’d take that as a recommendation alone.

Due to being a slow period in my release schedule does mean that the newsletter slows too. Which is tricky, as I don’t really want to stop, but I’m trying to make my brain force myself to use the time on Wednesdays for other things. I’m literally writing a whole RPG system on the side, right? A few hours there can make all the difference.

Speaking broadly, I’ve been ambling through scripts to get ahead, at least in a first draft form and polishing up ones as they’re needed. I counted up roughly this morning, and I think there’s seven or eight first-draft scripts I’ve got lying around which I need to polish at some point. Just… not yet. So I don’t. There are worse places to be.

I also pulled together a full proposal document for another thing. I responded to Chris Arrant’s “Post a mood board for an unannounced project” with this tweet, if you want to get a vibe. It won’t help, I’ll stress. Remember that the last time this happened, I was alluding to working on Eternals by posting an Abba gif, solely because there’s something in the glacial form of mid/late period Abba which makes me think Eternals and the fact they have Ikaris’ haricut. The proposal seems to have gone down well. Once more, I may have distracted editors with sheer size.

I also started a second full playtest of the DIE campaign last night, which got through all the session zero stuff. The phrase “You banged the elf-king!” featured prominently, so I think that counts as going well.

You just read issue #189 of Kieron Gillen's Wordmail. You can also browse the full archives of this newsletter.