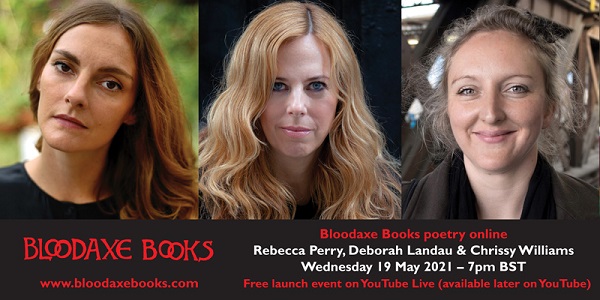 While I’ve got nothing new out this week the larger creative engine of this house has the official launch of her new poetry collection, Low. This builds on Chrissy’s work with her debut, Bear, and Chrissy has the gift of being able to be formally playful about anything, even the very worst things. The concept of play, necessary play, echoes through her, and echoes through this, and a transfiguration-touch which turns anything – Drag Race, Sonic Youth, Murder podcasts, Improv, anything – into a revealing lens. I love this, and think you will too.

The reading is tonight online (may 19th) kicking off at 7pm BST, and with her excellent fellow Bloodaxe poets Rebecca Perry and Deborah Landau. Details of the event are here – ]it’ll be streamed live on Bloodaxe’s youtube channel, and then be able to watch whenever. The book looks like this – yet again, the lovely cover by the always great Tom Humberstone. 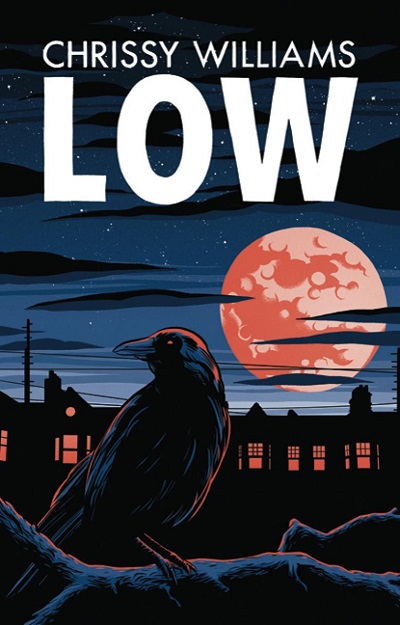 Publisher Bloodaxe provide links to buy it from various buying places (including direct from them) and extracts..

The Daniel Fee invited me onto his excellent youtube channel, and I couldn’t resist. He also said I can link it all here first, so you can be the first to watch. Daniel ask me of all things comics here. It was a lovely time. Daniel does it for i) fun but also ii) to raise money for the National Deaf Children’s Society, which is certainly worthy of your support. 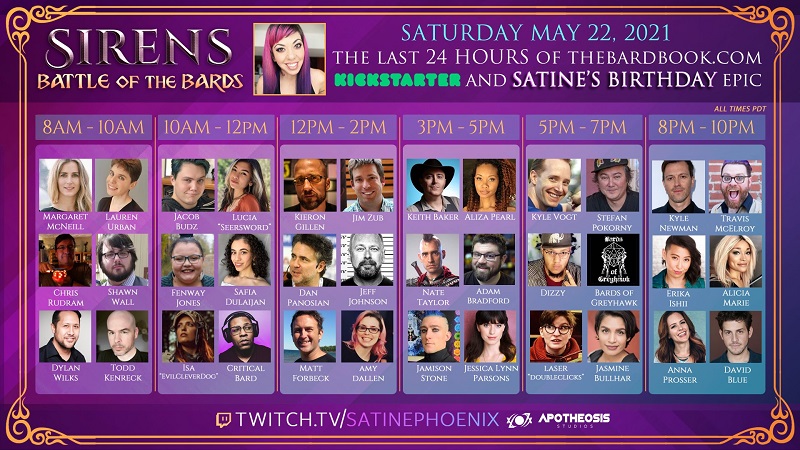 It’s Satine’s Phoenix’s birthday this Saturday, and the last day of her Battle of the Bards kickstarter, and to celebrate she’s DMing all day. Frankly, this sounds painful and I’m tired even thinking of it. She was kind enough to invite me to join a game, which starts at 8pm BST on Saturday. This will be fun, and is all on her twitch channel.

As I’m not actually someone who plays D&D regularly, going and nosing at the rules to make a character for things like this is always a time. I think I’m going to play a Goliath Fighter who is convinced got bardic powers, but tune in to find out.

A quick run through some of the things I’ve been reading in the last month or so.

ONE OF THEM, Musa Okwonga’s short memoir of his time at Eton was excellent. A black child from a predominantly working class area going to a place which is so alien it may as well be Hogwarts is just fascinating, and has a poet’s choice of line. Lots in here,in every way, both about society and the individual travelling through it, which is exactly how I like memoir.

GAMISH by Edward Ross is taking Ross’ critical-essay-as-comics approach as seen in his Filmish to the history of games. It’s an excellent primer, and introduces the complexities about talking about games in an accessible and smart style. I have some reservations at some areas, as it is mostly the Edge Approved History Of Games, which I spent my career fighting a rearguard action against… but that’s me, and very much the sign of someone who had too much skin in this game for a long time. If you find yourself seriously thinking “So… what’s this game thing all about?” I really can’t think of a better place to start. It’s a really strong overview and reminder of why Games are interesting, and I wish it existed when I started writing about games.

I was assembling my Cursed City miniatures and had the powerful urge for weird-edged fantasy adventure, and then remembered I hadn’t read my copy of the THE SHADOW SAINT yet. It’s the sequel to Gareth Hanrahan’s THE GUTTER SAINT, which I enjoyed enormously. It’s maximalist fantasy, full of ideas and imagery, but the one which sticks is how it treats its gods and their saints, something between demonic possession and Tetsuo from Akira. There’s a wonderful moment when flowers bloom across the city, a hand emerging from each, and in every hand grenade… and it’s a throwaway sentence. Exactly what I was looking for. The third part in the trilogy, THE BROKEN GOD, was out this week too.

The DIE Closed Campaign Beta continues, which has been fun to watch what folks are doing with it, and all of is prodding me to tighten up various sections in the manuscript, and focus my attention. That the present Open Beta exists across several documents have diluted this aspect of the playtesting a bit so focus is really useful.

Anyway – I thought I’d give a little stand alone excerpt. This is the current attempt to boil down some key things which are particularly key in GMing DIE, given its dual-world nature. We’ll have more advice about things which are broader and in many games (including safety tools, which definitely should be thought about in context of some of the below – “final say” doesn’t over-rule safety tools, clearly) but this is some core DIE space…

Die dies when we forget that the cast are real people, not fantasy heroes.

Be especially cautious of genre moments.

If the player gets in a fight, ask about what’s the worst fight their persona has ever been in. If the player gets a sword through the chest, stop and ask them what the worst pain the persona has ever experienced… and then say this is just like that, or worse. If a player kills someone, dig into how that feels. Linger on magic. A fireball isn’t an attack. Its a miracle. How do people feel about that? How does that even feel to do?

Linger on the emotional effect of the fantastical.

Persona generation gives masses of information about their real lives. Integrate it into the fantasy world. Find ways to turn their autobiographical details into the external drama.

This can be in the small details, like children chanting the lullaby your grandmother used to sing. This can be in the large scale threats, like a persona’s sense of personal shame being a mountain-sized golem about to crush the whole cities.

How can you turn autobiography into magic? Do it.

Everything established about their real selves, the players have the final say.

The players have complete control of the real world, as far as their own persona goes.

Players get to answer questions and define things in the real world however they wish. Encourage them in this freedom. Be excited by their answers. Be curious who these people are.

“The players” includes the GM. The Antagonist is also a persona, and the GM gets to define the antagonist’s autobiography too.

Everything established in the fantasy world, the GM has the final say.

Conversely, in the fantasy world., the GM has the final say . This is to take the control out of the players hands, and make them unsure of the nature of reality. This fantasy world they are existing grows from the seed of their imaginations, but is fundamentally, awfully out of their control.

This includes the GM’s ability to transfer the agency to the players, in part or in total. This and the previous principle interact in key ways.

The GM can ask what the persona’s childhood home is like. The player answers however they wish.

The GM then can say that the persona have stepped into a clearing, and the house is in the fantasy world. They can ask what the player what in the corridor and each room as the group explores it. The GM can also choose what, if any, details are different.

Speaking broadly, the real world exists as a fantasy and the fantasy world is presented as an external, ultimately unknowable reality. The former makes players instantly emotional invested. The latter is where Die’s creepy magic lies.

There’s a lot going on, and a lot I can’t talk about. It is all a time.

I had the weird magical moment yesterday when I finished a first draft of a script – Once & Future 22 – and then realised it wasn’t due until a week on Friday which gives me a lot of spare space. I’ve started writing the next two issues this morning, thinking that as they’re plotted, as I may as well get ahead on them… but I’ve also just realised I could spend this time on the DIE RPG. As well as the extra time, I want to give it a full concentrated week at some point, to see where it ends up. The present plan is to have a complete enough draft to KS circa the release of the final trade, so there’s certain key areas I want to get closer to completion. The process of going through what exists is quite fun now – I’m seeing whole sections I can just cut now, which is a good thing, as I’m still writing more stuff.

I was going to write a little about Television in the book section above, but I also realise that I want to eat a sandwich. Life is very difficult. Primarily, I wanted to mention BBC3’s Starstruck, a 6-part sitcom which takes the most simple romantic comedy structure and makes it sing. It’s hard to imagine myself more charmed.

Also, Manny’s being more friendly to me in a way that he spends a lot of time meowing aggressively if I don’t stroke him at certain times in his schedule.

You just read issue #188 of Kieron Gillen's Wordmail. You can also browse the full archives of this newsletter.