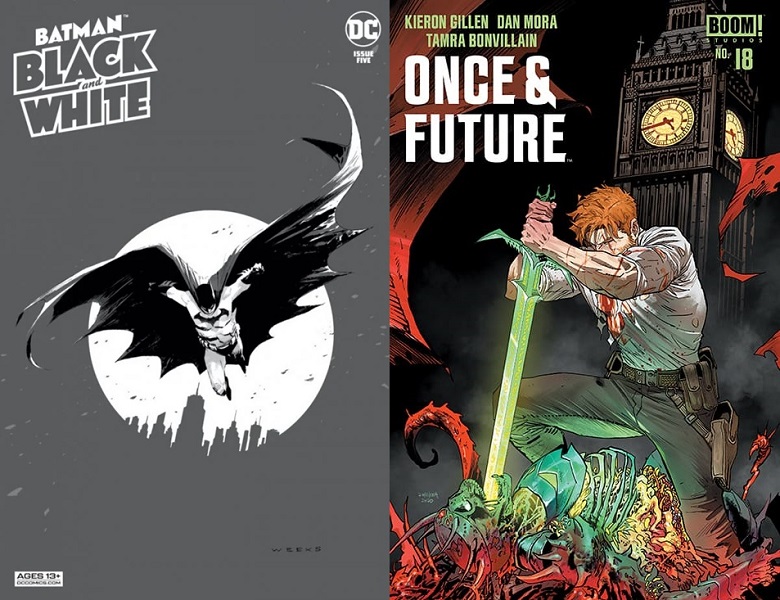 Fun week of comics out. Firstly… 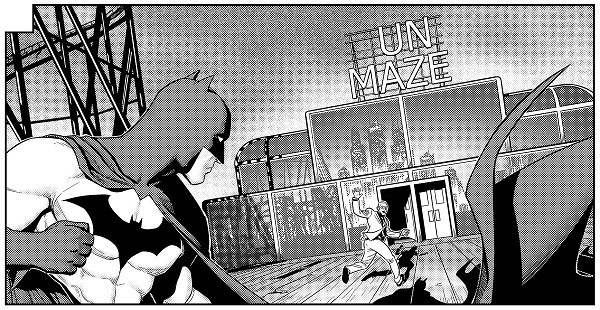 And I feel I have to mention how jpgs distort patterns like this, as I can feel Jamie screaming at the above.

Anyway! Jamie McKelvie and I have a story in Batman: Black & White 5. This is my first ever DC superhero work – there’s a American Vampire short I did a few years ago, but obviously writing the Dark Knight is something significantly different, right?

The main influence on the story was the video for Nik Kershaw’s The Riddle, the Riddler’s first comics’ appearances and trying to break myself and Jamie. I’ll likely include some making of stuff down the line, as there are totally diagrams. This was the sort of difficult to do which is best described as financially prohibitive. As DC’s books come out on Tuesday, the initial response seems to be exactly what we’d have hoped for, which is basically a mix of “delighted” and “bemused.”

We also have Once & Future 18, which is the last issue of the Parliament of Magpies, which is probably the most important – whatever that means – issue since issue 1. It’s possible this could be spoiled, so I’d advise reading quickly if that matters to you. I saw several people say they were a little lost last issue – which is an irony, as I swear the bit that has lost people is where I just explained Merlin’s plan. I probably should have been simpler – but this is very much where things become terribly and awfully clear. That’s sort of a rhythm of me, right? Arcs get more and more complicated, and then things narrow down at the conclusion as we march into a new status quo. 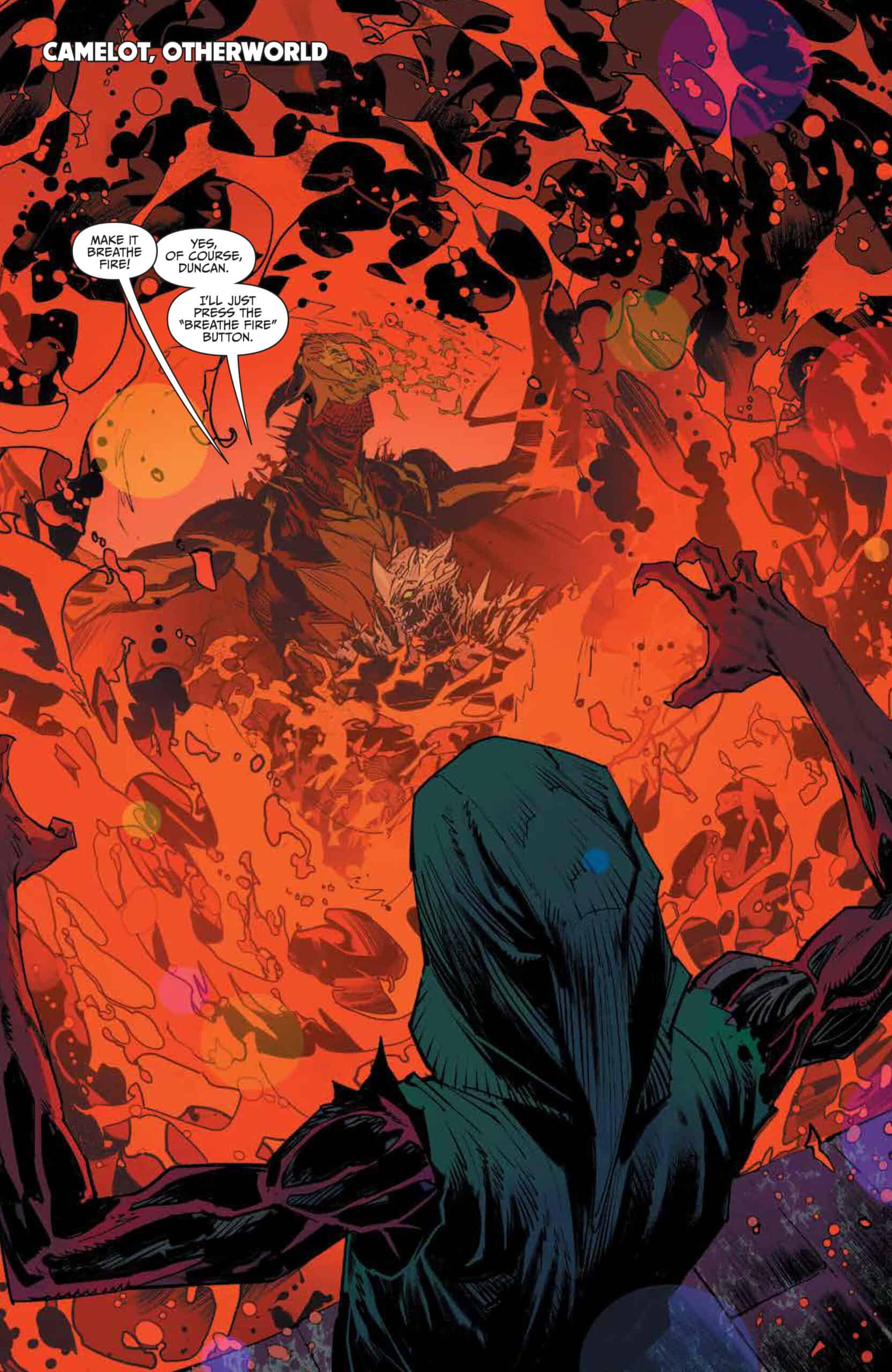 …and the rest of the preview is here.

This is the last issue before we have a little break. I believe we’re back in August, but I’ll keep you updated. 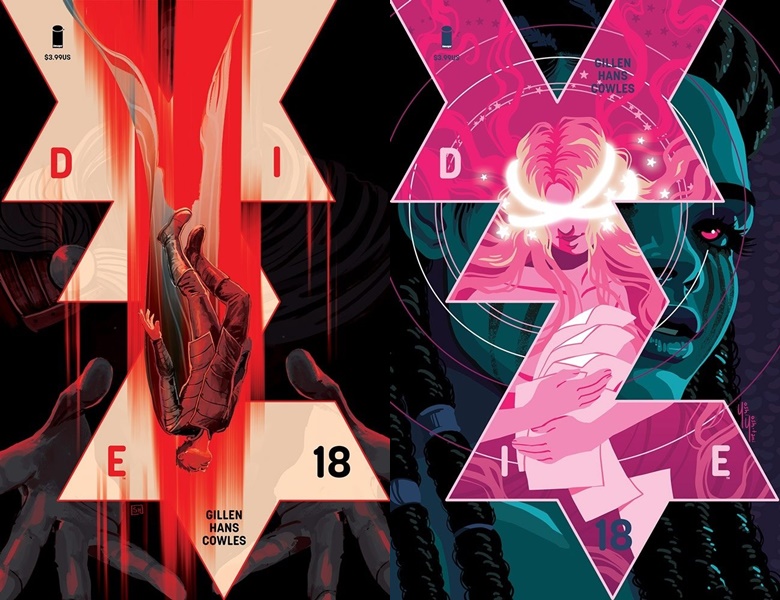 June Solicits are out!

Here’s DIE 18’s solicit, with Yoshi Yoshitani joining us for the alt cover.

Colin Smith tweeting about this panel, the first of our Young Avengers…

…led to me pulling out the script for the panel. 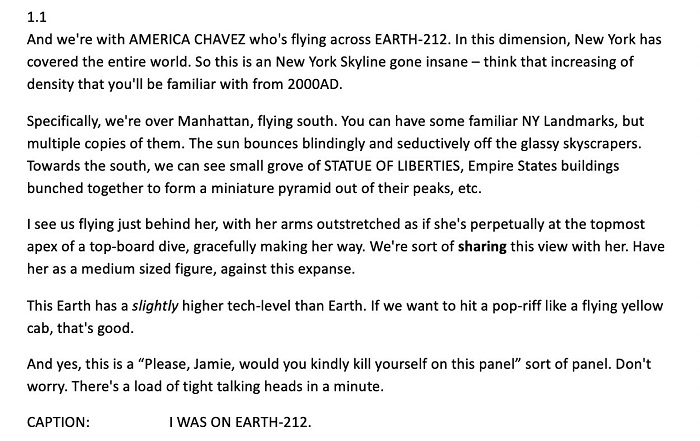 Jamie said on twitter it’s one of his faves, and it’s one of mine too. It’s probably one of the more important panels in our career, in terms of pure “Hello, here we are.” There were another bunch of captions in the full script, but when I saw the panel, I just deleted them. Why distract from that image?

I get the occasional mail from creator friends, asking me for advice on a topic. Last week, Alex Paknadel (he outed himself on twitter) asked me about writing team books, and I downloaded my brief thoughts to him. None of my thoughts are brief. Here’s an edited and slightly tidied version…

After I got the mail I wrote a list of five topics off the top of my head. I’m now going to go in and fill in some details beneath them. Fear the download.

More than any other kind of book, the chance of breaking an artist on a team book is highest. You have a bunch of characters, which often do some stuff together. So you’re writing a 6 person team? That’s 6 people together. They’re in a fight? Maybe another 6 people against them.

So call your shots carefully when they’re together. Don’t call for shots of everyone in the same panel, unless you’re really giving it the space to land for the reader and you absolutely need it.

Worth noting sometimes you do: at least part of the team book is folks want to see a team doing the thing. That said, there’s exceptions to that…

I usually say I learned to write team books by a teenage exposure to ABC WARRIORS: THE BLACK HOLE and BAD COMPANY VOL 2: THE BEWILDERNESS. This is classic 2000AD hypercompression - both explicit team books told in 5-6 page chunks. How did they do it?

ABC Warriors primarily does it by having a team member be the narrator in each episode, and then rotating the narrator between episodes. So you are both introduced to each character, and also (because the narrators are so different) introduced to the perspective of the character who is speaking., This also means this constant reintroduction isn’t in any way boring, because the characters are all so individually warped. You want to know what a sadistic fuck like Blackblood makes about everyone, right?

BAD COMPANY goes the other way, and has a strong single narrator in the form of Danny Franks, and uses them as the perspective we explore the rest of the cast. Some stuff is almost explicitly Franks interviewing team members.

Both speak to an underlying truth – a big chunk of team books are about moving the pieces around in new combinations, and seeing what they do.

I mention Authority, but the first run dose some key basic things of modern team story books – this almost procedural mode was especially popular in the 00s, and is something of a break of the Classic American Superteam approach. Speaking broadly, it does very cleanly some things superteams have always done - you can see where it moves from separating the group (so all team members gets a chance to do cool shit) and then bringing them together (so you get to do the big team book money shots).

But also note that when they’re together in a non-violent scene, someone - usually Jenny - takes lead, and almost everyone else shuts up. You may view this as the Authority becoming a solo book with a supporting cast rather than a true team book when the story demands - that speaks to it being a plot-first book. There’s not really much for the team to debate about - they all know what they’re going to do (kick people in the head, save the world).

TL;DR: Go breakdown some of your faves. How do their stories work?

That’s the main thing, and what all the above do, in various ways. If it’s a team book, characters need to be able to be on panel and do their thing. That it’s being sold as a team book implies that’s the promise to some degree. When planning an issue ensuring everyone gets to do their cool thing for a moment is not a bad perspective to take.

(This is pretty close to running an RPG group, btw. If someone’s not done something for a while, it’s probably time to give them a chance to do something.)

The alternative - especially in a one off - is to make the issue explicitly about an individual. Like the Black Hole, maybe this is just a single character in the team, and about how they work in the team. Of course, the effects do overlap - like in Bad Company, having the story be from an individual’s perspective you get to show how the other people are viewed by them, and so how cool their cool thing may be.

That links to the above - like, what is the book, really?

There’s team books which aren’t really teams - they’re actually ensemble casts. WicDiv was one of them. DIE is much more of a team book - it’s a literal party (with Ash as the main narrator, ala BAD company). Watchmen has one scene when there’s a team, and they’re not called The Watchmen – it is absolutely an ensemble cast. Hickman’s X-men isn’t a team - it’s an ensemble cast (to the level where I think it’s more of a permanent event, or even a social novel). My Journey into Mystery is abstractly a solo book, but at times it became an ensemble book - and even a SERIES of team books, because Loki was always having to put teams together to do stuff. My Uncanny X-men run was primarily an Authority-mode procedural team book, with Cyclops taking the Jenny position and everyone having lots of focus time to do their cool thing (though see later on the exceptions).

The core difference between Ensemble books and Team books is that in a team book “I want to see the people together doing their thing” is part of the promise.

You ever seen Dan Harmon write about Community? Clearly the story circle, but there’s also the sense that most episodes are about dividing the cast into smaller pairs and threes, and exploring that dynamic. This is in a lot of sitcoms, and an approach that 100% crosses over into team books.

5-9 people in a team normally means 7 of them standing around in a blob, with 1 person taking the leader role, and maybe one other takes the person to argue against the leader. Who is arguing likely varies, but it’s normally who feels most strongly about a situation. I suddenly find myself thinking like a team book is a zoom call, and most people are just standing and listening.

So you need to split that up.

Split up a 6 team into two groups of three, and you’ve got proper potential for actual drama. Each scene can be about those people, and by changing up the people you group together, you get to show different aspects of the characters. The Uncanny Run had a core team of nine, which is ludicrous… and when the book isn’t doing the widescreen mode, you’ll see I split the team into 3 groups of 3, and I get to play with all kinds of dynamics.

This is what team books do best, I think – in that you’ve got no single element which “needs” to be there (As in if opposed to you having a group cast around a a daredevil or a batman, readers are still broadly pissed off when you don’t see anything of the lead character). You get to see what emerges from all these different combinations, and then being able to bring them together to do the core TEAM beat when you need that.

Think about the subtext of “Avengers Assemble”. It implies that the Avengers were apart.

Just continuing the weekly Sisyphean routine. Another day, another 5-7 pages of script written and various tasks from the to-do list struck down. The change is the focus – rather than moving between books, I’ve just stayed on Eternals. I’ve went through issues 7 and 8 in a first draft form, and just moved onto 9 this morning. Having a tight plan stretching out has even meant I’ve been doing sketch notes for scenes in issue 11, right? I’m enjoying myself. The characters regularly surprise me, which is a delight. I also went for a walk with friend Adlai, and popped into a shop and discovered these exist… 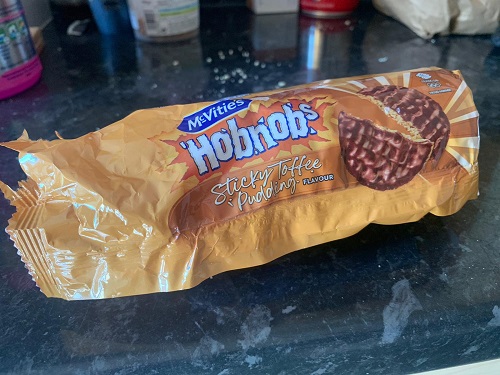 …Which had a weirdly large effect on me. The last year and change has basically me lean into hermitage. I can’t see the point of going anywhere. I don’t really need to do anything. It’s been so extended that I’ve even forgot why I would want to.

You would, if I didn’t, I wouldn’t know of Sticky Toffee Pudding Hobnobs.

They’re not exactly great – I was expecting a layer of caramel – and aren’t going to be replacing any of the other varieties in my heart and/or coating my veins, but that my conception of the world is wider from this very banal experience did remind me of why I’d want to get out more. I had actually forgotten the power of the unexpected.

You just read issue #186 of Kieron Gillen's Wordmail. You can also browse the full archives of this newsletter.