It has been a long while since the last label guide. This time we’re looking at some hardcore deep cuts from the Kill Rock Stars catalogue.

Olympia, WA’s Kill Rock Stars was founded in 1991 by Slim Moon and Tinuviel Sampson, the former explaining to Hit Quarters in 2009: “I just wanted to put out my friends’ records, because nobody was putting out my friends’ records.” He did just that, starting with a spoken word split 7-inch between himself and Bikini Kill’s Kathleen Hanna (her side, fittingly enough: “Rock Star”).

Slim’s tenure (he left in 2006 to become the A&R for Nonesuch Record) includes some of the most landmark punk and indie releases of the ‘90s, including the Riot Grrl-galvanizing Bikini Kill records (though since 2012 the band have reissued everything through their Bikini Kill Records), Elliott Smith’s open-tuned emotiveness (still kept in print by KRS), the wiry guitar freneticism of Sleater-Kinney’s Dig Me Out-to-One Beat era (though those albums were later re-released through Sub Pop), and a six-album odyssey that found Unwound crossing over from ear-splitting emotional punk into an inkier experimentalism (now served up through archivists The Numero Group).

Like all the best labels, Kill Rock Stars is incredibly hard to pin to one specific sound — consider its ventures through indie-twee (The Decemberists), stand-up comedy (Cameron Esposito, Hari Kondabolu), experimental noise-pop (Xiu Xiu, Deerhoof), early ‘00s garage subversion (The Need, The Gossip), and so much more — but these are a few somewhat obscure favourites that push the needle towards the grimiest parts of hardcore.

The Mukilteo Fairies were a Pacific Northwest quartet with a penchant for regionally-specific puns and speedily noise-stricken punk. Their Special Rites EP for Kill Rock Stars followed a demo tape and a 1994 7-inch on queercore hub Outpunk. Special Rites delivered a trim, but tense six songs in just over four-and-a-half minutes.

There’s something wonderfully discomfiting about guitarist Rebecca Basye’s playing on the record, in particular. Her maxed-out treatment of distortion vibes towards a uniquely chirruping, between-chord noise that sounds something like a wayward ghost.

Vocalist Joshua Plague gnarls and spits like a gremlin possessed, whether delivering odes to spikey-haired mosh-hunks (“Four-Letter-Love”), or contemplating fake friends, identity, and the effects of shock-and-conversion therapy (“Ripped Out”). That’d be future ...And You Will Know Us By the Trail of Dead drummer-guitarist-vocalist Jason Reece hammering down those double-time crust beats.

A couple of years later, Josh and bassist John “Quitty” Quitner ended up bashing through an even more demented form of hardcore — alongside the experimental violin screech of Michael Griffen — as Behead the Prophet N.L.S.L.

Josh is also a traveling vegan chef, and released his latest cookbook — Hey Ho Let's Dough!: 1! 2! 3! 40 Vegan Pizza Recipes Unrelated to the Ramones – this past May. 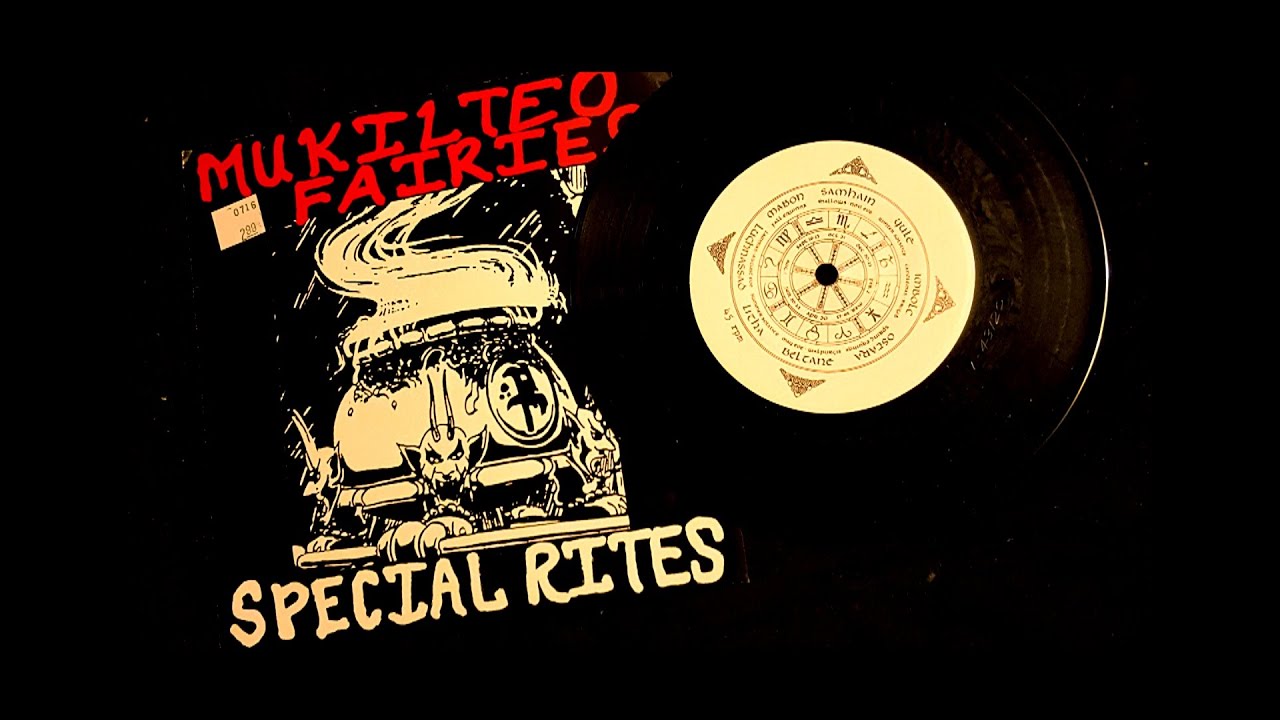 Universal Order of Armageddon – The Switch Is Down (1994)

Though a quote from Universal Order of Armageddon drummer Brooks Headley that I can only source through Wiki has him claiming that the Maryland quartet’s live shows were “like turning on a vacuum cleaner for...ten minutes,” 1994’s The Switch Is Down EP is a record of rhythmic contrasts. Take how it vaults from groove-forward bombast (“Visible Distance”, “Switch Is Down"), to free-form jazz paradiddling (“Clear Set”), to sweat-slicked punk speediness (“Benedict”). The epic “Stepping Softly Into” is another measure of extremes, with most of the band existing in the margins of Tonie Joy’s molasses-thick guitar sludging — until they all rise towards a psyche-damaging full-band trepanning.

There’s an extended discography release sharing similar artwork to The Switch Is Down – a smudge-focus, high contrast image of trees – but to be honest, I only really know the material from the EP.

Seems only fair to mention Brooks Headley is an award-winning pastry chef, and restaurateur. Though he closed his East Village Superiority Burger in 2021, the vegetarian burger bar is set to return to New York sometime soon.

There is a lot of Kill Rock Stars interconnectivity around early '00s Los Angeles hardcore quartet Wrangler Brutes. Brooks Headley drummed in the aforementioned Universal Order of Armageddon; he had also played with vocalist Sam McPheeters in crucially influential politi-core satirists Born Against, whose full catalogue had been re-released by Kill Rock Stars as a pair of compilations in 2003. While not a KRS connection, per se, the band also featured former Monorchid/Glass Candy bassist Andy Coronado moving over to guitar.

Zulu was the follow up to Wrangler Brutes’ staggeringly excellent 2003 demo (which was later repressed in 2005 by the Vancouver-based, ironically-monikered Clarence Thomas Records on the most impractical format of all: double 8-inch). Like its predecessor, Zulu is an aggressively weird release.

Coronado’s Post-Ginn six-string nastiness is riddled with atonal scale-climbs, shivers-inducing surf guitar texturing, and slapdash, power chord cram sessions. McPheeters delivers a tour-de-force vocal performance via absurdist, yet straight-faced takes on anything from the high cost of gas (“$45”) to getting stabbed by your financial advisor mid-way through discussing your portfolio (“Shank’d”). The voice of God (a.k.a. Circle Jerks/Off’s Keith Morris) also appears mid-way through an abrasive, yet pensive salvo on highway gridlock (“Driving”).

This is how I put it in my local alt-weekly, the Georgia Straight, back when I placed it in my Top 10 for 2004:

Wrangler Brutes bring back a sense of fear and confrontation that's been missing from punk since those kids and the baby-eating dogs moved out of that house in Suburbia. Singer Sam McPheeters snarls, screams, and stutters like an aggro Porky Pig overtop a brand of circus-styled hardcore that finally adds something to a now 20-year-old formula.*

* If you’re wondering about the math on this, I could be thinking in terms of an arguable peak to the first wave of American hardcore? It’s been almost 20 years since I wrote this, though, so who’s to say!

Mika Miko were part of a mid ‘00s boom of punk kids performing and volunteering at Los Angeles D.I.Y. venue The Smell (the last time I passed through there in early ‘08, I think half of the band were either working doors or concession).

At the front of the stage were vocalists Jen Clavin and Jenna Thornhill. They often worked a punchy, tandem vocal attack, but solo turns on the mic could find Thornhill arcing from piercing shrieks towards a lo-and-‘tude-laden Dracula's drawl (see debut album C​.​Y​.​S​.​L​.​A​.​B​.​F.'s "Take Hold").

The rest of Mika Miko were just as outlandishly energetic. Between drummer Kate Hall’s frenetic four-on-the-floor work and guitarist Michelle Suarez’s derelict, high-string spiralling, “Business Cats” and “Capricorinations” deliver some of the rawest dance-punk of the era; snarlier slams like “End of Time” and “See You There” conjure vintage L.A. hardcore, a la pre-teen era Redd Kross; effervescent closer “Oh, Head Spin!” sounds like a cola-jolted “We Got the Beat”.

C​.​Y​.​S​.​L​.​A​.​B​.​F. was Mika Miko’s only release through Kill Rock Stars. Not too long after they issued 2009’s We Be Xuxa, via Post Present Medium, the band broke up. Jen and bassist/sister Jessie Clavin formed pop group Bleached in 2011. Their latest album, Don’t You Think You’ve Had Enough, was released in 2019

You just read issue #73 of Gut Feeling. You can also browse the full archives of this newsletter.