Sometimes I forget what's in the archive. A while back I was looking at an old interview with Hella — the experimental rock duo of Spencer Seim and future Death Grips drummer/producer Zach Hill — that I'd done for an issue of Skyscraper magazine back in 2004. I was thinking that could be a cool piece to reprint as a rewind post...but then I remembered I actually had an unpublished interview hiding on a hard drive somewhere, too.

This second interview took place in 2005, greenlighted by my editor at The Georgia Straight a couple of months before Hella were coming to town on an arena tour, opening for System of a Down. It's kind of a hybrid piece, also taking into account a headlining show Hella had played in Vancouver earlier in the summer, in their then-new four-piece configuration. This version of the band was short-lived, though Hella further explored full-band dynamics on 2007's There's No 666 in Outer Space, which brought guitarist Josh Hill, bassist/keyboardist Carson McWhirter, and vocalist Aaron Ross into Zach and Spencer's orbit.

It's been pretty much 17 years to the day since Hella's arena show in Vancouver, so the timing felt right to put this out there. And going by something Spencer posted earlier in the year, a remastered, bonus track-loaded 20th anniversary of their debut album, Hold Your Horse Is, could be on the way. Hopefully so!

While lightly edited, this is largely how it read back in 2005.

The solo album often exists as an ego boost, made to escape the democracy of working within a group setting. For Hella’s Spencer Seim and Zach Hill, however, the process of making records apart from each other — though released together under the Hella banner as Church Gone Wild/Chirpin Hard — offers a wide-lens look at the California eccentrics’ ongoing musical partnership.

“We both do a lot of recording on our own,” Seim explains of the project’s beginnings from his home in Nevada City, CA. “We thought [making solo albums] would be a fun thing to do, to see where we’re both coming from. We both have such a different approach to music.”

Hella’s new double-album follows a pair of full-lengths and a smattering of EP’s that were full of panicked, song-length drum fills and fearlessly skittish guitar lines. Church Gone Wild/Chirpin Hard still hints at the duo’s broader discography, but working outside of the tandem — not to mention their usual set-up of Seim on guitar, Hill on drums — highlights the unique sensibilities within each player.

Chirpin Hard, performed entirely by Seim, is quite playful in nature. While contextually the more pop-leaning part of the diptych, Seim’s side still finds the multi-instrumentalist exploring the quixotic spirit of Hella. Among many highlights, shredding guitar solos and Casiotone sirens blip through “Try Dis…”; “W” brings a western gallop to krautrock hypnotism; triumphantly chip-tuned lead-off track “Gold Mine, Gold Yours” — perhaps inspired by Seim’s work with Nintendo cover band The Advantage — could easily be mistaken for a long lost Castlevania theme.

“We didn’t hear each other’s records until [they] were put out. I didn’t know he was going to put vocals on it,” Seim says, insinuating how the grand majority of Hella tracks are instrumental. “That was a rad treat.”

Though happy with the results, Seim and Hill were then faced with the task of recontextualizing each other’s solo songs in a live setting. The duo have since expanded the bare bones, drums-and-guitar setup to include two other musicians. “It’s been interesting trying to figure out how to play those songs with a band, replicating those little hits and weird explosions that happened on the recordings,” Seim explains.

Live, Dan Elkan — who had previously sung on a track from the group’s 2002 EP, Bitches Ain’t Shit But Good People — handles synths, guitars, and vocals; Jonathan Hischke [Flying Luttenbachers] plays bass. The four-piece lineup’s recent show at Vancouver’s Lamplighter demonstrated that the new configuration has only added to the intensity of Hella — Hischke, for instance, beefed up older Hella songs like “Hello Great Architect of the Universe” by blazing up and down his bass frets with prog rock intensity.

Seim is excited about what Hella are doing with the expanded palette, but nevertheless felt odd teaching folks how to perform the personalized touches of Chirpin Hard. “I feel like a jerk showing someone some stupid guitar part I made up,” he notes. “Even though I like how it sounds on record, it’s weird showing this other amazing musician this funky part that I recorded in my home studio.”

Hella continue touring through the rest of the year, arriving back in Vancouver on September 17 when they open for System of a Down at the Pacific Coliseum. Hella’s music may not be tailor-made for a stadium crowd — even Seim notes that the headliners might regret bringing them along — but the band are optimistic that fans of radio rock’s strangest nu-metal force will find something to love. “I think a lot of [System of a Down’s] fans are music nerd oriented,” Seim suggests, adding dryly, “I think they’ll have a much more open mind than if we were out with C+C Music Factory.” 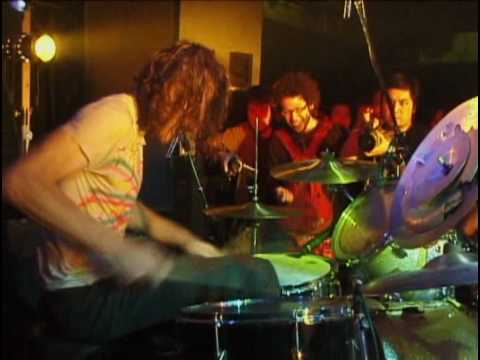 You just read issue #74 of Gut Feeling. You can also browse the full archives of this newsletter.