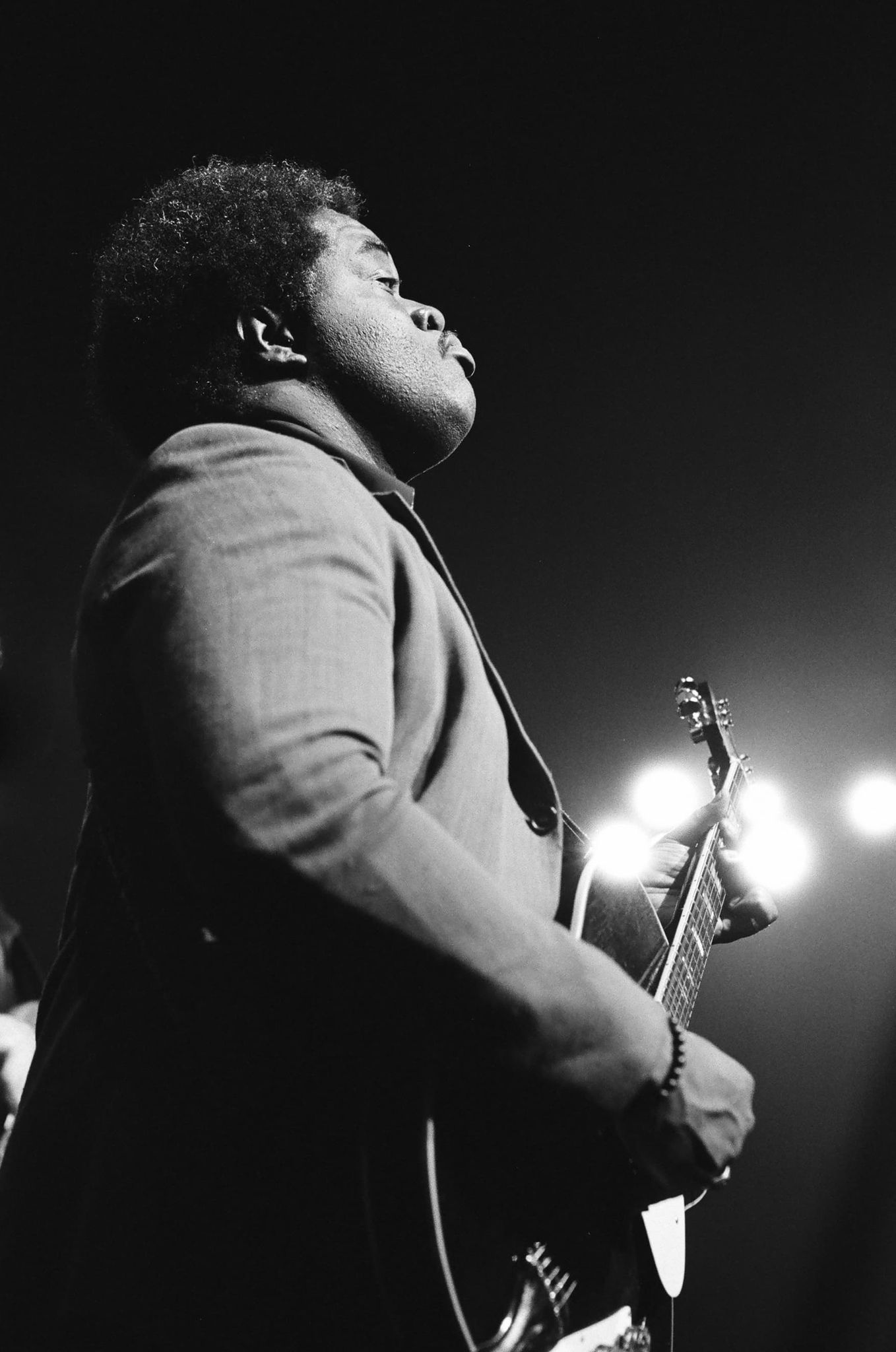 Jimmy James is a lifer in Seattle’s independent music scene, having slung soulful six-string licks across countless projects for close to two decades. Most recently, he’s been pulling double duty as the lead guitarist for both the trim-but-triumphant Delvon Lamarr Organ Trio, and the eight-piece True Loves. Both bands have new albums out in 2021, with DLO 3 having dropped their I Told You So back in January, and the True Loves set to release their Sunday Afternoon on May 28.

Jimmy’s style is both sly and vibrant, a just slightly gain-dusted tone achieved through his streamlined guitar-to-amp set-up; expressive, even when using restraint. On I Told You So, his leads run from a pentatonic percussiveness (“Call Your Mom”) towards wide open waggling (“Fo Sho”), but he also maintains an electric symbiosis with band leader/organist Delvon Lamarr. As for the True Loves, early previews from Sunday Afternoon like “Did It Again” and “First Impression” mesh a lush, four-piece horn section with Jimmy’s sunny, staccato plinks.

Speaking with Gut Feeling, Jimmy got into laying down stylish runs with a vintage Silvertone rescued from a garbage can, his less-is-more aesthetic, and cracking off a Wham! classic with a soulful twist

Listening to the Delvon Lamarr Organ Trio record, and the previews so far from the True Loves record, you’ve got this nice, classic, crisp sound—light gain, some reverb. Is that all amp?

Jimmy James: It’s just the guitar straight to the amp, that’s it. No effects processors or any pedals. Not knocking it—everybody can use their pedals as they want to— but I like the sound of the guitar itself. I mean, I’ll use effects pedals every now and again, but 99 per cent of the time I just want to hear the guitar as-is.

I’ve got this amp by a guy named Scott Strange, from Templo Devices; he hails from Victoria. He made me this amplifier [a custom Jimmy James Rambler]. I just put all the controls up and play with it wide open, I guess you’d say.

How did you get introduced to that amp maker?

J: True Loves came up to play this Roots and Reggae fest in Victoria, B.C. He came to the show and was like ‘Jimmy James, I didn’t even know you were going to be here!’ Most of the time I’ll have somebody subbin’ in for me in the True Loves, because I’m always out on the road [with the Delvon Lamarr Organ Trio]. He didn’t know I was going to be there [at first], but he showed up with the amplifier— ‘Hey man, I want you to try it right after the show.’ I’m usually not a solid state fan, but this worked out for me. I love it.

Is there a built-in tremolo effect in this amp? In particular, I’m thinking of the tone on a piece like the Delvon Lamarr Organ Trio’s “From the Streets.”

J: No, not on this one. The amp I was using [on that track] was a Peavey Delta 115, that has the tremolo in it. Unfortunately it’s been in the shop for a while; it actually crapped out after the recording session. The repair guy has been trying to fix it forever. Something keeps going wrong with it, and he doesn’t know what it is. I used to use on the road, but the repair guy was like, ‘Hey man, you can’t take it on the road anymore.’ It’s so sensitive; it can’t take the jostling. I had to just keep it as a studio amp. When I go on the road, I’ll use a Fender Hot Rod Deluxe.

What have you got going on, guitar-wise? You’ve got an Archtop on your lap right now—How long have you had that?

J: I’ve had this for at least six years. It’s just a Silvertone, the same guitar you could find in the Sears-Roebuck catalogue. They were the cheap models. If you were poor and couldn’t afford a Fender or a Gibson, these would be the next best thing.

The first guitar I ever owned was a Harmony; it’s made by the same company. I was never a hollow body fan, but those [the Harmony’s] were the guitars that made me fall in love with them. The funny thing about this guitar, the story behind it was that the guy who fixed it at the guitar shop actually found it in a garbage can on its way to the dump. He saved it just in time. I called around and said, “Man, I want to find a Harmony.” The guitar shop down the street—which is no longer there—said, ‘We have a SIlvertone!’

With this thing, I’ve recorded everything from when it was Grace Love and the True Loves, to the True Loves, to DLO 3, to one of the songs I did with H.E.R.—She did a song called “Slide,” I’m playing on that. It went platinum, and then double platinum. I’m not trying to gloat or toot my own horn, but this right here [ed. lifts up a record plaque]— I got my first platinum record!

Beyond that, I’ve done stuff for Kelly Finnigan and some other people. I just go in there, and I’ll try every other guitar, but I keep coming back to this one.

To that point, you’re playing this guitar on that song with H.E.R., in the True Loves, and with the Delvon Lamarr Organ Trio. Are you considering different elements of soul and funk styles as you’re powering around these different formations? True Loves, you know, has a large horn section, whereas the Delvon Lamarr Organ Trio is just organ, drums, and guitar. Is there a different kind of spatial awareness in how you want to sit in the mix?

J: It’s just a matter of how you approach certain things, the restraint or voices you might use.

On a Delvon Lamarr Organ Trio song like “Fo Sho,” there’s a lot of trading off between yourself and Delvon, in terms of who’s leading the song. You start one section with this wide open vibrato and these gigantic bends, but then you pull back to let Delvon do his thing. What can you say about knowing when to cook it up front, and when to relinquish that control?

J: It’s all about using your ears. Less is more, you know? You’re there to serve the music, not yourself— that’s always been my philosophy. If we’re in the Olympics, and we’re all running the race, I stay in my lane. If I get in yours, then you trip over me—and then we’re all tripping over each other. He’s staying out of my way, I’m staying out of his. Not in a bad way, though.

Touching on that “less is more” quality, there aren’t really any overdubs on DLO 3’s I Told You So, except maybe this one part on “Right Place, Right Time”…

J: It’s not even an overdub, actually. We’d invited some guests, [that’s] our friend Ben Bloom. He happened to come in and we had this tune— ‘Come on in!’ He played that lead part, and I did the call and response. No overdubs on that one, at all. We just go in there and knock it out very quickly.

With your cover of Wham’s “Careless Whisper,” it’s a cool twist— transposing arguably one of the most identifiable saxophone hooks of the last 40 years of pop music onto your guitar. What was the idea behind re-contextualizing the hook? It gives the song a different flavour; there’s a different timbre, or warmth to it.

J: My late sister used to play that song a lot. Like, I remember hearing it as a kid. Every now and again when we would play a show, we’d be sitting around and I’d just [play the hook]. We kept messing with it, so Delvon was like, ‘you know what, I’ma learn it.’

We were playing in London, England [and when] we played that song the crowd went absolutely nuts for it. Our manager kept saying ‘you guys should record that song!’ Delvon was looking at me, like, ‘Should we?’ I said sure, why not.

We didn’t know what the reaction would be. Like, ‘They’re playing that 80s song?’ Most saxophone players will not play that song. It’s like “Stairway to Heaven” for guitar players, or “Freebird.” So I said ‘Screw it, I’ll learn it on guitar!’

We slowed it down from where it was on the original. I wish George Michael was here to hear it. I wonder what he would think; we would invite him onstage to sing it.

There’s still the other guy from Wham…

J: His name is Andrew [Ridgeley]… I hope he digs it; I hope he’ll hear it. Can’t say much on that, though.

The Delvon Lamarr Organ Trio’s I Told You So is streaming on platforms now, while the True Loves’ Sunday Afternoon sees release May 28.

You just read issue #31 of Gut Feeling. You can also browse the full archives of this newsletter.