While the gearhounds obsessively refreshing the front page of Reverb.com would disagree, Heaven for Real’s new video for “Do Your Worst” posits that a good guitar is rarely hard to find.

Up front, it finds a group of would-be musicians on a beach, widdling away on their air guitars before realizing that something's missing — namely some sick six-strings. Once an omniscient subtitle suggests you can find guitars “all over the place,” Heaven For Real’s brotherly duo of Mark and J. Scott Grundy start sprinting through Toronto to pluck vintage pieces — including one particularly stunning, yet well-worn, azure Supro — out of trees, tunnels, dumpsters, and train stations. They get back to the beach to share the bounty, then everyone — despite the absence of any of these sounds on the studio track — starts wilding out with double-handed tap theatrics while duck-walking through the sand.

“It’s definitely a gear-focused vid,” Mark concedes, but even outside of the maximalist aesthetic of the “Do Your Worst” video, the band’s upcoming sophomore full-length, Energy Bar, may well be Heaven For Real’s most string-intensive experience yet. You can hear that through the lush, if manic 12-string psychedelia of “Do Your Worst,” as well as the butterfly-fluttery, string-skipping hammer-on technique Scott brings above the acid house beat of the record's other sneak preview, “Slow Clap".

“I feel like it is a guitar-heavy record, even though we probably [thought it wouldn’t be] when we were making it,” Mark continues. “There are tons of overdubs; Scott’s riff on ‘Slow Clap’ has some hammer-ons that feel like a new approach to playing.”

Speaking with Gut Feeling, Mark and Scott further went in on the big riffs and vintage neckthroughs that went into their Energy Bar, and the character-filled custom piece they regret letting slip out of their collection.

How many of the guitars from the “Do Your Worst” video are part of your personal collections?

MARK GRUNDY: Oh, all of them — split between Scott and I.

J. SCOTT GRUNDY: There’s a scene where we’re running through the woods, and I could be mistaken, but I’m carrying my collection and Mark is carrying his collection. 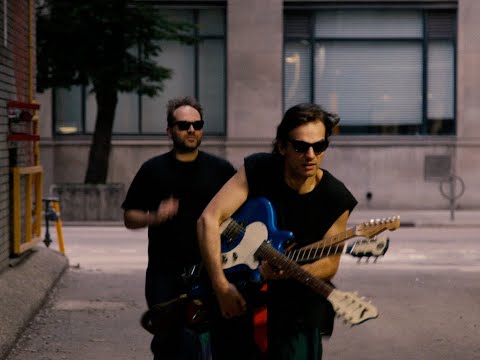 Heaven For Real - Do Your Worst (Official Music Video) - YouTube

Heaven For Real - Do Your WorstFrom the album “Energy Bar” Out September 16, 2022 on Mint RecordsPre-order: https://mintrecs.com/store/energy-barBandcamp Pre…

While it only takes a matter of moments to start filling your arms up with instruments in the video, how long did it take to build up your respective collections in real life?

MARK: It’s funny to think of it that way, but many years. These guitars [came] from the various cities we’ve lived in. The one I was playing the most in the fake-shredding section of the video is one I’ve had for a decade. It’s a ‘60s Fender Mustang, and I got it from this guy in Nova Scotia named Dave Marsh. Scott, where did you get the Supro from?

SCOTT: That’s from a vintage pawn shop in Kingston, [Ontario]. I was only there the once.

Going by the general body shape, is that a Suprosonic S30 or an S430?

SCOTT: What I can tell you is just anecdotal. It’s blue [but] I think it was originally red — I didn’t paint it. Also, I took off the original pickup and lost it promptly. The guitar is from the ‘60s, though.

MARK: One time we found an old catalog for Supro, and we saw it in there. It's not a super common one.

What pickup did you swap into it?

SCOTT: It was actually a pickup from one of Mark’s guitars.

MARK: It was [originally] from the guitar that was up in the tree [in the “Do Your Worst” video]; we took a pickup out of that and put it in the Supro. That pickup was made in Vancouver. I don’t know if the company still exists, but it was called Reilander. For a time they were like a coveted, hand-wound [pickup].

We’ve used that green guitar on many of our records; that’s the main guitar Scott’s used. Like, that's the guitar on "Subliminal," the first song on [2016 debut full-length] Kill Your Memory. I love the sound of that pickup.

What keeps bringing you back to that green guitar?

SCOTT: It’s not really a live guitar, but we’ve kept it around. Of course, there are amps and pedals you can tweak to get your sound, but we’re starting with this old guitar. We used it five years ago — it’s kind of going to sound the same.

MARK: It’s not actually old. It’s a reissue of a Stratotone from when Harmony was sold — they revamped the company in 2007 and made a bunch of Korean replicas of their most famous models. This is a Richie Valens edition of the Stratotone. It’s forest green, because he had painted his forest green in his woodshop. The Stratotone is one of the most expensive Harmony’s. The little student models [were going] for three grand or more when I was trying to buy one. I got fixated on it, and learned a lot about the brand.

Putting this [Reilander] pickup in was my first time fully swapping out the electronics on a guitar. To go back to your question, the fact that it’s in the neck position, but it’s a trebly, jangly sort of pickup, makes for an interesting sound. It gives the guitar a good, really present mid-range. We have a Strat and some other guitars that do lots of different things, but that one’s special because it’s this super mid-focused sound. Another thing that’s really sick about this guitar is that it’s a neckthrough. The sustain is weird because it’s got a super small, but really thick neck.

For a lot of years, we really relied on the Mustang. It’s the most solid live guitar we have — we toured Japan with that — but because the pickups are old, it doesn’t sound like it has much of a punch. It sounds too jangly in a studio setting. We never record with it.

How studio accurate is the “Do Your Worst" video? Did you use that Supro for the solo, Scott?

SCOTT: The Supro sat under a couch for a really long time [laughs]. It’s not on the record. For that song we used a Gretsch 12 string, but it’s not showcased in the video.

The video showcases all these guitars, but none of you are plugged into anything as you’re jumping around the beach. What was the amp set-up like in the studio?

MARK: Scott has this amp he was obsessed with having on this record. It’s awesome, but finnicky.

SCOTT: I have this old Fender Twin that I got when I was 19 — it’s worked at times, and not worked at times. We used it on most of [Energy Bar], but it started to malfunction, so we had to get it out of there.

As you mentioned, you’re running through the forest with all these guitars around your necks or in your arms. There’s one shot where you pop back onto the beach, and, Mark, it cuts away just as it looks like you’re about to bail and drop one of the guitars. Did any of these instruments take on any damage during the videoshoot?

SCOTT: The bottom strap screw ripped out of that Supro.

MARK: I was able to recover from [stumbling], luckily, but that was one of the closer calls. One stupid thing we did was we left an American Strat just chillin’ on the road in downtown Toronto way longer than it should’ve been left on its own. I think I left the Strat there, and our friend Mark [Corless], who made the video with us, left a really crazy lens [on the street]. We left them and went to shoot something around the corner. So dumb.

SCOTT: It was Sunday, though…

MARK: Still, just casually leaving thousands of dollars in gear [unguarded] so flagrantly…I felt like such a fool. Luckily no guitars were harmed in the making of the video, aside from the Supro. I feel like that [strap] was ready to go, though. It was held on by a beer bottle cap.

Outside of the video, any big gear disasters for Heaven For Real?

MARK: At different times in my life I’ve had my amp not work for the first note of the first song [of a set], even if it worked at soundcheck. I feel like a lot of versions of that are blending together [in my mind].

SCOTT: If you ever have a guitar that has a unique custom paint job, don’t sell it to someone who says they’re going to restore it to its original [finish]. An early guitar I had was this Gibson ES-175 from the ‘90s. I got it in Ahmerst, and it had this custom purple sunburst with a big demon graphic painted on it. And it had some other cool charms. It was one of a kind, really. But like I was saying, I was young and sold it to this guy in a money-and-trade deal — not much money, [along] with some boost pedal that I lost. Or maybe you have it, Mark?

SCOTT: The thing is, they restored [the guitar] back to its original [finish]; they shaved it down. They sent me photos, and they had stripped the demon image and the purple sunburst down to the natural wood. I don’t know what I was thinking [by selling it]; it was a huge fumble. 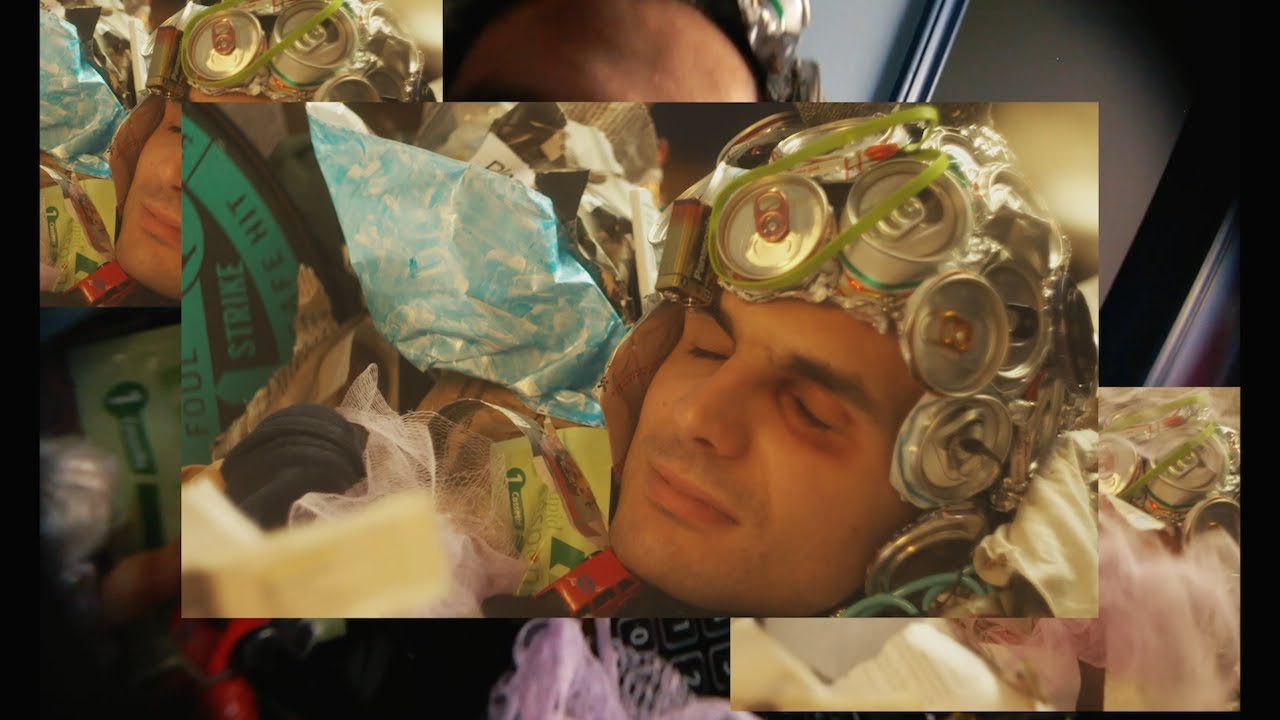 You just read issue #72 of Gut Feeling. You can also browse the full archives of this newsletter.