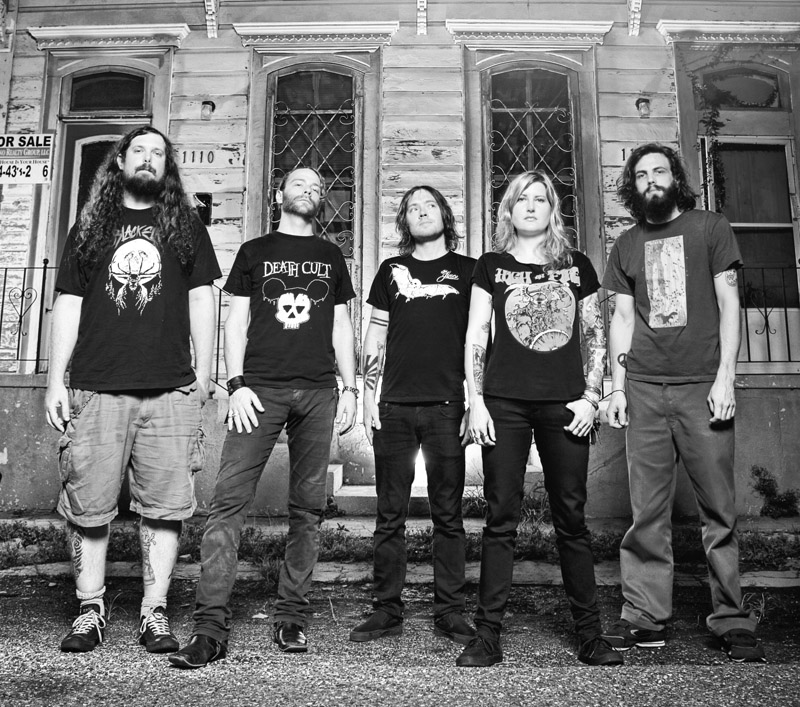 Kylesa circa the mid 00s

This week we’re rolling with another rewind piece, this time looking back on Savannah, Georgia metal force Kylesa.

I’d interviewed guitarist Laura Pleasants back in 2007, just as the band were about to hit Vancouver’s Lamplighter during a tour around 2006’s supremely crushing Time Will Fuse Its Worth. The piece fell through the cracks at the time, though I did get to interview guitarist Phillip Cope a couple of albums later.

Laura is currently making music with The Discussion, whom last released their “Deathtripper” single in 2020. Kylesa, meanwhile, have been on hiatus for the past five years, but recently repressed some old t-shirt designs.

With Time Will Fuse Its Worth coming up on its 15th anniversary later this year, I figured it’s about time to put this one in the wild. Enjoy!

Kylesa fans have come to expect some gnarly imagery from the Savannah, Georgia group. Their records and T-shirts tread on the darker side of life, often being graced with legendary metal artist Pushead’s creepy, skeleton-obsessed artwork. With gloom often attached to the band’s aesthetic, it’s jarring, then, to see the act comingling with seemingly adorable Claymation characters in the music video for their “Hollow Severer.”

“Were you expecting skulls in the video?” guitarist Laura Pleasants says with a laugh.

Looking somewhat like a vintage Sesame Street interstitial, the animation seems pleasant at first. Things take a turn for the worse, however, once a group of globular characters are ushered into a building to be brainwashed by a sinister Plasticine devil.

Psychedelic footage of the band pounding out the tune in front of movie projections are cut with the animation sequences, as guitarist Phillip Cope grunts out a glib message: “Swallow the bitter words. Silence is never heard.”

“The idea behind the song is that everyone is a target, especially with the media,” Pleasants explains from her Savannah home. “Everyone falls in the same line and does what they’re told to do blindly.”

Like most of 2006’s Time Will Fuse Its Worth, the song takes an amalgam of musical styles, both brutal and delicate, into the mix.

“We’ve got lots of different influences that come from other things rather than just metal or hardcore,” Pleasants notes. “In order to remain an important band you need to continue to push yourself.”

Fittingly, “Ignoring Anger” twists and turns from its jaunty, twinkling piano intro towards a plodding mosh riff, and then soars into a centrepiece of New Wave of British Heavy Metal-styled chops before drifting back into more mellow piano chords.

In addition to the constant musical changes, the shared screaming duties between Pleasants, Cope and the low growling of bassist Corey Barhorst keep Kylesa’s tunes compelling. The throat shredders play a game of pass the mic on “The Warning.” Cope rasps tunefully along the bar chords of its verse, while Barhorst’s demonic howl dominates a Sabbath-styled section. Pleasants mans the midsection with her equally in-need-of-a-lozenge wail.

“We had never really sung in a band before,” Pleasants admits of the trio. “It’s cool because I don’t think any one of us is a particularly strong vocalist so using the three of us, we can get different sounds.”

Furthering the group’s aural audacity are the doubled up drum kits of Carl McGinley and Jeff Porter. Though focusing more on the group’s overall heaviness than Grateful Dead-issued wankery, the percussionists get to cut loose on the album’s last cut, appropriately titled “Outro.” For two minutes the pair mangle their kits recklessly with complex counter rhythms before a final gong hit makes way for an eerie wash of horror movie white noise.

Kylesa’s current masterpiece has had them touring since the album’s release last fall. While the act loves going out on the road, performing music isn’t an all consuming experience for the five-piece.

“I wouldn’t want to be on tour all the time because that’s just too wearing,” Pleasants notes.

Until she packs her bags for their upcoming trip, the six-stringer will be enjoying the normalcy of her downtime in Savannah. “I have a pretty cool situation where I can work at an art store in town when I want to,” she says. “I work on the third floor where they do a lot of canvas building; carpentry kind of stuff.”

“We do enjoy touring, and we tour a lot, but I think the downtime is pretty crucial to remain sane.”

You just read issue #32 of Gut Feeling. You can also browse the full archives of this newsletter.