There’s nothing quite like the feeling of breaking in a new guitar. For Creeping Death guitarist Trey Pemberton, that means chunking through resplendently rotted-out death metal riffs as much as it does front-flipping into the mosh pit with your six-string slung precariously low. He accomplished both while giving his hand-crafted, royal purple TW Smith Challenger its live debut at the Wrecking Ball Metal Madness fest in Dallas, Texas this past weekend.

With the new guitar came the announcement that Trey is also the first officially sponsored artist for New Jersey’s TW Smith Guitars, a father-and-son operation founded in 2008. While shaped similarly to the pointed LTD EX-401s he’d pummeled through 2021’s The Edge of Existence EP — themselves descendants of Gibson’s iconic Explorer series — there’s a plush appeal to his latest guitar's slightly rounded contours and quilted purple finish. That said, Pemberton praises the Smith’s suggestion to install a biting, metal-ready Seymour Duncan Nazgul pickup in the bridge position — hot-rodding the offset for maximum heaviness.

How did you first find out about TW Smith?

TREY PEMBERTON: So, TW Smith is run by Tom Smith Sr. and Tom Smith Jr. Tom Jr. used to play in the band the Acacia Strain, so that’s how I met him [ed. Creeping Death and Acacia Strain toured together in early 2020, though the trip was cut short because of the pandemic]. He basically stopped playing in the band to help his dad full-time with the guitar company, because they’re trying to expand. Instead of just being a boutique company, they really want to become a big thing.

One of the first things [Tom Jr.] did after he left was hit me up. He told me, “Hey, we’re trying to build this up, we don’t have any artists but we’d love for you to [join].” I was totally down for that because I was familiar with the work. When we were on tour, Tom let me hold his guitar and play it. I was like, “This is fine craftsmanship,” and he was like, “Yeah…my dad made this!”

Like you mentioned, you’re the first TW Smith artist sponsor outside of the family proper. How does it feel to have that fresh of a start with a guitar company?

I think it’s awesome. I like the fact that I’m here on the ground level — when they’re huge I can be like, “I was their first artist!” And the quality of the guitar just speaks for itself. Inevitably, people are going to figure it out: This is legit.

And our band is trying to come up, too. We’re [both] trying to build our name, so that’s perfect. We’re all trying to grow together.

The TW Smith Challenger model you’re rocking has an Explorer shape similar to the ESP LTD EX-401FR’s you’d been playing in the past. What draws you to that offset body shape?

I mean…I just think it looks cool [laughs]. It’s my favourite shape. It’s super clean. It’s also super comfortable to play. I always lower my strap, because I’ve got long arms, and the way it falls on my body is perfect.

How in-depth were you through the build of this?

They really helped walk me through it, because I’d never really gotten that in-depth about wood types, or stuff like that. When they were like, “Hey, what kind of wood would you like it made out of?” I was like, “Bro...I have no idea.” Tom Jr. is familiar with [Creeping Death], obviously, so he knew what tone and style we’re going for.

It's a maple top, mahogany body. There’s a Purple Heart wenge maple neck. It’s the most resonate guitar I’ve ever had. I’ll barely hit a note and it rings out forever. It’s very harmonic; it gives off a nice, warm tone.

I love my other guitars, don’t get me wrong, but I feel like they were thinner; not as beefy. This guitar is heavy, but it doesn’t lose the top-end, chainsaw-kind-of-vibe I’m going for with my pedals. It’s a nice balance of what I wanted: something thicker, without losing that edge.

Same with the pickups. I usually use active pickups, but this one has a Seymour Duncan Nazgul. They were talking about how the Nazgul is meant for lower tunings, and we play in drop c. It definitely does help with the low end.

So that Nazgul pickup in the bridge position is your only pickup. Are your other guitars set up similarly?

Honestly, that’s just for convenience. This is a different kind of anecdote, but we toured with Carcass and they don’t use any guitar pedals besides a noise suppressor and a tuner. We [realized] that one day because we let them borrow our heads. They just used our Peavey 6505s and got the Carcass tone out of the amps. It was crazy. I was like, “you don’t use any pedals?” Bill [Steer, founding Carcass guitarist] was like, “Yeah…there’s just more to go wrong.” That’s how I think about guitar now. The more knobs, the more switches, the more pickups [you have,] it’s just more shit that can go wrong.

I play heavy guitar music; I want this guitar to do one thing. Why mess with anything else? I don’t really need all the other bells and whistles when I know I’m just going to need a volume knob and one pickup. I got tired of accidentally flipping to the wrong pickup, or something around the tone knob gets knocked and it sounds all weird.

Does that mean you’ve been scaling back your rig, too?

No. As far as pedals go, I still have my BOSS DS-1 and my Tube Screamer, [as well as] a Waza Craft Chorus pedal and a delay for solos. I guess that’s a lot, but it’s not going overboard.

I feel like I’ll keep the pedalboard [as-is]. Maybe I’ll get a phaser down the road for more texture, or maybe I’ll upgrade from a DS-1 to some other type of overdrive. I always like to keep my options open, but I’m not going to have a shoegaze pedalboard.

Getting back to the Challenger, the guitar has got that swirling, purple quilted maple finish. It’s plush — regal, even. How did you end up choosing that finish?

I’m a huge Prince fan, so I wanted a purple guitar. That’s pretty much it! It’s a Prince/James Hetfield tribute: the Explorer body in purple. And Tom’s guitar that he had on that tour with the Acacia Strain was also purple, and I loved it. Like, “yo…that is a beautiful guitar.”

Nobody really has purple guitars; I think it's sick that I have one.

Earlier this summer, Creeping Death had been posting from the studio while working with Adam Dutkiewicz on your next full-length. Will the Challenger make it onto the record?

No, it sadly wasn’t ready in time. For the new record we actually used Adam’s guitars — his Caparison models [the TAT Special FX “Metal Machine” ] — which are pretty sick. They sort of felt like Jackson guitars, like a Jackson Dinky on steroids. The neck was super thin. It played super fast.

Anything you can say about the new songs?

We’re adding one new song to the set list this tour, so hopefully people jam on it. And hopefully they’ll hear the recorded version shortly thereafter.

Are you able to reveal the name of the song?

There have been a couple of working titles, so I don’t want to tell you the wrong one. I can tell you that the album will be called Boundless Domain, though. I know that for sure.

You unveiled your Challenger in an Instagram post, and in the photo there’s this big dog jumping in the foreground. Who’s that?

That’s Gizmo. He’s my roommate’s dog, but I love him. He’s a sweetheart, a good pup.

You might’ve just answered this indirectly, but who’s got more snarl: you with the Challenger, or Gizmo?

It’s definitely the Challenger. [Gizmo’s] a big baby. He gets jealous when people around him are hugging and he’s not getting any love. 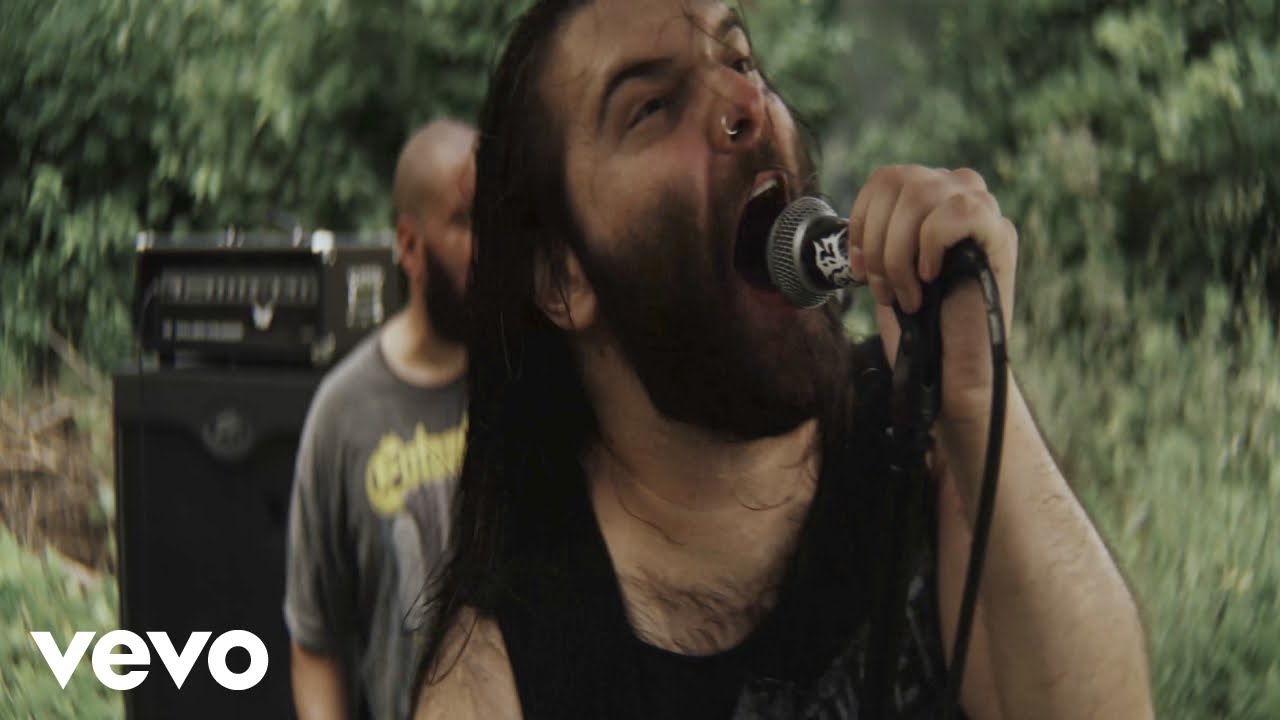 The official video for our song “The Edge of Existence.”🔔 Subscribe to the channel: https://www.youtube.com/channel/UCNMtXRoKFTiypqOPGTXYqEQ Our EP The Edg…

You just read issue #72 of Gut Feeling. You can also browse the full archives of this newsletter.