Hi there - I hope things are going well.

The educational year is winding down now. I believe it’s mostly stopped in the US, and here in the UK the summer holidays will begin in about 3 weeks. As such I’m preparing for the summer break and looking back at what I’ve done over the last year.

Last month I launched the Eraser brush on Brush Ninja, and it seems to have gone really well. There were a couple of bugs, but they weren’t major ones, and overall the improvement has been well worth the wait (I think at least).

The birth of Brush Ninja

I was looking at my photos the other day and found some early sketches of the Brush Ninja character, so I thought I’d share a little bit about how I made Brush Ninja.

You can see on the Brush Ninja about page why I started the site, but here’s a bit more about the development.

I started building the first version of Brush Ninja in 2013, at the time I was planning to make a full social network with user accounts and public galleries. This would have been very cool (and still would be), but it was too complex for me to make on my own. I just don’t have the required skills, and I got overwhelmed so I stopped working on the project entirely.

But before I stopped I made this teaser video showing what was to come: 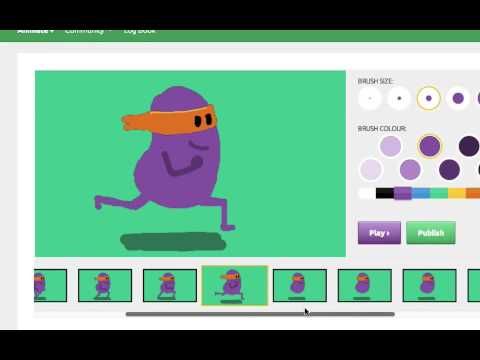 Then, 5 years later, I remembered Brush Ninja (and domain which I’d been paying for the whole time) and thought I would try again. I simplified things massively and came up with something I could build on my own.

This is what became the first public version of Brush Ninja. Version 1 was technically not the best, it was based on the code I had written 5 years before, but it worked and people visited and seemed to like using it. Which gave me the encouragement I needed to rewrite the app to make it more flexible, and powerful, so that I could continue building it for the next 10 years.

Which is where we’re at now.

Below are some sketches I made when I was trying to design the ninja mascot:

I can’t have a website called Brush Ninja () and not have a cartoon ninja on it. Can’t decide what he should look like though?

Create animations in your browser, on your desktop or phone, for free. No software needed.

I think I’m getting somewhere with the ninja for

Create animations in your browser, on your desktop or phone, for free. No software needed.

I always intended for the ninja to be more of a character that you see around the site. I’d still like to do that, so hopefully I’ll work out some fun ways to use them more in the future.

Talking of the future…

Coming up next… a couple of days ago I had an idea for a new feature that I’d like to add soon. It’s not something anyone has asked for, and I don’t know if anyone will need it, but I hope they do!

I also want to work on the features I mentioned a couple of months ago, an improved background editing experience, and more options for exporting.

I’ll probably work on these things over the summer break. I’ll let you know when there’s something to see, and if you’re a Patreon member then you’ll get to test it as well.

Thanks - and have a great July!

You just read issue #6 of Brush Ninja. You can also browse the full archives of this newsletter.